14 August 1861: “There are only three boys in the Senior class, four in the Junior, four in the Sophomore and eleven in the Freshman’s class.”

Item description:  Prior to enrolling in the University of North Carolina, John Steele Henderson attended a preparatory school near Melville, N.C. The school was run by Dr. Alexander Wilson. In this letter home to his mother, dated 14 August 1861, Henderson describes the growing number of students, particularly seniors, who are leaving Wilson’s school. He also describes the difficulty in receiving news correspondence, except for written letters, during the war. 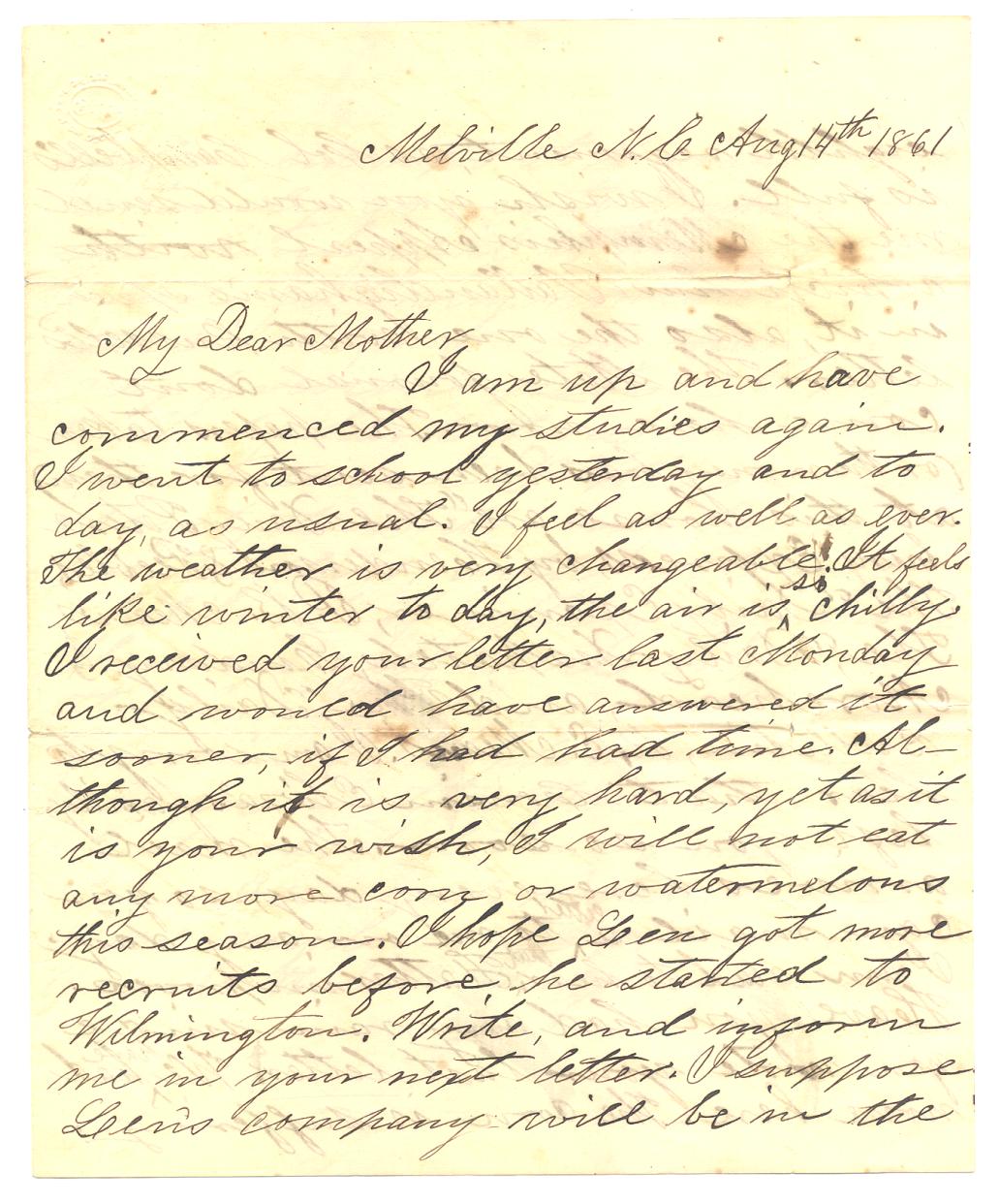 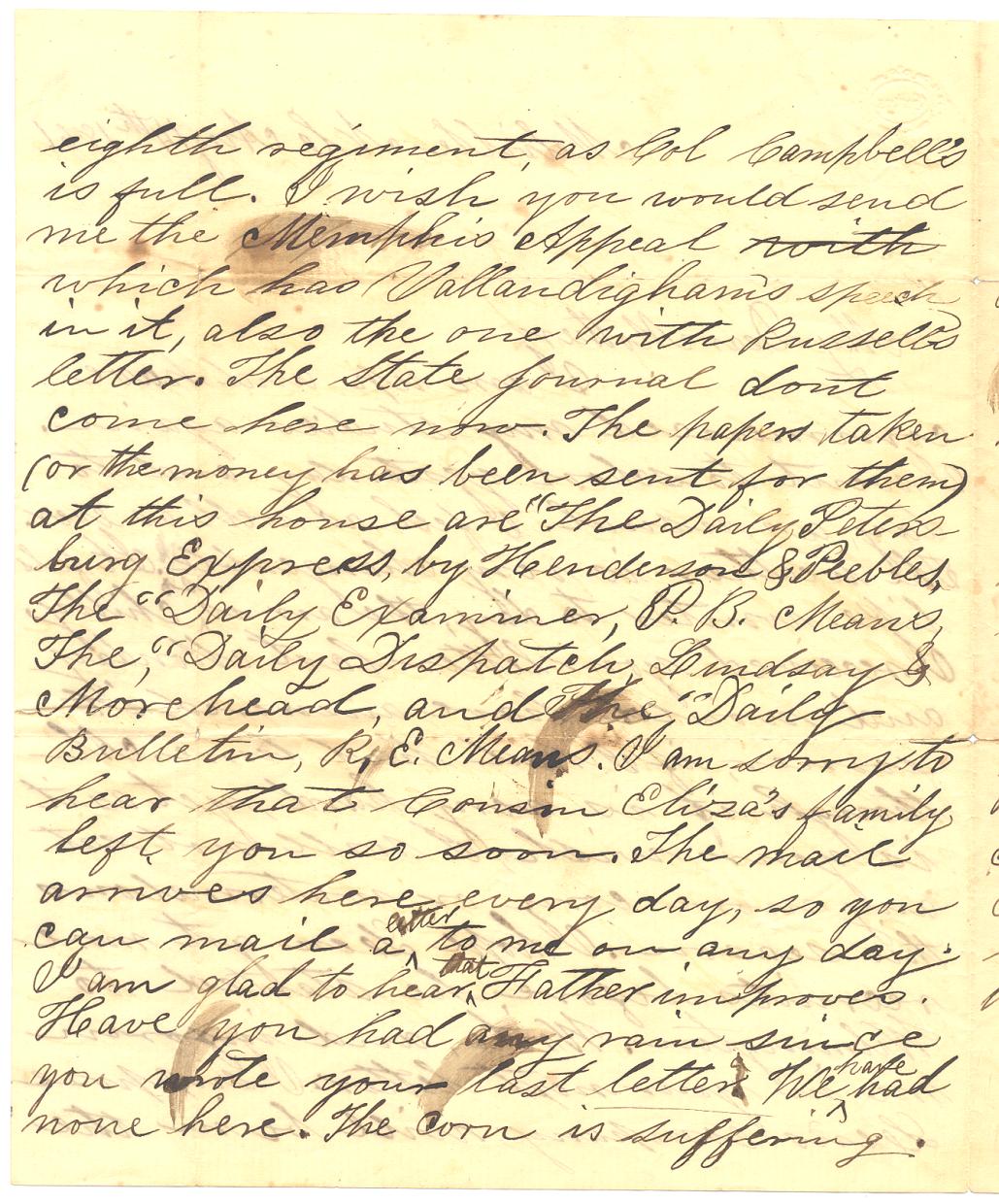 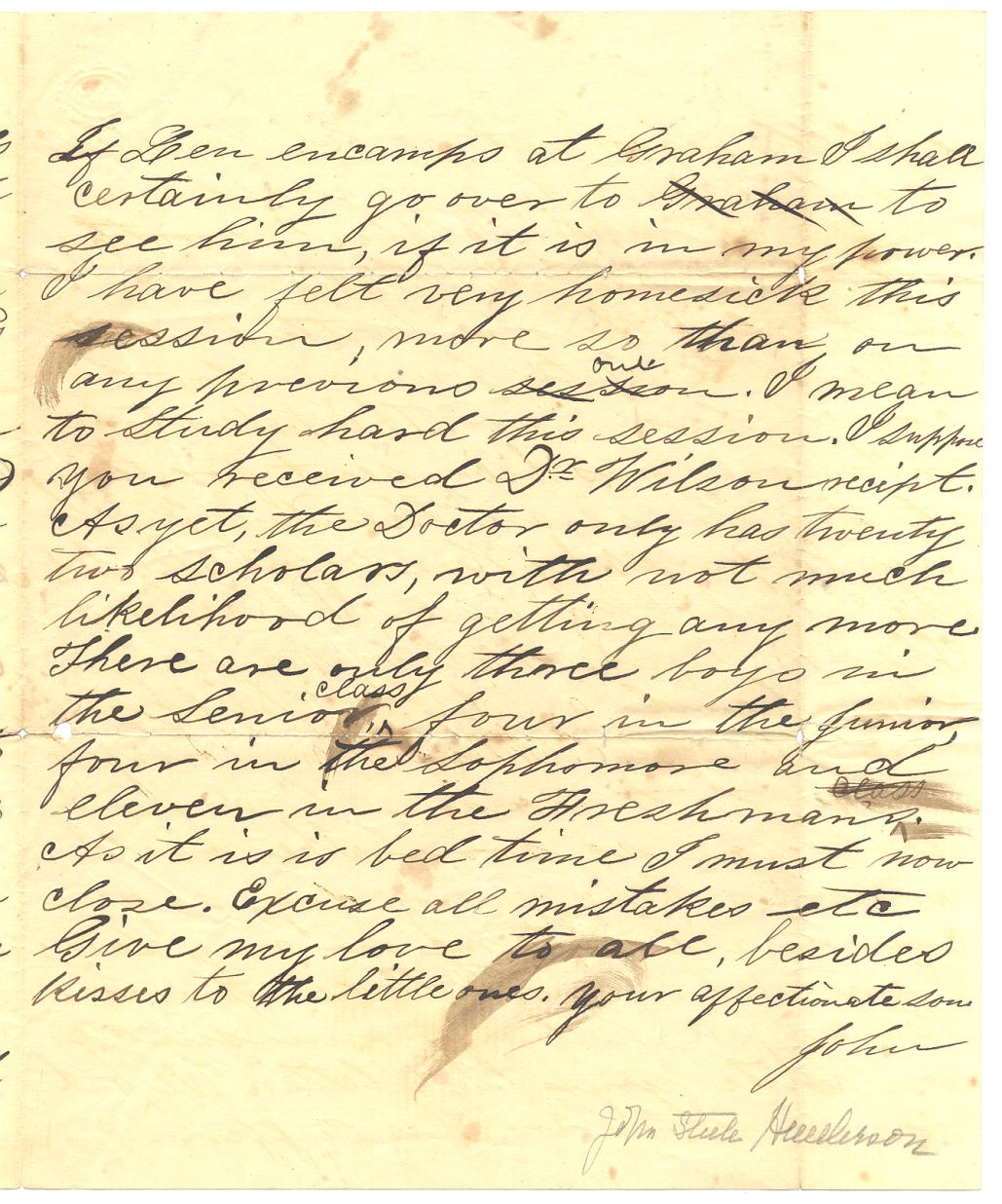 I am up and have commenced my studies again. I went to school yesterday and to day as usual. I feel as well as ever. The weather is very changeable. It feels like winter to day, the air is so chilly. I received your letter last Monday and would have answered it sooner, if I had had time. Although it is very hard, yet as it is your wish, I will not eat any more corn or watermelons this season. I hope Len got more recruits before he started to Wilmington. Write, and inform me in your next letter. I suppose Lewis company will be in the eighth regiment, as Col. Campbell’s is full. I wish you would send me the Memphis Appeal which has Vallandigham’s speech in it, also the one with Russell’s letter. The State Journal don’t come here now. The papers taken (or the money has been sent for them) at this house are “The Daily Petersburg Express, by Henderson & Peebles, The “Daily Examiner, P.B. Means, The “Daily Dispatch, Lindsay & Morehead, and The “Daily Bulletin, R.E. Means. I am sorry to hear that Cousin Eliza’s family left you so soon. The mail arrives here every day, so you can mail a letter to me on any day. I am glad to hear that Father improves. Have you had any rain since you wrote your last letter. We have had more here. The corn is suffering.

If Len encamps at Graham, I shall certainly go over to to see him, if it is in my power. I have felt very homesick this session, more so than on any previous one. I mean to study hard this session. I suppose you received Dr. Wilson receipt. As yet, the Doctor only has twenty two scholars, with not much likelihood of getting any more. There are only three boys in the Senior class, four in the Junior, four in the Sophomore and eleven in the Freshman’s . As it is is bed time I must now close. Excuse all mistakes etc. Give my love to all, besides kisses to the little ones. Your affectionate son,

John Steele Henderson, member of the North Carolina General Assembly, United States congressman, city planner, lawyer, and a founder of rural free delivery of the mail, was born in Salisbury, N.C., on 6 January 1846, the son of Archibald II and Mary Ferrand Henderson, a descendant of General John Steele, comptroller of the United States Treasury under Washington, Adams, and Jefferson. John S. Henderson was educated at Alexander Wilson’s school in Alamance County, N.C., and entered the University of North Carolina in January 1862. Five months after the death of his brother at Cold Harbor on 1 June 1864, Henderson, at the age of 18, left the University and enlisted as a private in Company B, 10th North Carolina Regiment. [Continue reading…]