12 October 1861: “The regiments charged up the hill in gallant style and took possession of a stove pipe!!!”

Posted on 12 Oct ’11 by Biff Hollingsworth 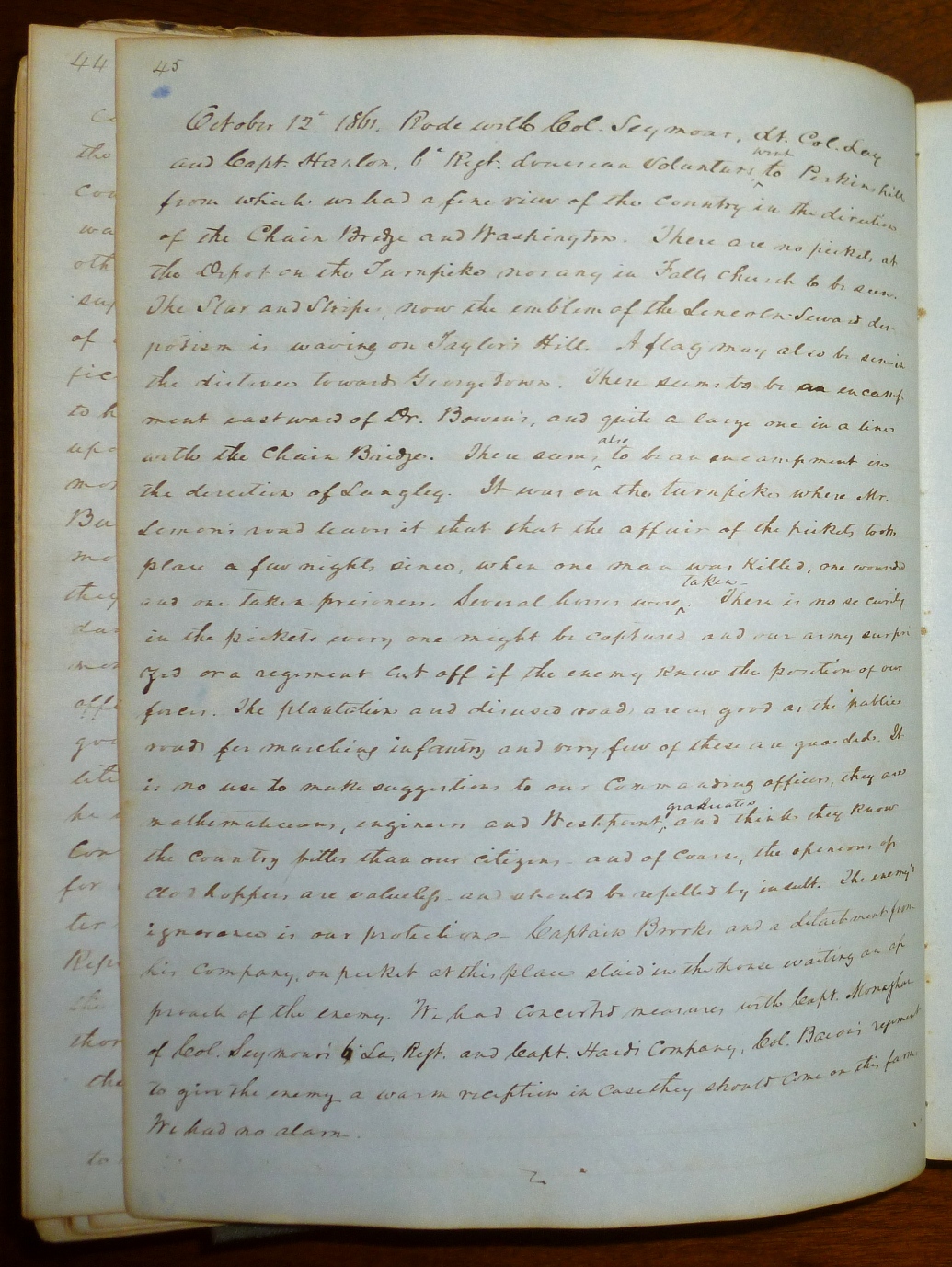 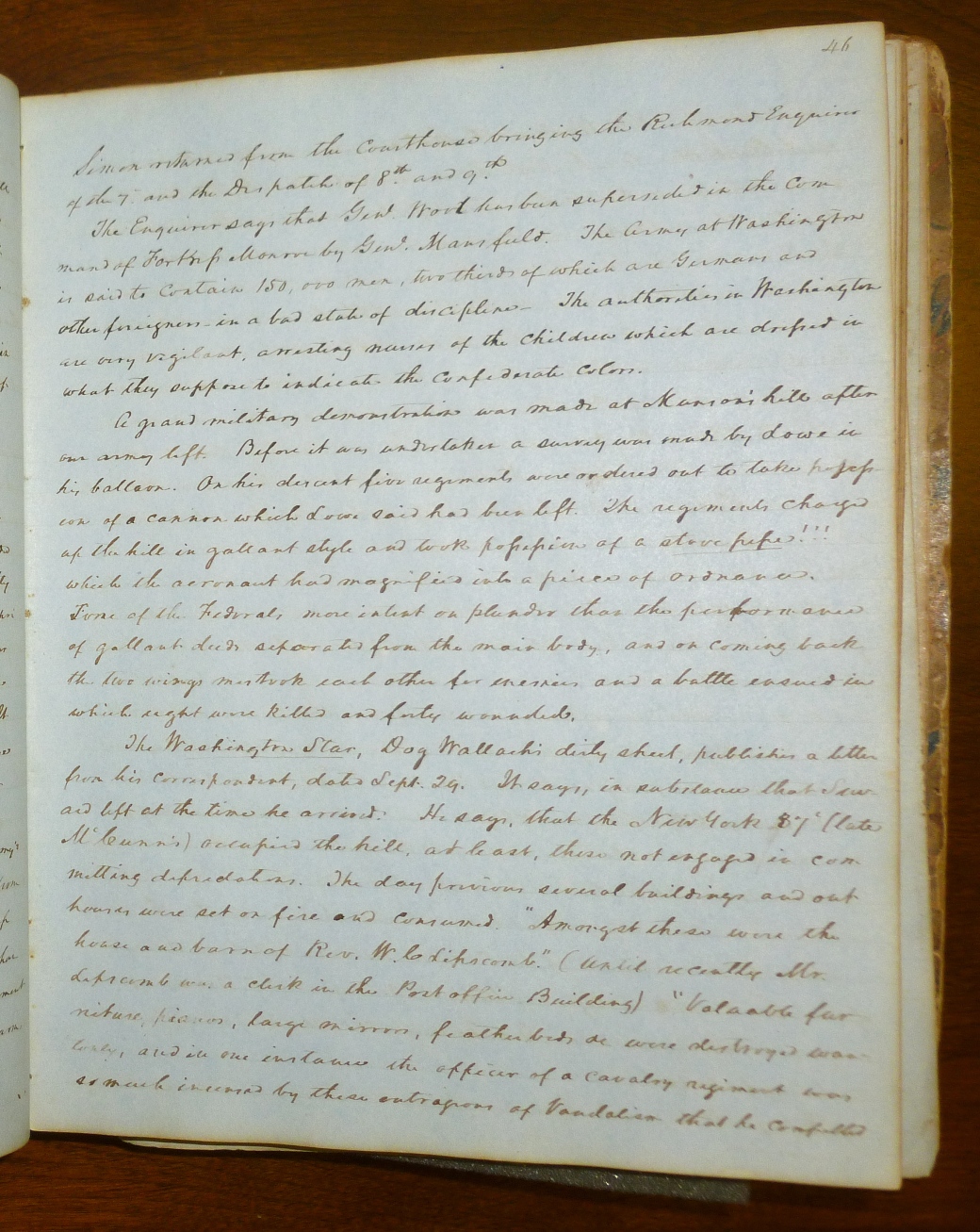 Rode with Col. Seymour, Lt. Col. Lay and Capt. [H?], 6th Regt. [?] Volunteers to Perkinsville from which we had a fine view of the country in the direction of the Chain Bridge and Washington. There are no pickets at the Depot on the Turnpike nor any in Falls Church to be seen.

The Star and Stripes, now the emblem of the Lincoln-Seward despotism is waving toward Georgetown. There seems to be encampment eastward of Dr. Bowen’s, and quite a large one in a line with the Chain Bridge. There seems also to be an encampment in the direction of Langley. It was on the turnpike where Mr. [L?] road leaves it that that the affair of the pickets took place a few nights since, when one man was killed, one wounded and one taken prisoner. Several horses were taken. There is no security in the pickets every one might be captured and our army surprized or a regiment cut off if the enemy knew the position of our forces. The plantation and discused road, are as good as the public road for marching infantry and very few of these are guarded. It is no use to make suggestions to our commanding officers, they are mathematicians, engineers, and Westpoint graduates, and think they know the country better than our citizens, and of coarse, the opinions of clodhoppers are valueless and should be repelled by insult. The enemy’s ignorance is our protection. Captain [B?] and a detachment from his company, on picket at this place staid in the house waiting an approach of the enemy. We had concerted measures, with Capt. [M?] of Col. Seymour’s 6 La. Regt. and Capt. [H?] Company, Col. [B?] regiment to give the enemy a warm reception in case they should come on this farm. We had no alarm.

Simon returned from the Courthouse bringing the Richmond Enquirer of the 7th and the Dispatch of 8th and 9th.

The Enquirer says that Genl. Wool has been superseded in the command of Fortress Monroe by Genl. Mansfield. The Army at Washington is said to contain 150,000 men, two thirds of which are Germans and other foreigner in a bad state of discipline. The authorities in Washington are very vigilant, arresting many of the children which are dressed in what they suppose to indicate the confederate colors.

A grand military demonstration was made at Munson’s Hill after our army left. Before it was undertaken a survey was made by Lowe in his balloon. On his descent five regiments were ordered out to take possession of a cannon which Lowe said had been left. The regiments charged up the hill in gallant style and took possession of a stove pipe!!! Which the aeronaut had magnified into a piece of ordnance.

Some of the Federals more intent on plunder than the performance of gallant deeds separated from the main body, and on coming back the two wings mistook each other for enemies and a battle ensued in which eight were killed and forty wounded.

More about the H.C. Williams Journal:

H. C. Williams (fl. 1845-1861) appears to have been a well-off landowner living in the vicinity of Fairfax Courthouse, Va., during the first Battle of Bull Run. H. C. Williams’s son, Frank Williams (fl. 1861), was regularly employed as a scout between July and December 1861 by Confederate Brigadier General Milledge Bonham (1813-1890). The Civil War era journal of H. C. Williams of Virginia describes troop movements of both the Union army and the Confederate army in and around Fairfax Courthouse, Va., during the period between the first Battle of Bull Run on 21 July 1861 and 26 December 1861. Williams also summarized or copied many newspaper articles on military life and about the course of the war during this time period, including reports of infantry and naval campaigns. In October 1861, Williams reported observing a balloon reconnaissance of Confederate troop positions by Professor Thaddeus S. C. Lowe (1832-1913).