12 January 1862: “If there is an honorable road to get home, I shall spare no effort to find it as speedily as possible.”

Item description: Letter from Elisha Franklin Paxton to his wife, Elizabeth, dated 12 January 1862. Paxton is frustrated at being denied a furlough while other officers of equal rank have been receiving them. He informs his wife that he is resigning his commission, but feels that his resignation will probably be rejected by his commanding officers. He also encourages her to “take care of what we have as well as you can” and to “devote yourself to the babies and the farm.” Included in this selection is his letter of resignation, including various endorsements as it made its way through the chain of command, and a letter withdrawing his resignation. 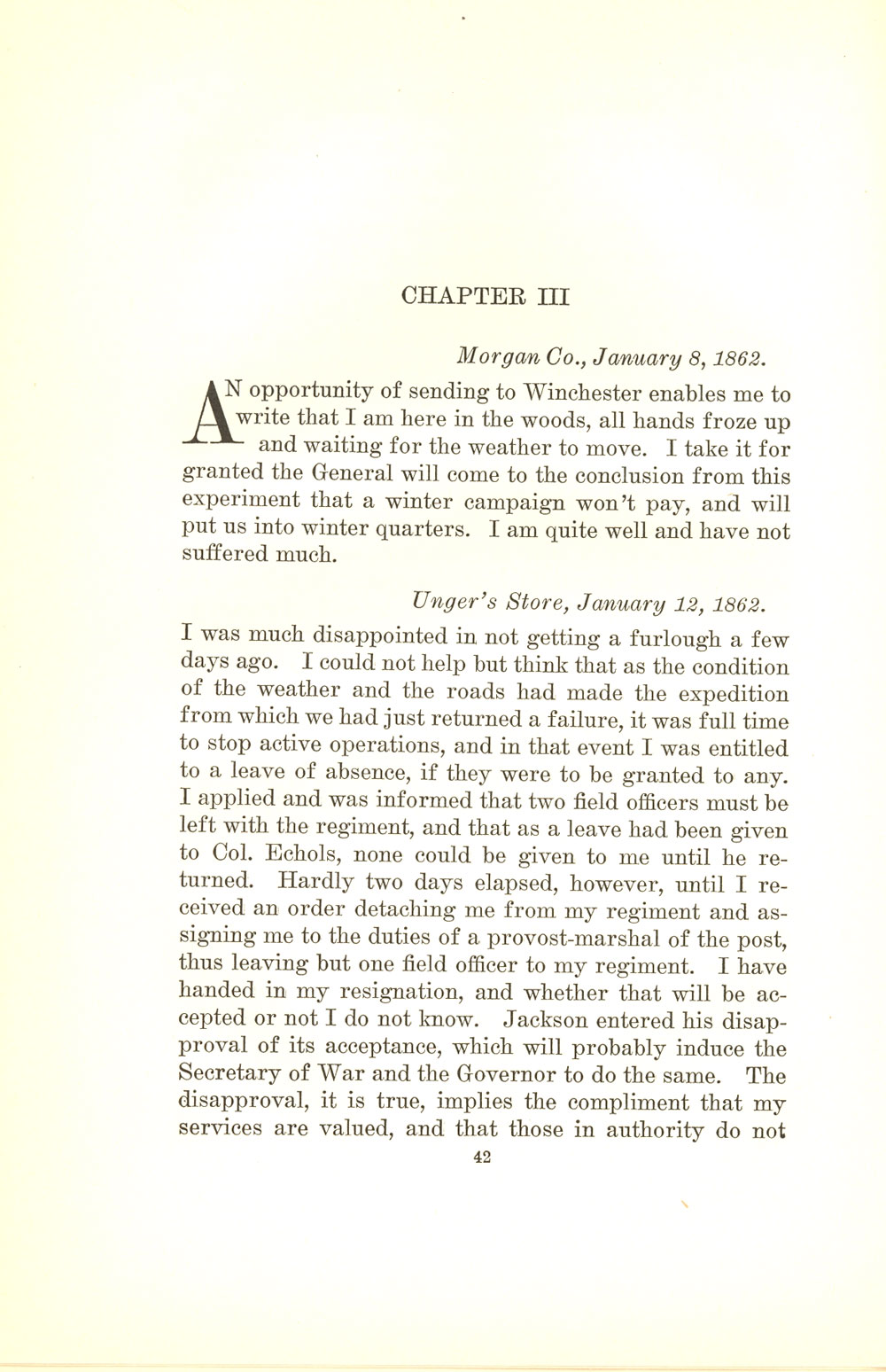 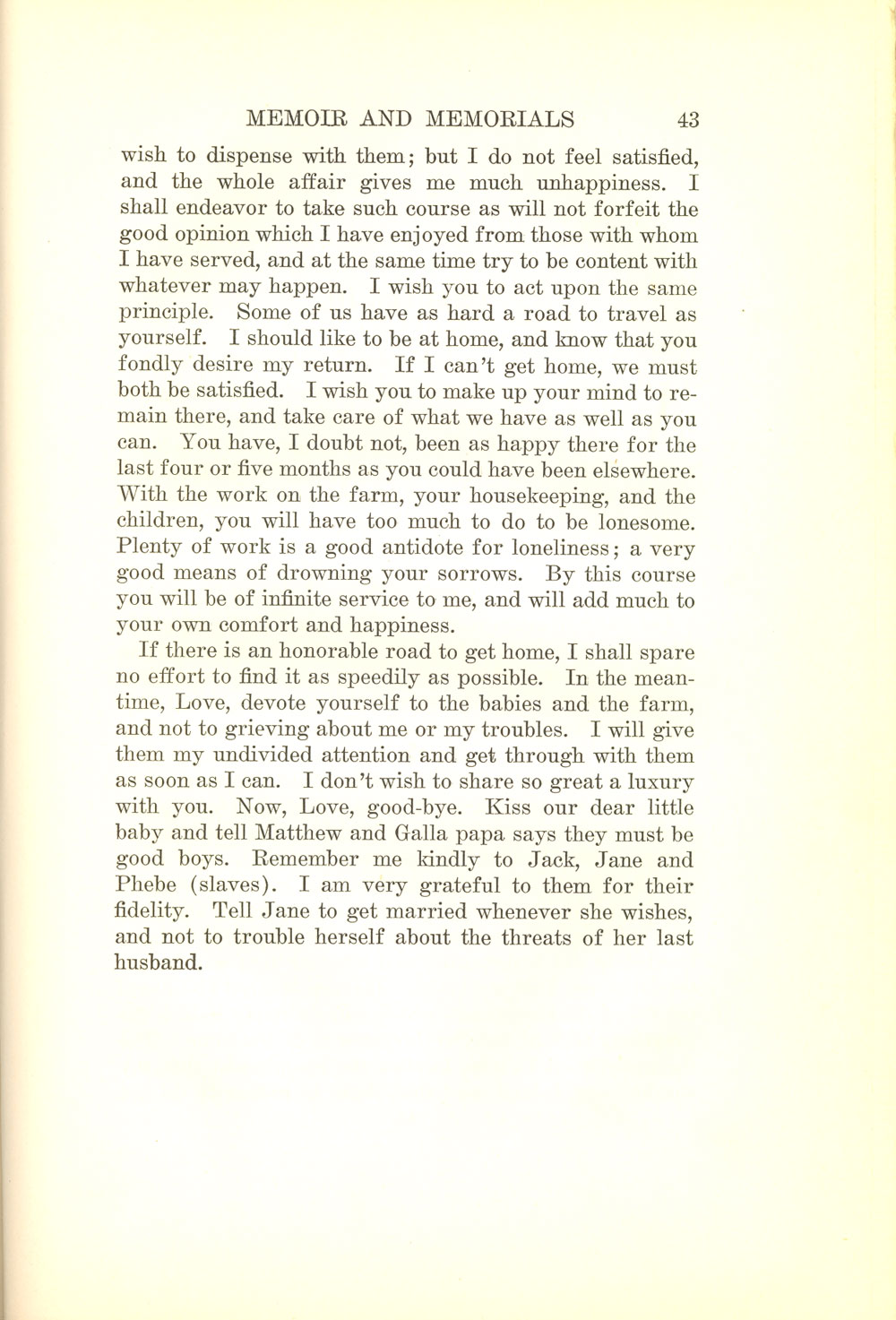 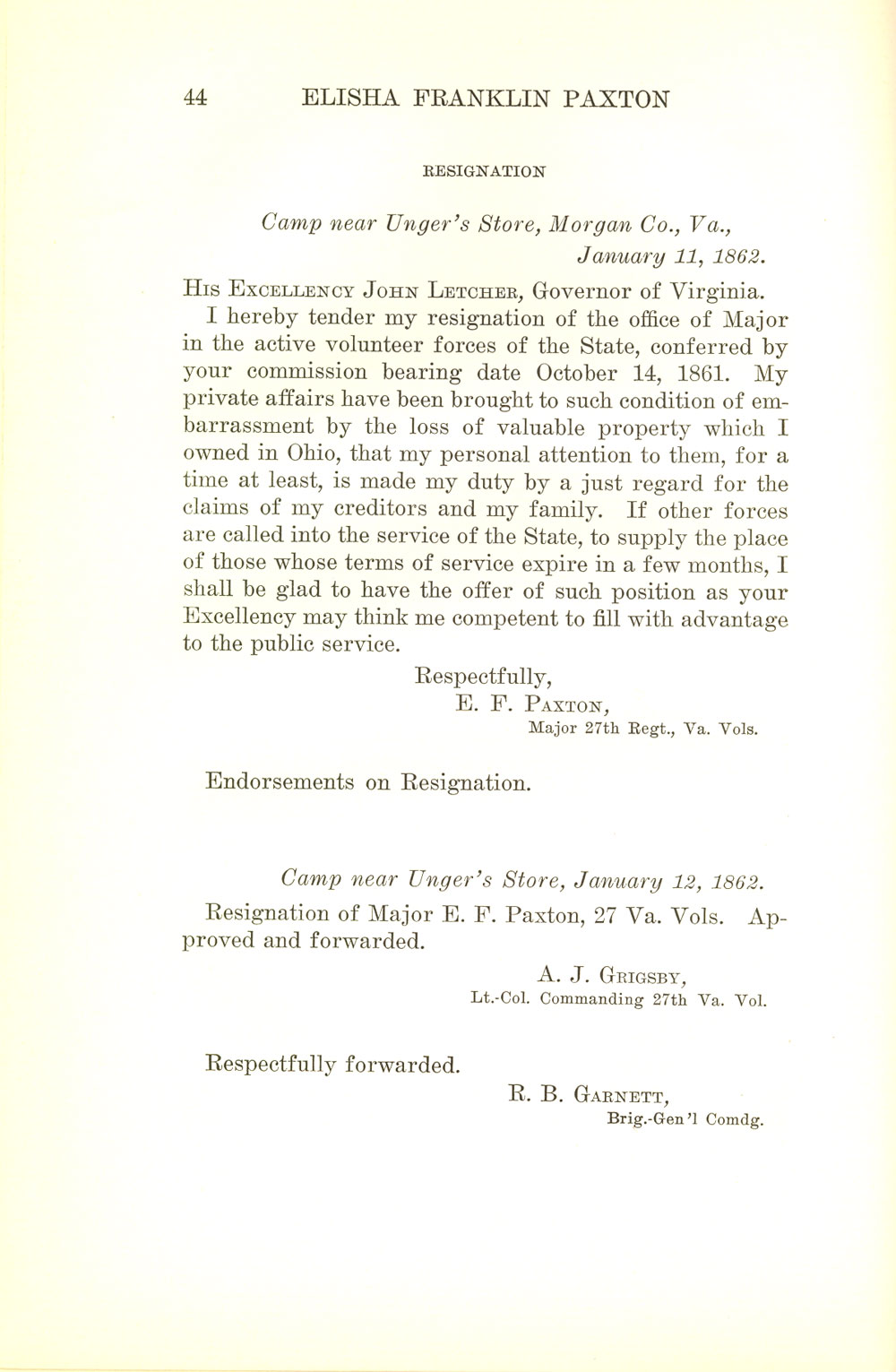 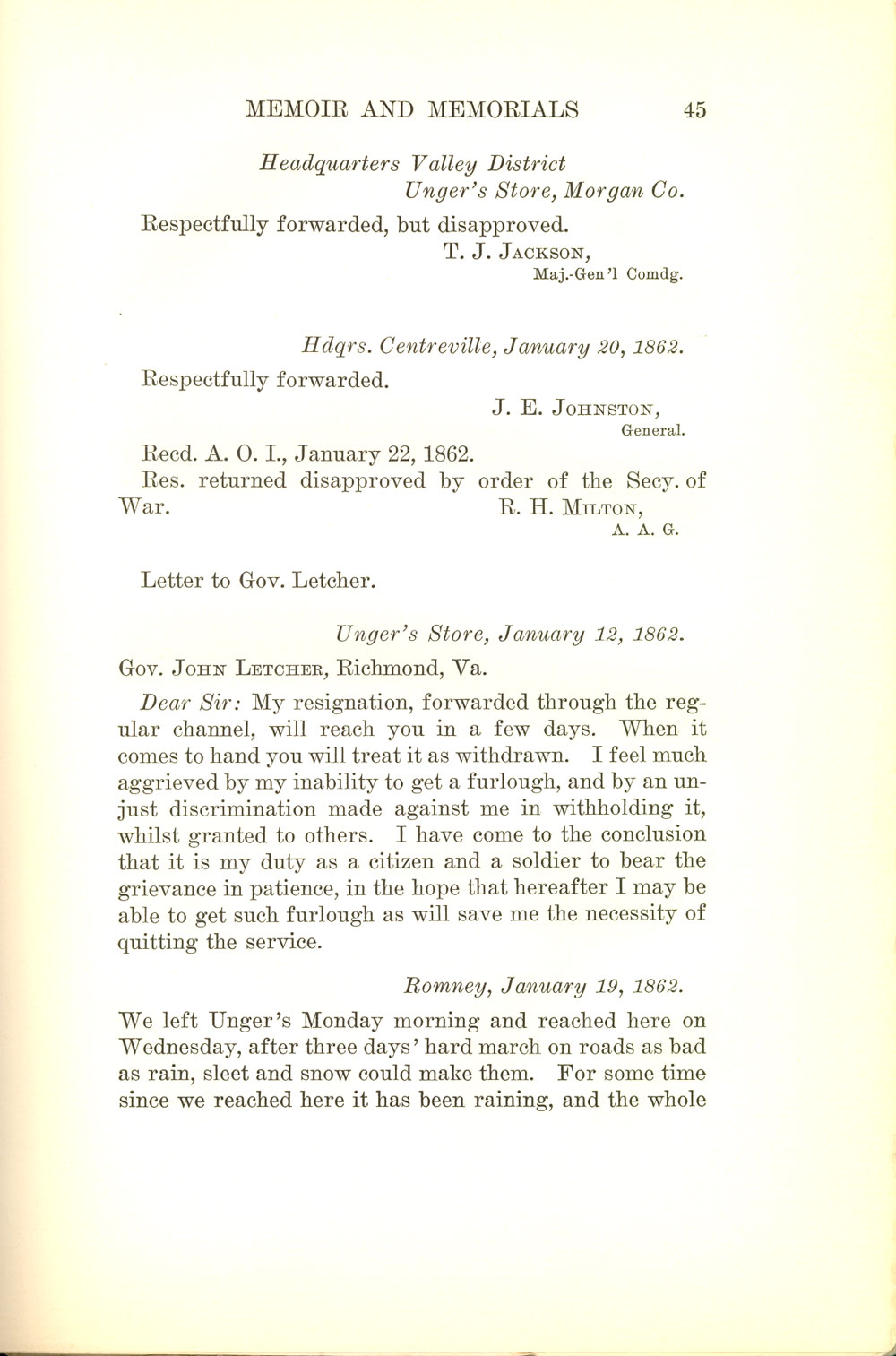 I was much disappointed in not getting a furlough a few days ago. I could not help but think that as the condition of the weather and the roads had made the expedition from which we had just returned a failure, it was full time to stop active operations, and in that event I was entitled to a leave of absence, if they were to be granted to any. I applied and was informed that two field officers must be left with the regiment, and that as a leave had been given to Col. Echols, none could be given to me until he returned. Hardly two days elapsed, however, until I received an order detaching me from my regiment and assigning me to the duties of a provost-marshal of the post, thus leaving but one field officer to my regiment. I have handed in my resignation, and whether that will be accepted or not I do not know. Jackson entered his disapproval of its acceptance, which will probably induce the Secretary of War and the Governor to do the same. The disapproval, it is true, implies the compliment that my services are valued, and that those in authority do not
Page 43

wish to dispense with them; but I do not feel satisfied, and the whole affair gives me much unhappiness. I shall endeavor to take such course as will not forfeit the good opinion which I have enjoyed from those with whom I have served, and at the same time try to be content with whatever may happen. I wish you to act upon the same principle. Some of us have as hard a road to travel as yourself. I should like to be at home, and know that you fondly desire my return. If I can’t get home, we must both be satisfied. I wish you to make up your mind to remain there, and take care of what we have as well as you can. You have, I doubt not, been as happy there for the last four or five months as you could have been elsewhere. With the work on the farm, your housekeeping, and the children, you will have too much to do to be lonesome. Plenty of work is a good antidote for loneliness; a very good means of drowning your sorrows. By this course you will be of infinite service to me, and will add much to your own comfort and happiness.

If there is an honorable road to get home, I shall spare no effort to find it as speedily as possible. In the meantime, Love, devote yourself to the babies and the farm, and not to grieving about me or my troubles. I will give them my undivided attention and get through with them as soon as I can. I don’t wish to share so great a luxury with you. Now, Love, good-bye. Kiss our dear little baby and tell Matthew and Galla papa says they must be good boys. Remember me kindly to Jack, Jane and Phebe (slaves). I am very grateful to them for their fidelity. Tell Jane to get married whenever she wishes, and not to trouble herself about the threats of her last husband.
Page 44

I hereby tender my resignation of the office of Major in the active volunteer forces of the State, conferred by your commission bearing date October 14, 1861. My private affairs have been brought to such condition of embarrassment by the loss of valuable property which I owned in Ohio, that my personal attention to them, for a time at least, is made my duty by a just regard for the claims of my creditors and my family. If other forces are called into the service of the State, to supply the place of those whose terms of service expire in a few months, I shall be glad to have the offer of such position as your Excellency may think me competent to fill with advantage to the public service.

Dear Sir: My resignation, forwarded through the regular channel, will reach you in a few days. When it comes to hand you will treat it as withdrawn. I feel much aggrieved by my inability to get a furlough, and by an unjust discrimination made against me in withholding it, whilst granted to others. I have come to the conclusion that it is my duty as a citizen and a soldier to bear the grievance in patience, in the hope that hereafter I may be able to get such furlough as will save me the necessity of quitting the service.