15 June 1862:”‘Secesh’ came over to Hutchinson’s Island and carried off some of the people, and so General Hunter has removed all remaining to Beaufort…”

Posted on 15 Jun ’12 by Biff Hollingsworth

Image description: Entry, dated 15 June 1862, from the diary of Laura Towne. Towne (1825-1901) came to St. Helena as part of the Port Royal Relief Group of Pennsylvania, an abolitionist group that came to Beaufort, S.C. and the surrounding Sea Islands after the Union Army seized control of the area in April 1862 and slaveowners abandoned their property and enslaved populations to flee to Confederate forces. The Port Royal Relief Group came to help educate the formerly enslaved community on the islands, and Laura Towne, along with her colleague Ellen Murray, played an integral role in founding the Penn School on St. Helena Island. Towne wrote frequently in her diary, including descriptive details about the African American community on St. Helena and around the Sea Islands, the establishment of the School, relationships with Union Soldiers, and hostile relations with Confederate soldiers and sympathizers.

In this entry, Towne notes a fear that looms with the inhabitants of Beaufort and the Sea Islands – attack by “Secesh”, or Confederate Soldiers. She also notes the presence of Major General David Hunter of the Union Army, who served commander of the Department of the South heaquartered in Beaufort. 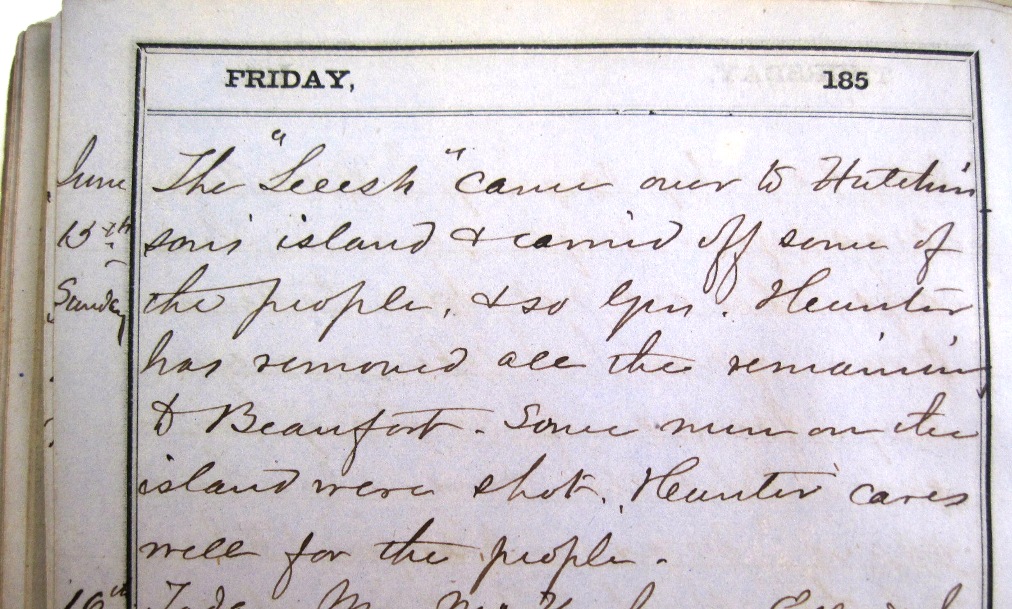 The “Secesh” came over to Hutchinson’s Island and carried off some of the people, and so General Hunter has removed all remaining to Beaufort. Some men on the island were shot. Hunter cares well for the people.