15 July 1862: “…We have been compelled by the pressure of our enemies to give up more of our mother state to their brutal army.”

Item description: Letter, 15 July 1862, from Robert W. Parker of the 2nd Virginia Cavalry to his wife, Rebecca Louise Fitzhugh Walker Parker, at home in Bedford County, Va. Parker wrote of his company’s retreat from Culpeper to Rapidan Station, the burning of a railroad bridge by the enemy, pending reinforcements from Generals Jackson and Ewell, civilians who falsely reported enemy advances, and conscripts looking to return home. He also related information, including illnesses and death, about other members of the 2nd Virginia Cavalry who were acquaintances of the Parker family. 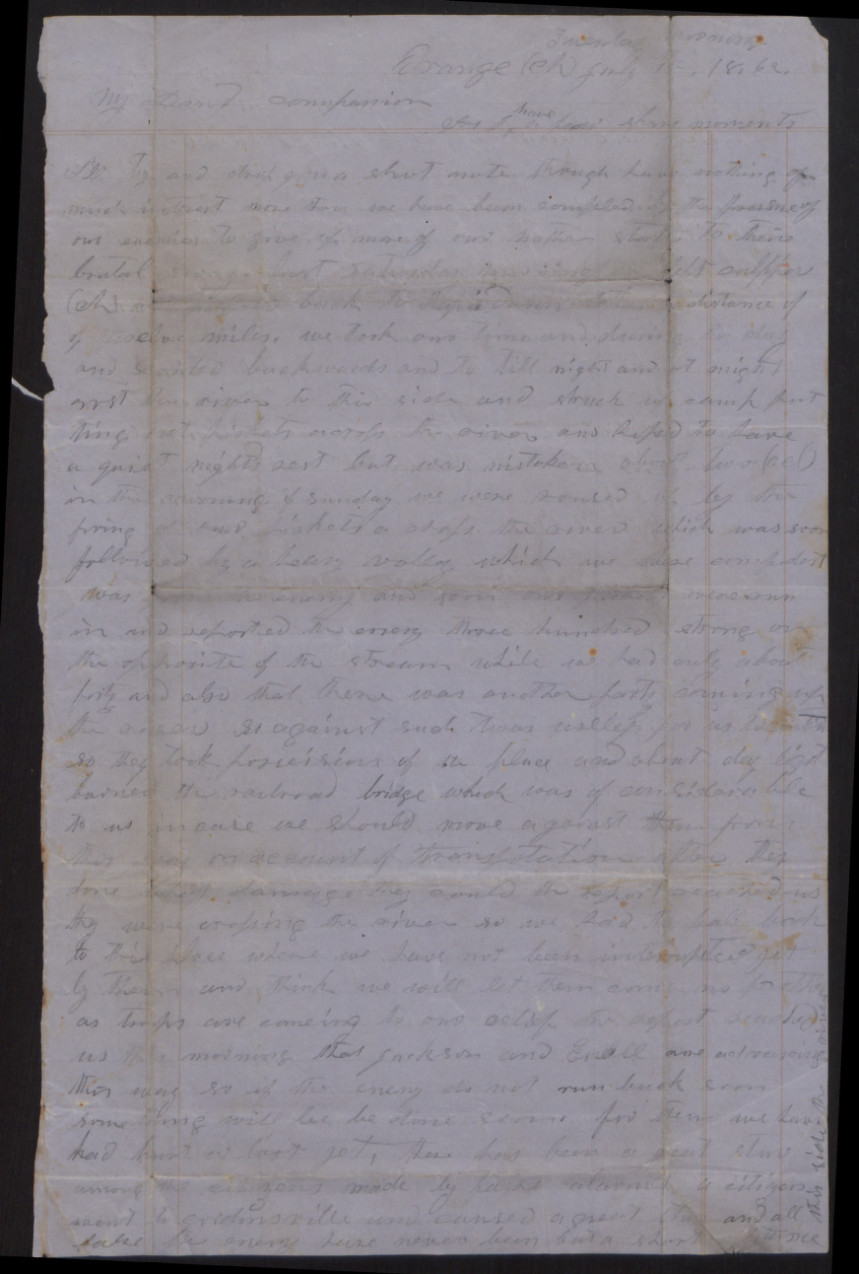 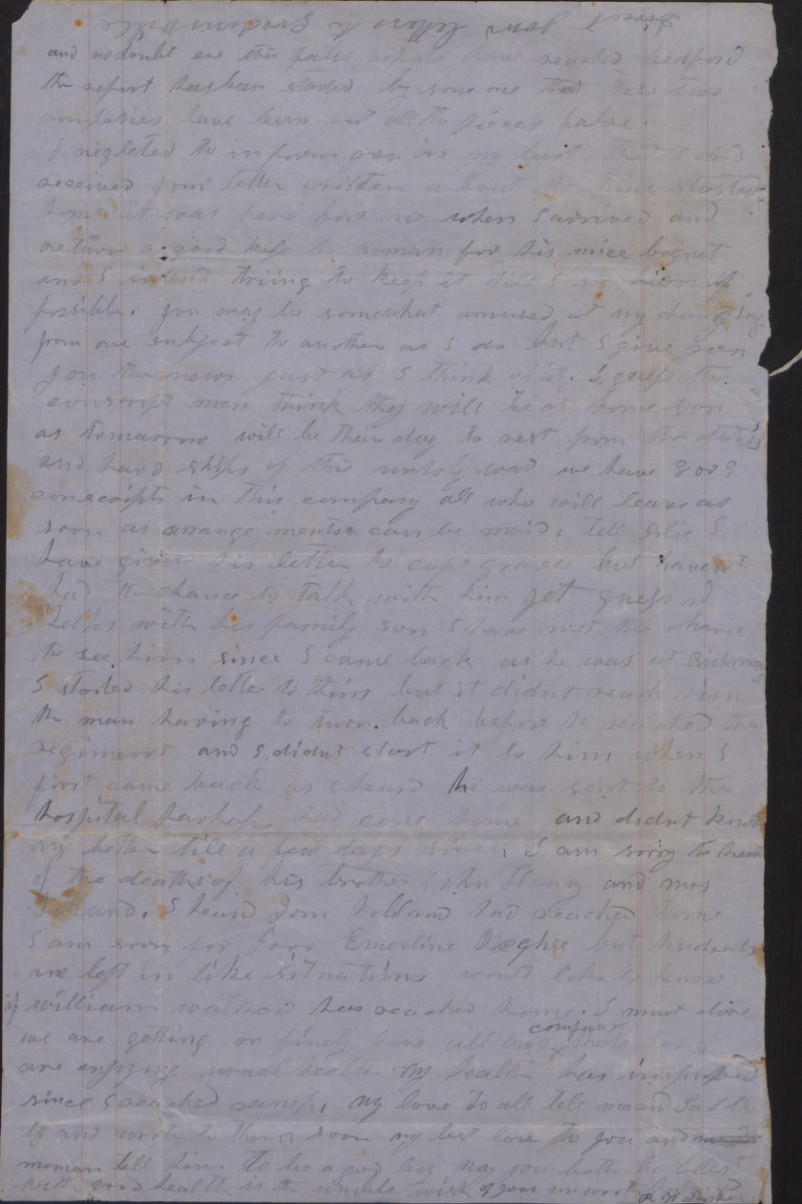 As I have a few spare moments, I’ll try and drop you a short note, though have nothing of much interest more than we have been compelled by the pressure of our enemies to give up more of our mother state to their brutal army. Last Saturday we left Culpeper CH [and] are falling back to Rapidan Station, a distance of twelve miles. We took our time and during the day and skirted backwards and to till night, and at night crossed the river to this side and struck up camp, putting our pickets across the river, and hoped to have a quiet night’s rest, but was mistaken. About two o’cl. in the morning of Sunday we were roused up by the firing of our pickets across the river, which was soon followed by heavy volley, which we were confident was from the enemy. And soon our pickets were run in and reported the enemy three hundred strong on the opposite of the stream, while we had only about forty, and also that there was another forty coming up the rear. So against such ’twas useless for us to combat, so they took possession of the place and about daylight burned the railroad bridge, which was considerable to us, in case we should move against their front. This was on account of transportation. After they done what damage they could, the report reached us they were crossing the river, so we had to fall back to this place, where we have not been interrupted yet by them, and think we will let them come no farther, as troops are coming to our relief. The report reached us this morning that Jackson and Ewell are advancing this way, so if the enemy do not run back soon, something too will be done soon for them. We have had [none] hurt or lost yet.

There has been a great stir among the citizens made by false alarms. A citizen went to Gordonsville and caused a great stir, and all false. The enemy has never been but a short distance this side the river, and no doubt ere this false reports have reached Bedford. The report has been started by someone that these two companies have been cut all to pieces- false.

I neglected to inform you in my last that I had received you letter written about the time [I] started home. It was there for me when I arrived, and return a good kiss to Moorman for his nice [bayonet], and I intend trying to keep it till I see him, if possible. You may be somewhat amused at my changing from subject to another as I do, but I give you the news just as I think of it. I guess the conscript men think they will be home soon, as tomorrow will be their day to rest from the duties and hardships of this unholy war. We have 8 or 9 conscripts in this company, all who will leave as soon as arrangements can be made. Tell Alick I have given his letter to Capt. Graves but haven’t had the chance to talk with him yet. Guess W. Phelps with his family soon. I have not the chance to see him since we came back, as he was at Richmond. I started his letter to him but it didn’t reach him, the man having to turn back before he reached the regiment, and I didn’t start it to him when I first came back as I heard he was sent to the hospital, perhaps had come home, and didn’t know any better till a few days since. I am sorry to hear of the deaths of his brother John Henry and Mr. Holland. I heard Tom Holland had reached home. I am sorry for poor Emaline McGee, but hundreds are left in like situations. Would like to know if William Walker has reached home.

I must close. We are getting on finely here. All our company that’s here are enjoying usual health. My health has improved since we reached camp. My love to all. Tell ma and Pa I’ll try and write them soon. My best love to you and health is the humble wish of your unworthy husband,