4 August 1862: “This morning early, I rode out to Genl. Lee’s Head Quarters and reported for duty.”

More about Jeremy Francis Gilmer:
Jeremy Francis Gilmer was born in Guilford County, N.C., on 23 February 1818. He entered the United States Army as a Second Lieutenant of Engineers in July 1839 after graduating from the United States Military Academy. He continued as an United States Army Engineer, constructing fortifications and conducting surveys until 1861, when he resigned in support of the southern cause. In September 1861, Gilmer was appointed Major of Engineers in the Confederate States of America Army and served as Chief Engineer of the staff of General A. S. Johnston until the general’s death at the battle of Shiloh on 6 April 1862, where Gilmer was also severely wounded.

After his recovery, Gilmer served for a short time with the Army of Northern Virginia. On 9 August 1862, he was assigned to the Office of Chief of Engineer Bureau in Richmond, Va., and promoted to the rank of Colonel of Engineers. Promoted to Major General on 20 August 1863, Gilmer was ordered to Charleston, S.C., to direct the defense of the city. He returned to Richmond in June 1864, where he directed the Engineer Bureau until the end of the War. In the fall of 1865, Gilmer was elected a director of the Georgia Central Railroad and later served as president pro tem. In 1866, he was elected president of the Savannah Gas-Light Company, an office he held along with director, Georgia Central Railroad, until his death on 1 December 1883. 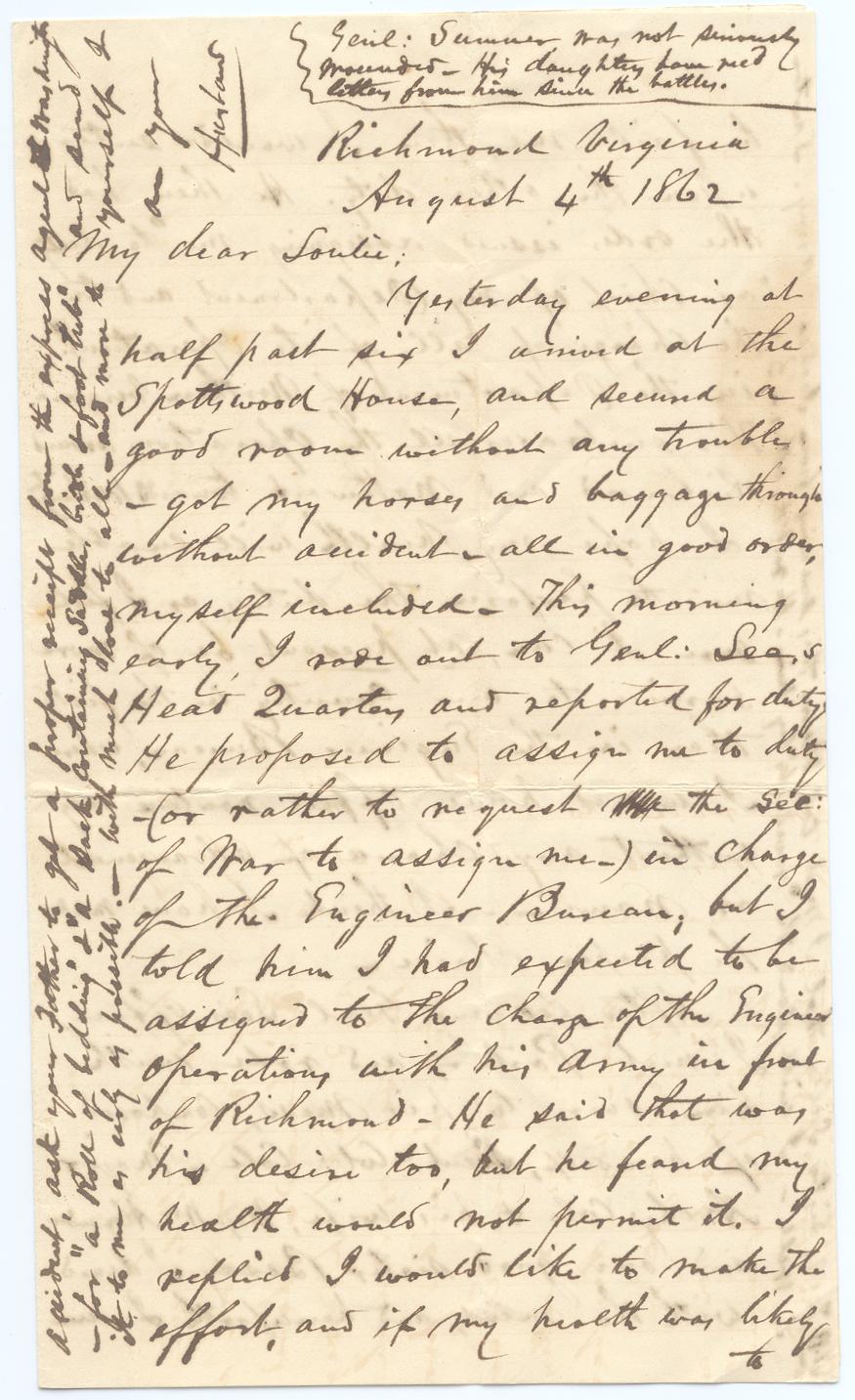 {Genl. Sumner was not seriously wounded. His daughters have recd. letters from him since the battles.}

Yesterday evening at half past six I arrived at the Spottswood House, and secured a good room without any trouble – got my horses and baggage through without accident – all in good order, myself included. This morning early, I rode out to Genl. Lee’s Head Quarters and reported for duty. He proposed to assign me to duty – (or rather to request the Sec. of War to assign me.) in charge of the Engineer Bureau; but I told him I had expected to be assigned to the charge of the Engineer operations with his army in front of Richmond – He said that was his desire too, but he feared my health would not permit it. I replied I would like to make the effort, and if my health was likely to fail me, then I would enter upon the other duty. He then had the order issued assigning me “to duty as chief of my Department and to the charge of all of its operations.” in the Department of Northern Virginia. This embraces all the operations around Richmond and Northward toward Washington.

I hope my health will enable me to perform the duties, as I feel sure I can, at present, be of more service to our country in the field than in the Engineer Bureau, where I would have office routine only without any chance of advancement or name. I think I have made the proper choice.

After leaving Genl. Lee’s office, I met Porter, and rode with him over to his mess, composed of himself, Lieut. Col. Cole, Major Archy. Cole & his wife, Maj. Wm. Alexander and our good sister Bessy. I dined with the mess, and henceforth I am to be a member of the same which will be very pleasant to us all. I found all pretty well. Porter is thin for him, but still he appears to be pretty well. Bessy is about as usual. Their little daughter- Sesesch – alias Bessy – is a very pretty and attractive child. I fell quite in love with her at first sight. Bessy expects to remain here for some time, as long as things remain as quiet as they do now. Mrs. Archy Cole is not well & was not out to day, so I did not see her.

Both Mrs. Long & Mrs. McLean are here, and I had a chat of an hour with them in the parlor of this Hotel (Spottswood) just before writing this note. Mrs. Long looks pretty well, and is quite cheerful. She is staying with a Mrs. Robinson about 17 miles from Richmond, and came here some time ago to see her father when she thought he was a prisoner. She expects to return to Mrs. R’s in a day or two, and requests me to say to you that you must write to her and address your letter. “Lieut. Col. Long, “for Mrs. Long. Care of Genl. R.E. Lee, Richmond, Va.”  By the bye, address my letters to care of Genl. Lee, we will get them more promptly.

There seems to be nothing new in the condition of things around this city. Genl. Lee, I think, considers it possible that McClellan may attempt an advance upon Petersburg, up the south side of the Appomattox, but not very probable. The impression is that the army in front of Jackson will be reinforced largely & an attempt be made to drive him back. With the force that Jackson has now, this will not be easy to do. Tomorrow I will transfer from this Hotel to “our mess” on the Williamsburg Road, two miles from the center of the city. My bedding & saddle & foot tub, sent by express have not arrived. To provide for accident, ask your father to get a proper receipt from the express agent at Washington – for “a Roll of bedding” & “a sack containing saddle, bath & foot tub” and send it to me as early as possible.

– with much love to all, and more to yourself.

I am your
Husband

N.B. Tell Sister Sally that I met Col. Berry this evening from Jackson’s Army. Lawton is well. I will send the “Havelock” by him. He recd. the other 3.