24 March 1864: “…as I mentioned yr name a flush spread over her and there was a momentary flash of the eye as if I was treading on forbidden ground.”

Posted on 24 Mar ’14 by Biff Hollingsworth

Item description: Letter, dated 24 (and 27) March 1864, from George S. Barnsley to Lancelot Minor “Lanty” Blackford.  Barnsley writes about his time as a surgeon in Richmond, and also discusses gossip regarding Blackford’s brother and a popular “Miss Jennie.” 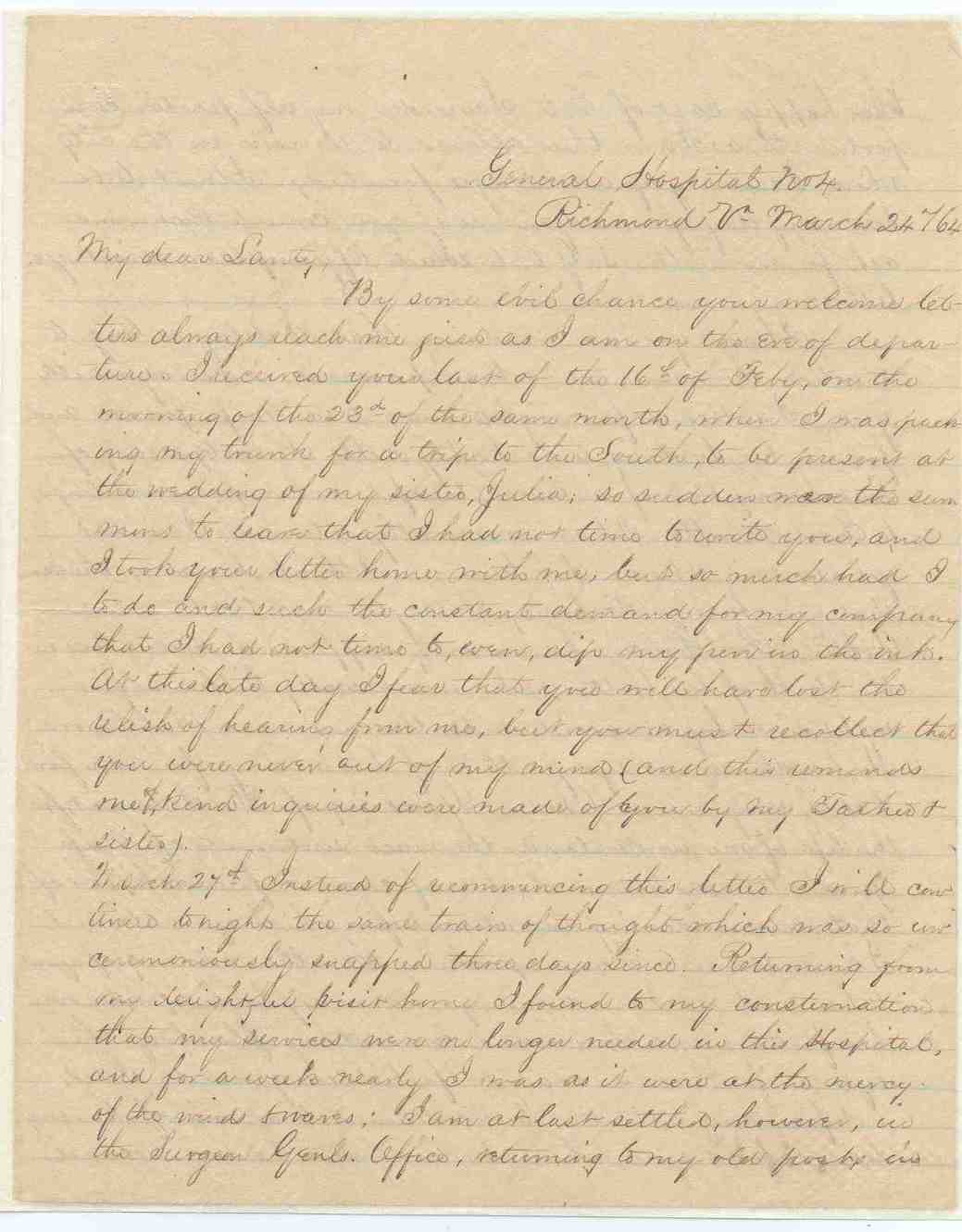 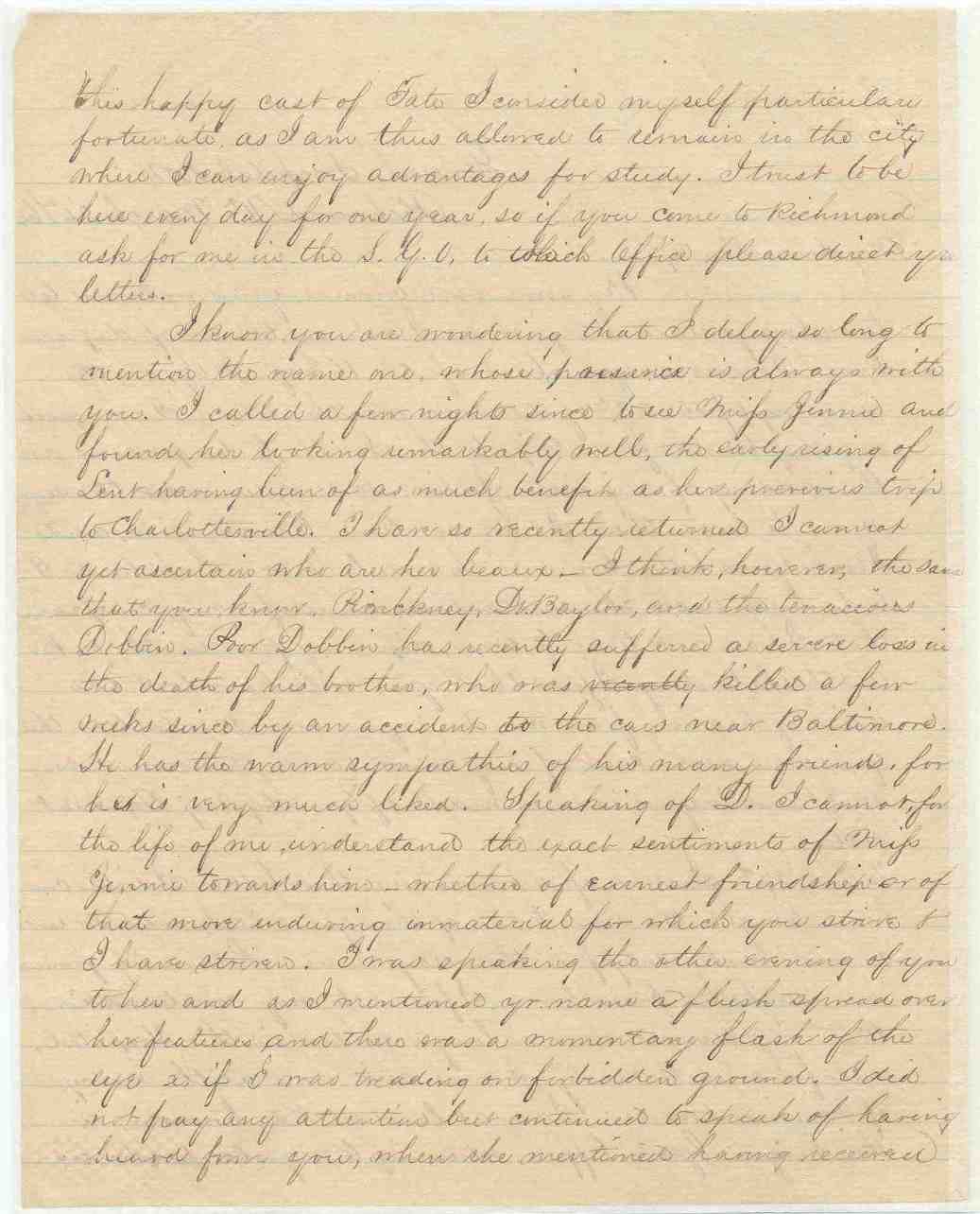 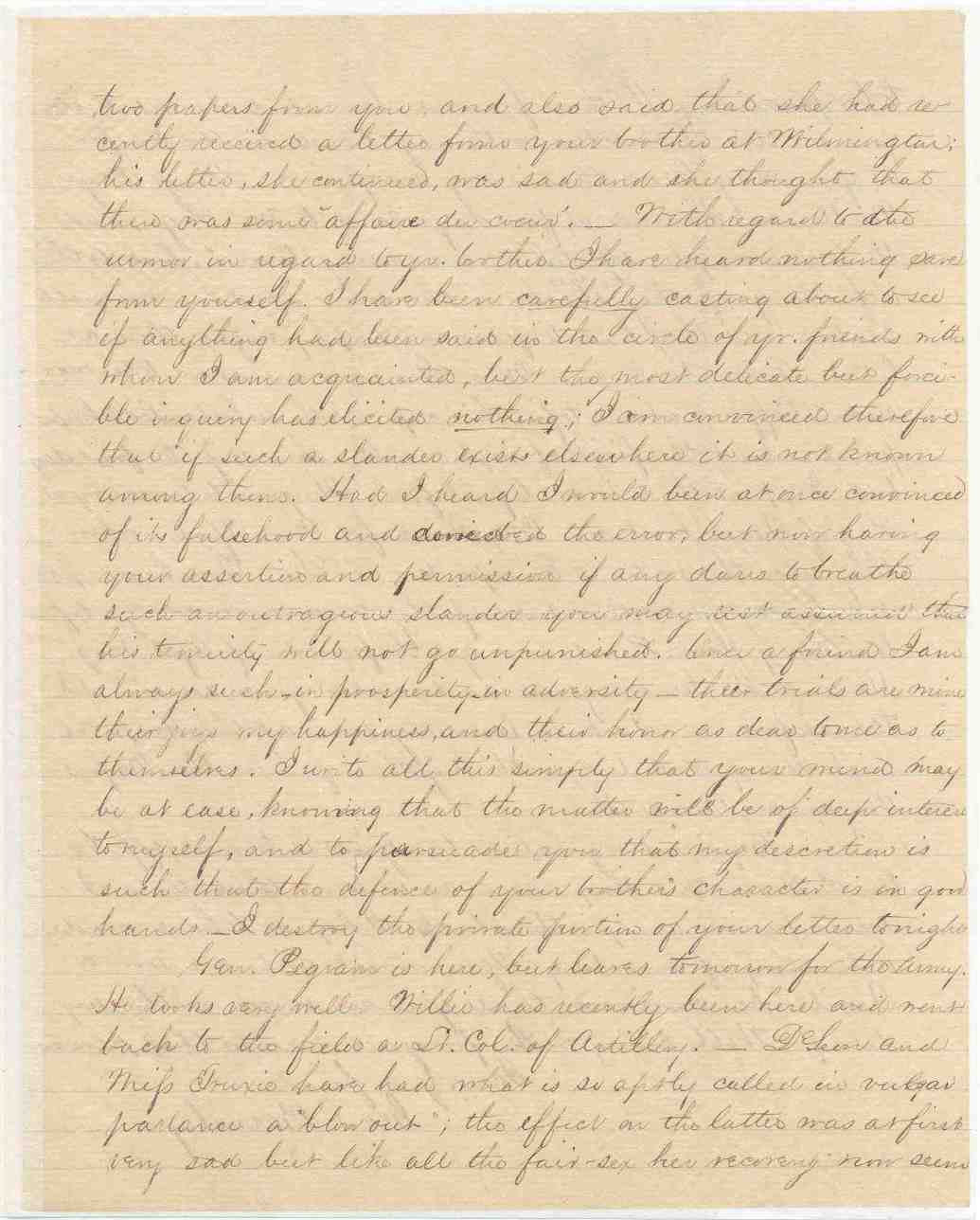 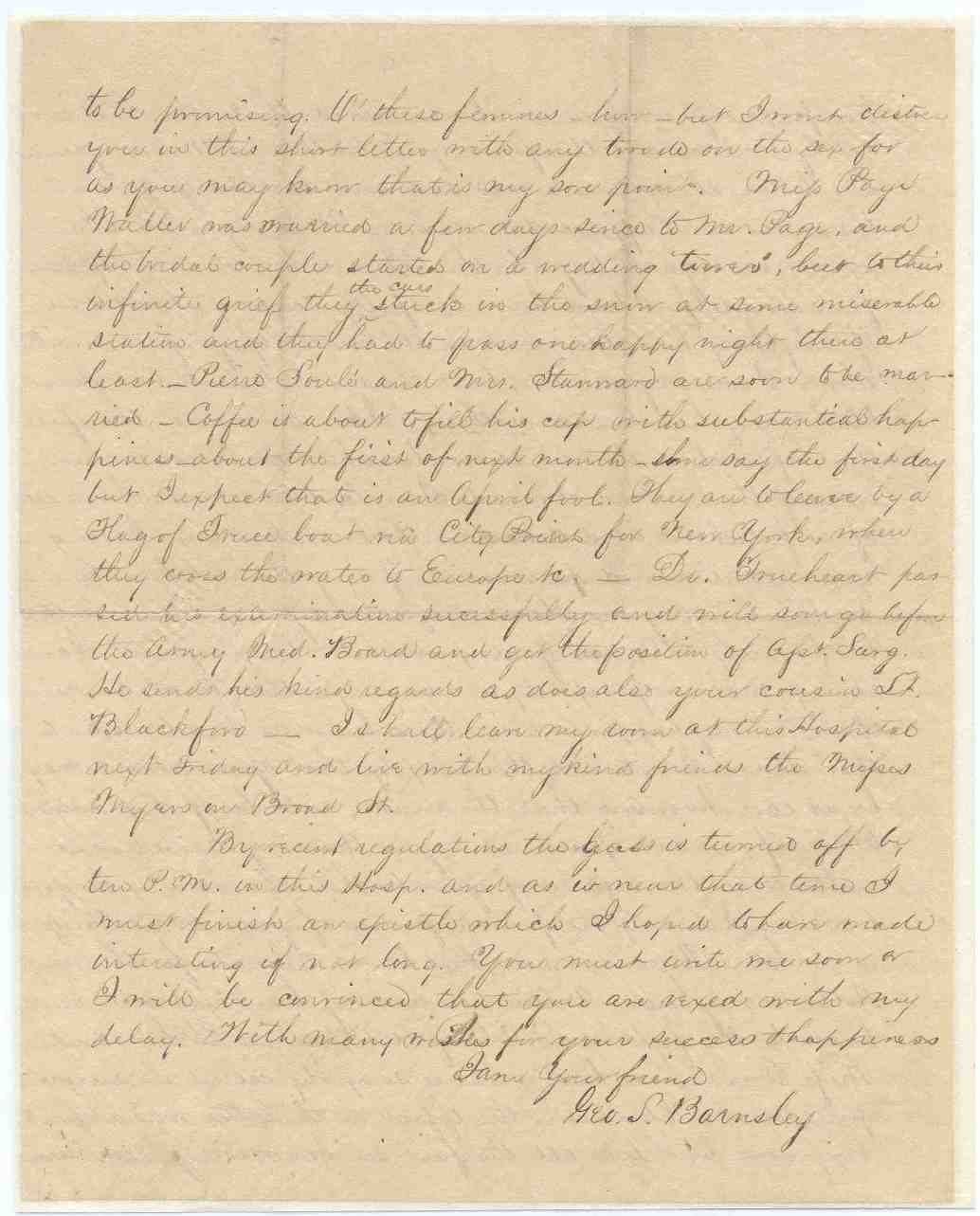 By some evil chance your welcome let-ters always reach me just as I am on the eve of depar-ture.  I received your last of the 16th of Feby. on the morning of the 23rd of the same month, when I was packing my trunk for a trip to the South, to be present at the wedding of my sister, Julia; so sudden was the sum-mons to leave that I had not time to write you, and I took your letter home with me, but so much had I to do and such the constant demand for my company that I had not time to even dip my pen in the ink.  At this late day I fear that you will have lost the relish of hearing from me, but you must recollect that you were never out of my mind (and this reminds me, kind inquiries were made of you by my Father and sister).

March 27th Instead of recommencing this letter I will con-tinue tonight the same train of thought which was so un-ceremoniously snapped three days since.  Returning from my delightful visit home.  I found to my consternation that my services were no longer needed in this Hospital, and for a week nearly I was as it were at the mercy of the wind & waves; I am at last settled, however, in the Surgeon Genls Office, returning to my old posts in this happy cast of Fate. I consider myself particularly fortunate, as I am thus allowed to remain in the city where I can enjoy advantages for study.  I trust to be here everyday for one year, so if you come to Richmond ask for me in the S. G. O., to which office please direct your letters.

I know you are wondering that I delay so long to mention the name one whose presence is always with you. I called a few nights since to see Miss Jennie and found her looking remarkably well, the early rising of Lent having been of as much benefit as her previous trip to Charlottesville.  I have so recently returned I cannot yet ascertain who are her beaux – I think, however, the same that you know.  Rinckney, Dr. Baylor, and the tenacious Dobbin.  Poor dobbin has recently suffered a severe loss in the death of his brother, who was killed a few weeks since by an accident to the cars near Baltimore.  He has the warm sympathies of his many friends, for he is very much liked. Speaking of D., I cannot for the life of me understand the exact sentiments of Miss Jennie towards him – whether of earnest friendship or of that more enduring immaterial for which you strive and I have striven.  I was speaking the other evening of you to her and as I mentioned yr name a flush spread over her and there was a momentary flash of the eye as if I was treading on forbidden ground.  I did not pay any attention but continued to speak of having heard form you, when she mentioned having received two papers from you, and also said that she had re-cently received a letter from your brother at Wilmington; his letter, she continued, was sad and she thought that there was some ‘affaire de coeur.’ With regard to the rumor in regard to your brother I have heard nothing save from yourself.  I have been carefully casting about to see if anything had been said in the circle of your friends with whom I am acquainted, but the most delicate but forci-ble inquiry has elicited nothing; I am convinced thereforethat is such a slander exists elsewhere it is not known among them.  Had I heard I would been at once convinced of its falsehood and corrected the error, but now having your assertions and permission if any dares to breathe such an outrageous slander you may rest assured that his temerity will not go unpunished. [?] a friend I am always such, in prosperity, in adversity, their trials are mine, their joys my happiness, and their honor as dear to me as to themselves.  I write all this simply that you mind may be at ease, knowing that the matter will be of deep interest to myself, ans to persuade you that my discretion is such that the defense of your brother’s character is in good hands.  I destroy the private portion of your letter tonight.

Gen. Pegram is here, but leaves tomorrow for the army. He looks very well. Willie has recently been here and went back to the field as Lt. Col. of Artillery. [DeLean?] and Miss [Truxie?] have had what is so aptly called in vulgar parlance a “blow out”; he effect on the latter was at first very sad but like all the fair sex her recovery now seems to be promising. O! these femines how, but I won’t distress you in this short letter with any tirade on the sex as you may know that is my sore point.  Miss Page Walter was married a few days since to Mr. Page, and this bridal couple started on a wedding [tour?], but to their infinite grief they the cars stuck in the snow at some miserable station and they had to pass one happy night there at least.  Pierre Soule and Mrs. Stunnard are soon to be mar-ried, Coffee is about to fill his cup with substantial hap-piness,  about the first of next month, some say the first day but I expect that is an April fool.  They are to leave by a Flag of Truce boat [?] City Point for New York, where they cross the water to Europe etc. Dr. Trueheart pas-sed his examinations successfully and will [sourge?] before the Army Med. Board and get the position of Asst. Surg.  He sends his kind regards as does also your Cousin Lt. Blackford.  I shall leave mt room at this Hospital next Friday and live with my kind friends the Misses Myers on Broad St.

By recent regulations the gas is turned off by 2pm in this Hosp., and as it near that time I must finish an epistle which I hoped to have made interested if not long.  You must write me soon or I will be convinced that you are vexed with my delay. With many wishes for your success & happiness

I am your friend