7 April 1864: “It may be a belief entertained and justly founded, but I am persuaded expression would be severely criticised.”

Item Description: In this letter, dated 7 April 1864, William Brown at Richmond wrote to Robert Lewis Dabney regarding edits to the manuscript biography of Thomas Jonathan “Stonewall” Jackson written by Dabney. Brown suggested that Dabney rewrite potentially controversial references to “uncultivated” Baptist and “itinerant” Methodist preachers Jackson would have heard and the comparison of crimes against the Confederacy to the crucifixion of Jesus Christ. 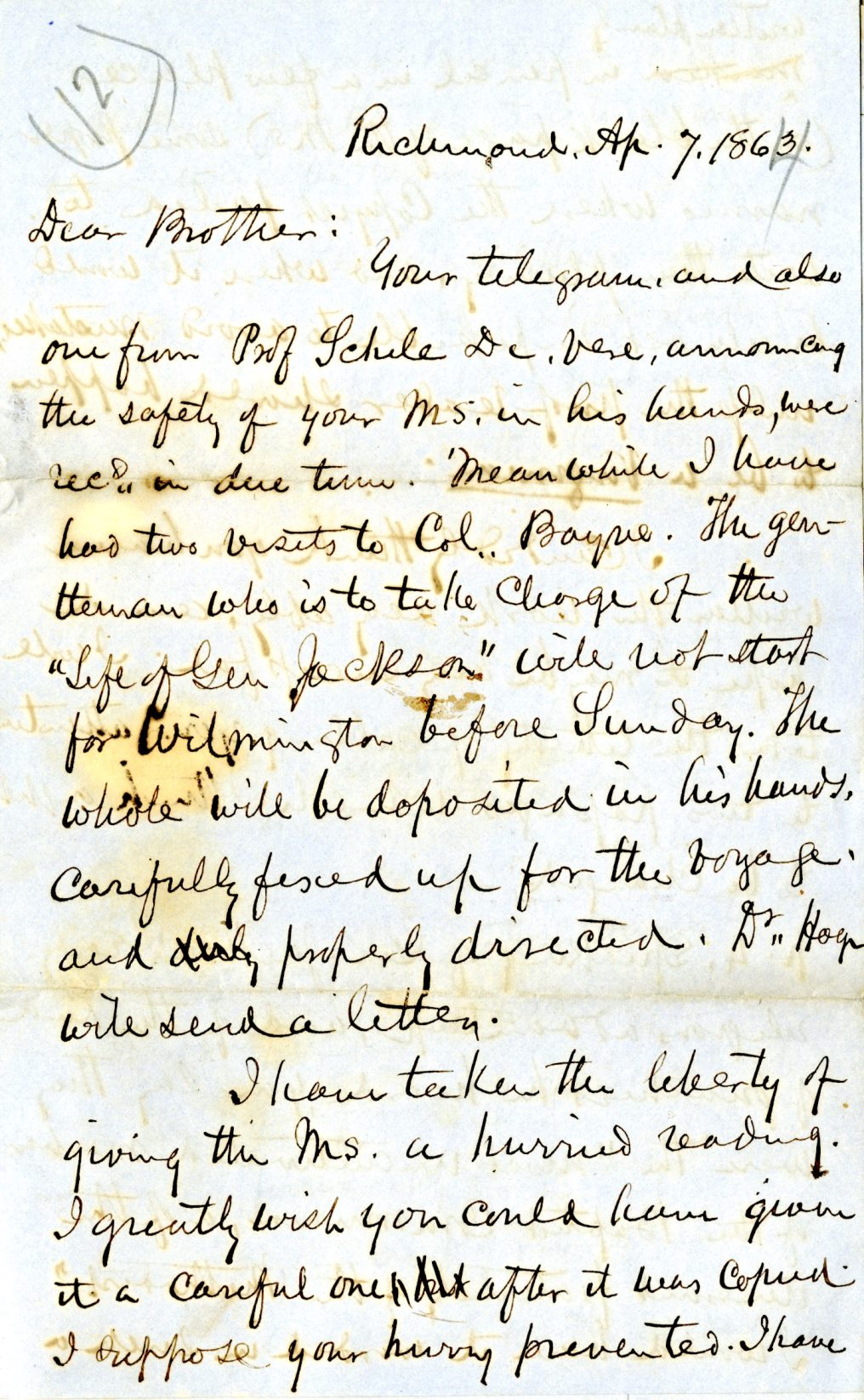 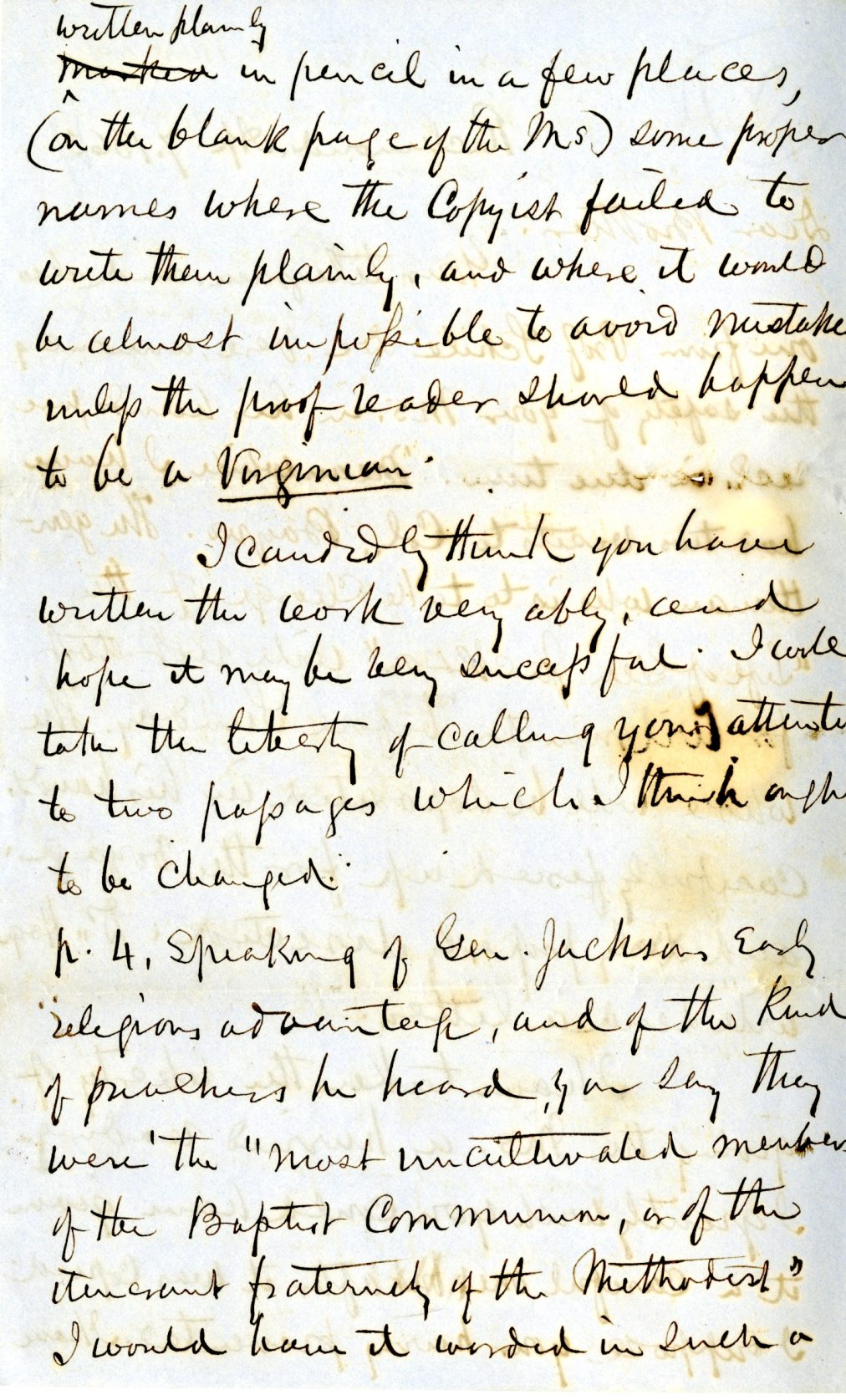 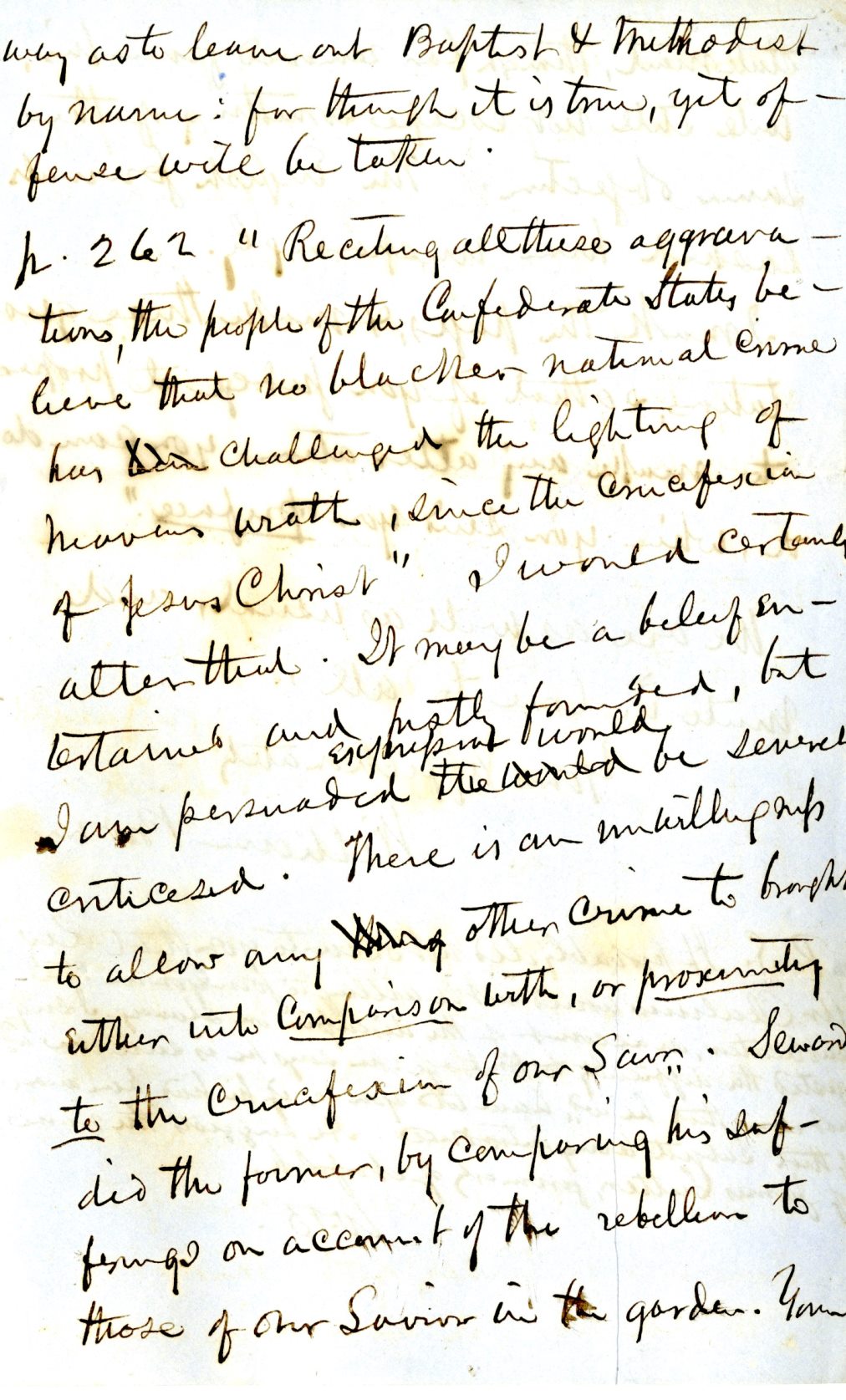 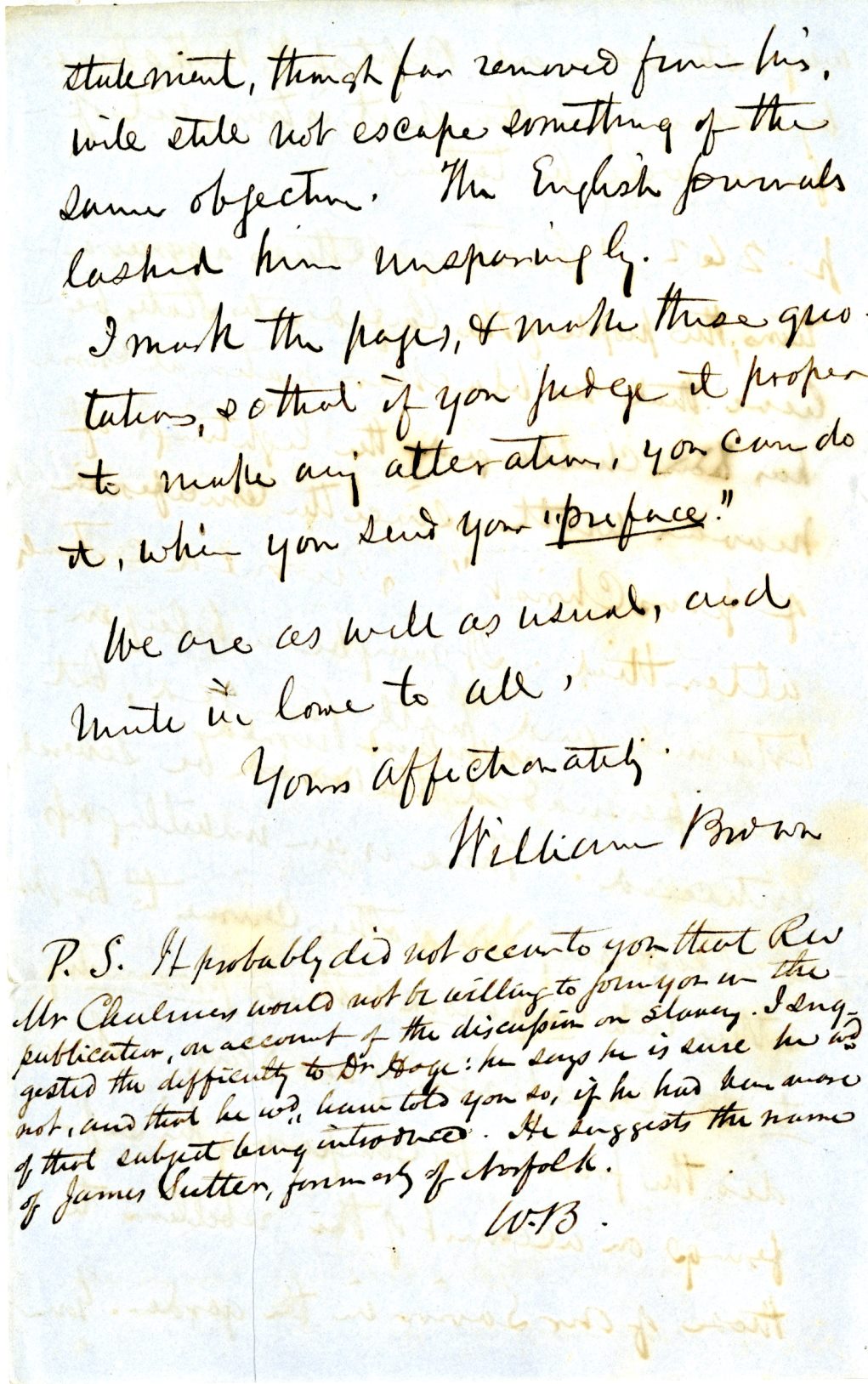 Your telegram, and also one from Prof Schule De. Vere, announcing the safety of your MS. in his hands, were recd in due time. Meanwhile I have had two visits to Col. Bayue. The gentleman who is to take charge of the “life of Gen Jackson” will not start for Wilmington before Sunday. The whole will be deposited in his hands, carefully fixed up for the voyage, and properly directed. Dr Hoge will send a letter.

I have taken the liberty of giving the MS. a hurried reading. I greatly wish you could  have given it a careful one after it was copied. I suppose your hurry prevented. I have written plainly in pencil in a few places, (on the blank page of the MS) some proper names where the Copyist failed to write them plainly, and where it would be almost impossible to avoid mistakes unless the proof reader should happen to be a Virginian.

I candidly think you have written the work very ably, and hope it may be very successful. I will take the liberty of calling your attention to two passages which I think ought to be changed.

p. 4, Speaking of Gen. Jacksons Early religious advantage, and of the kind of preachers he heard, you say they were the “most uncultivated members of the Baptist Communion, or of the itinerant fraternity of the Methodist” I would have it worded in such a way as to leave out Baptist & Methodist by name: for though it is true, yet offense will be taken.

p.262 “Reciting all these aggravations, the people of the Confederate State believe that no blacker natinial crime has challenged the lighting of heavens wrath, since the crucifixion of Jesus Christ” I would certainly alter that. It may be a belief entertained and justly founded, but I am persuaded expression would be severely criticised. There is an unwillingness to allow any other crime to brought either into Comparison with, or proximity to the crucifixion of our Savr. Seward did the former, by comparing his sufferings on account of the rebellion to those of our Savior in the garden. Your statement, though far removed from his, will still not escape something of the same objective. The English journals lashed him unsparingly.

I mark the pages, & make these quotations, so that if you judge it proper to make any alterations, you can do it, when you send your “preface.”

We are as well as usual, and write in love to all.

P.S. It probably did not occur to you that Rev Mr Chalmers would not be willing to join you in the publication, on account of teh discussion on slavery. I suggested the difficulty to Dr Hoge: he says he is sure he wd not, and that he wd have told you so, if he had been aware of that subject being introduced. he suggests the mae of James Sutter, formerly of Sufolk.