19 May 1864: “Today so far everything is quiet the skirmishers don’t even fire at each other but seem to be quite friendly, meet each other and exchange papers and have a talk over the times…”

Posted on 19 May ’14 by Biff Hollingsworth

Item description: This letter, dated 19 May 1864, was written by Confederate soldier Lewis Warlick to his wife. In his letter, Warlick comments on the heavy fighting at Spotsylvania, Virginia. He also notes that friendly contacts were still possible between members of the opposing armies. Warlick would not survive the war. 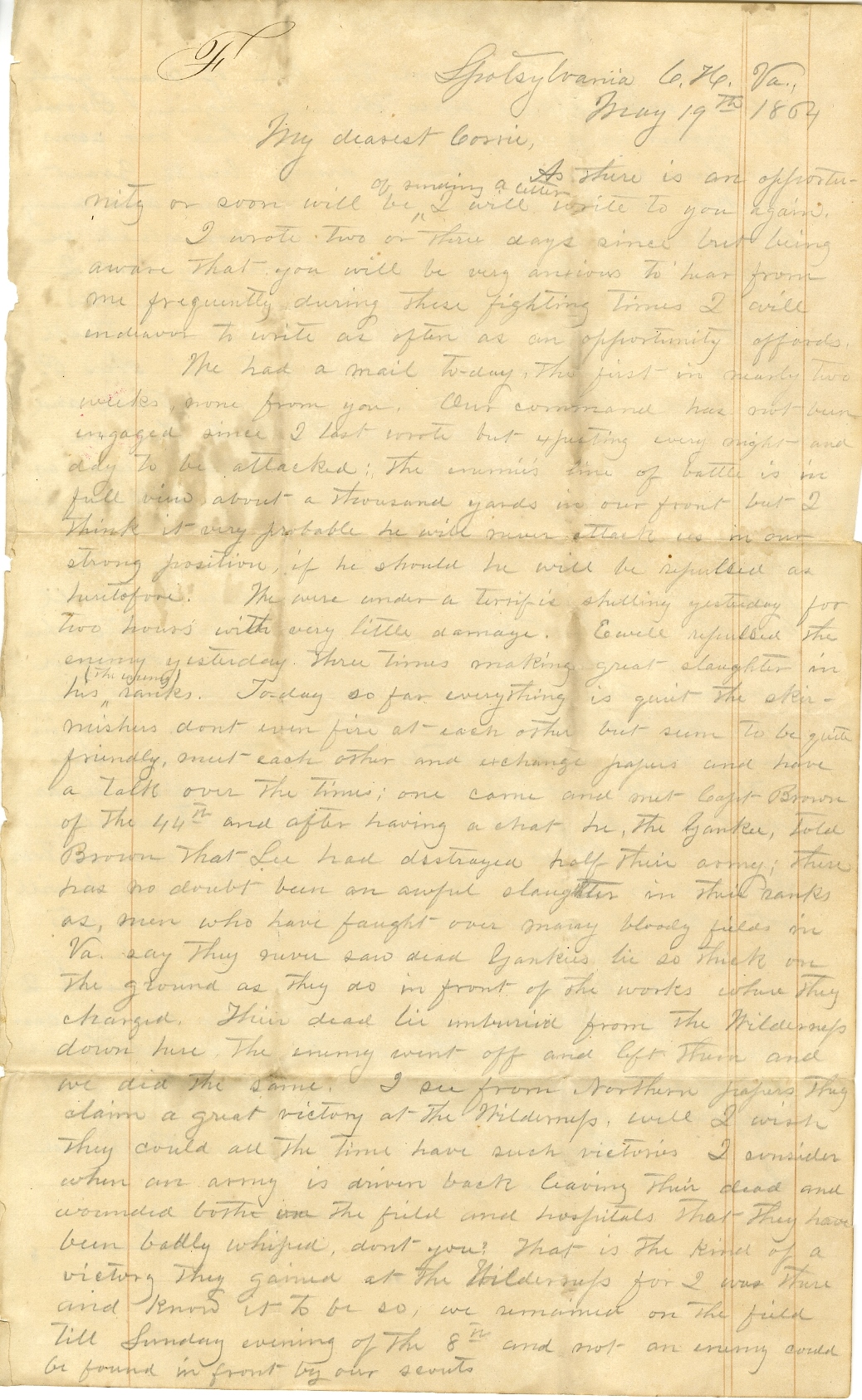 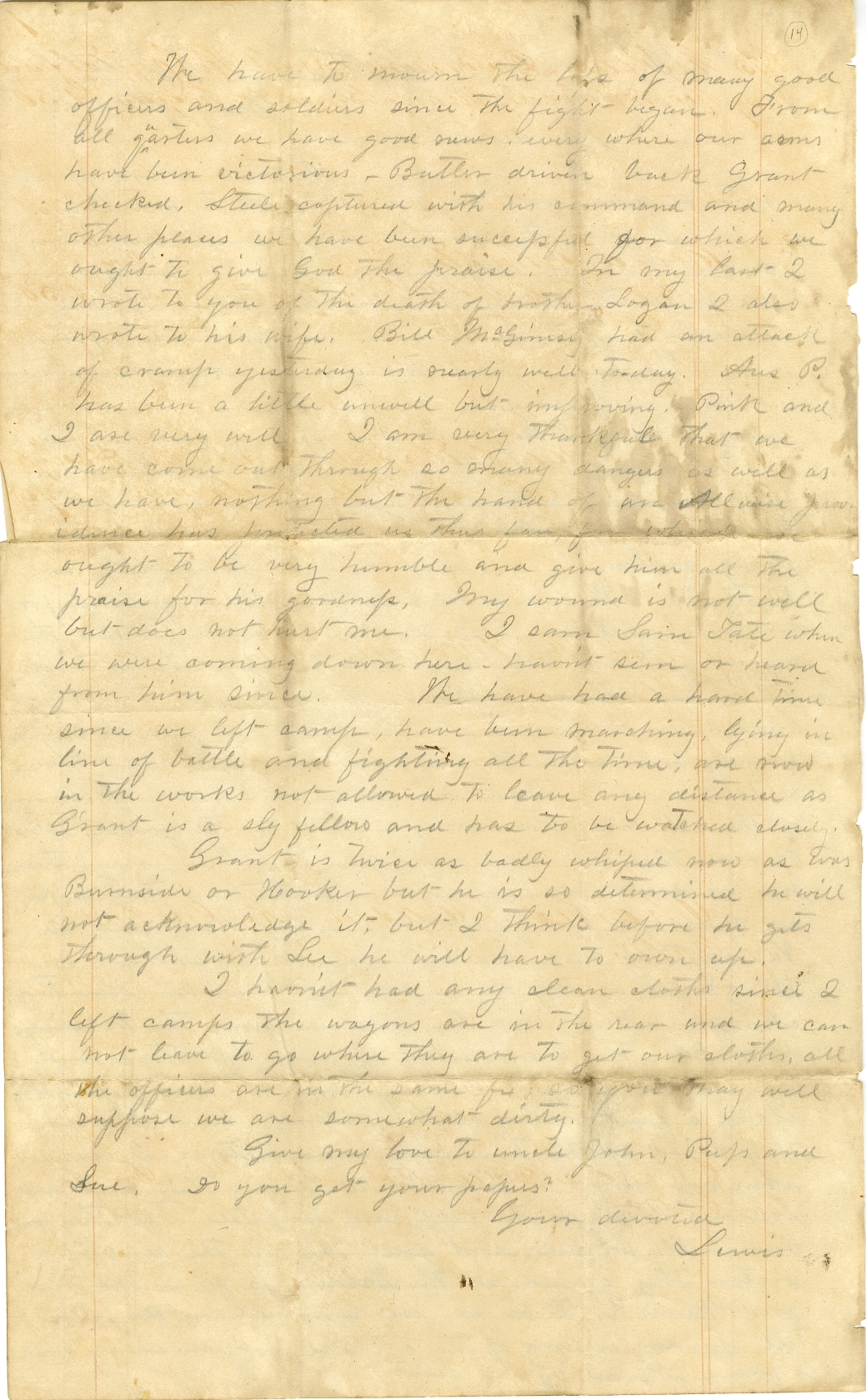 As there is an opportunity or soon will be of sending a letter I will write to you again.

I wrote two or three days since but being aware that you will be very anxious to hear from me frequently during these fighting times I will endeavor to write as often as an opportunity affords.

We had a mail to-day, the first in nearly two weeks, none from you. Our command has not been engaged since I last wrote but expecting every night and day to be attacked: the enemies line of battle is in full view, about a thousand yards in our front but I think it very probable he will never attack us in our strong position, if he should he will be repulsed as heretofore. We were under a terrific shelling yesterday for two hours with very little damage. Ewell repulsed the enemy yesterday three times making great slaughter in his (the enemy) ranks. To-day so far everything is quiet the skirmishers dont even fire at each other but seem to be quite friendly, meet each other and exchange papers and have a talk over the times; one came and met Capt Brown of the 44th and after having a chat he, the Yankee, told Brown that Lee had destroyed half their army; there has no doubt been an awful slaughter in their ranks as, men who have fought over many bloody fields in Va. say they never saw dead Yankees lie so thick on the ground as they do in front of the works where they charged. Their dead lie unburied from the Wilderness down here, the enemy went off and left them and we did the same. I see from Northern papers they claim a great victory at the Wilderness, well I wish they could all the time have such victories I consider when an army is driven back leaving their dead and wounded both in the field and hospitals that they have been badly whiped, dont you? That is the kind of a victory they gained at the Wilderness for I was there and know it to be so, we remained on the field till Sunday evening of the 8th and not an enemy could be found in front by our scouts. We have to mourn the loss of many good officers and soldiers since the fight began. From all quarters we have good news, every where our arms have been victorious– Butler driven back Grant checked, Steele captured with his command and many other places we have been successful for which we ought to give God the praise. In my last I wrote to you of the death of brother Logan I also wrote to his wife. Bill McGimsy had an attack of cramp yesterday is nearly well to-day. Aus P. has been a little unwell but improving. Pink and I are very well. I am very thankful that we have come out through so many dangers as well as we have, nothing but the hand of an Allwise providence has protected us thus far, for which we ought to be very humble and give him all the praise for his goodness. My wound is not well but does not hurt me. I saw Sam Tate when we were coming down here– havn’t seen or heard from him since. We have had a hare time since we left camp, have been marching, lying in line of battle and fighting all the time, are now in the works now allowed to leave any distance as Grant is a sly fellow and has to be watched closely.

Grant is twice as badly whiped now as was Burnside or Hooker but he is so determined he will not acknowledge it, but I think before he gets through with Lee he will have to own up.

I haven’t had any clean cloths since I left camps the wagons are in the rear and we can not leave to go where they are to get our cloths, all the officers are in the same fix, so you may well suppose we are somewhat dirty.

Give my love to uncle John, Puss and Sue. Do you get your papers?