Posted on 11 Dec ’14 by Rebecca Williams

Item Description: Diary entry dated 11 December 1864 by Sarah Lois Wadley. She writes about her various social engagements from the previous weeks. In particular, she recounts a meeting with a Confederate soldier. She also writes about attending at dance and receiving a letter from a dear friend. 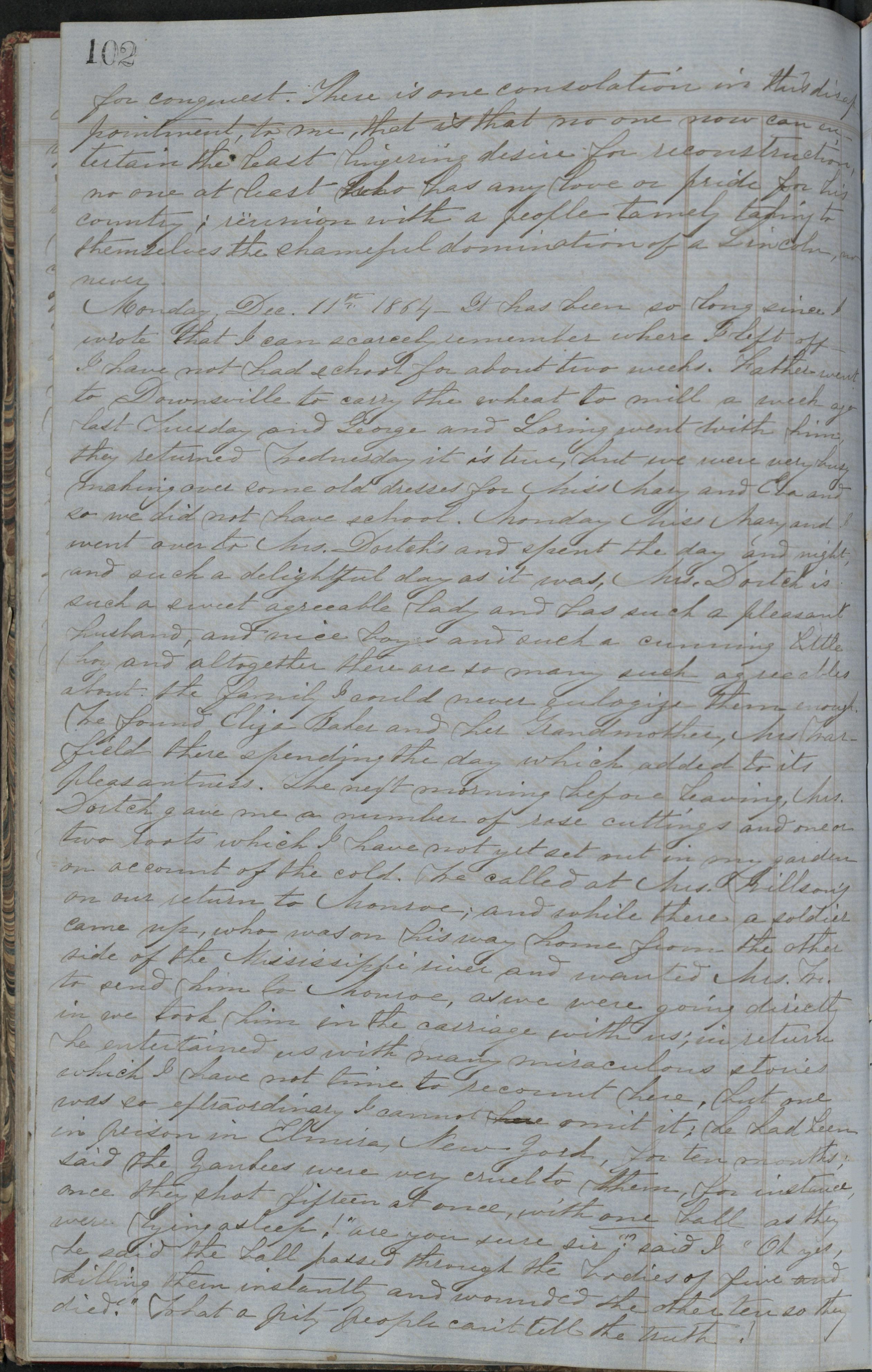 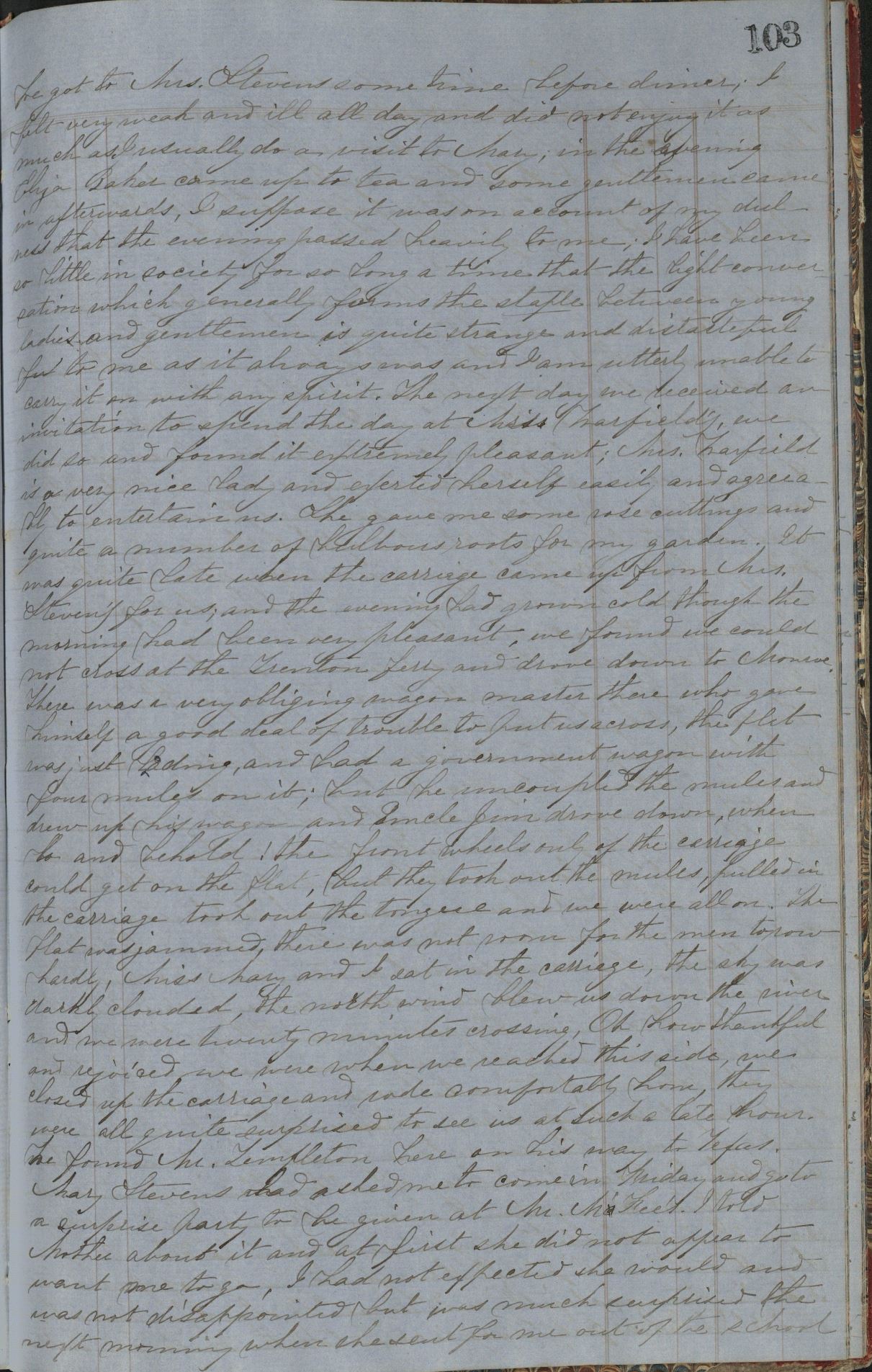 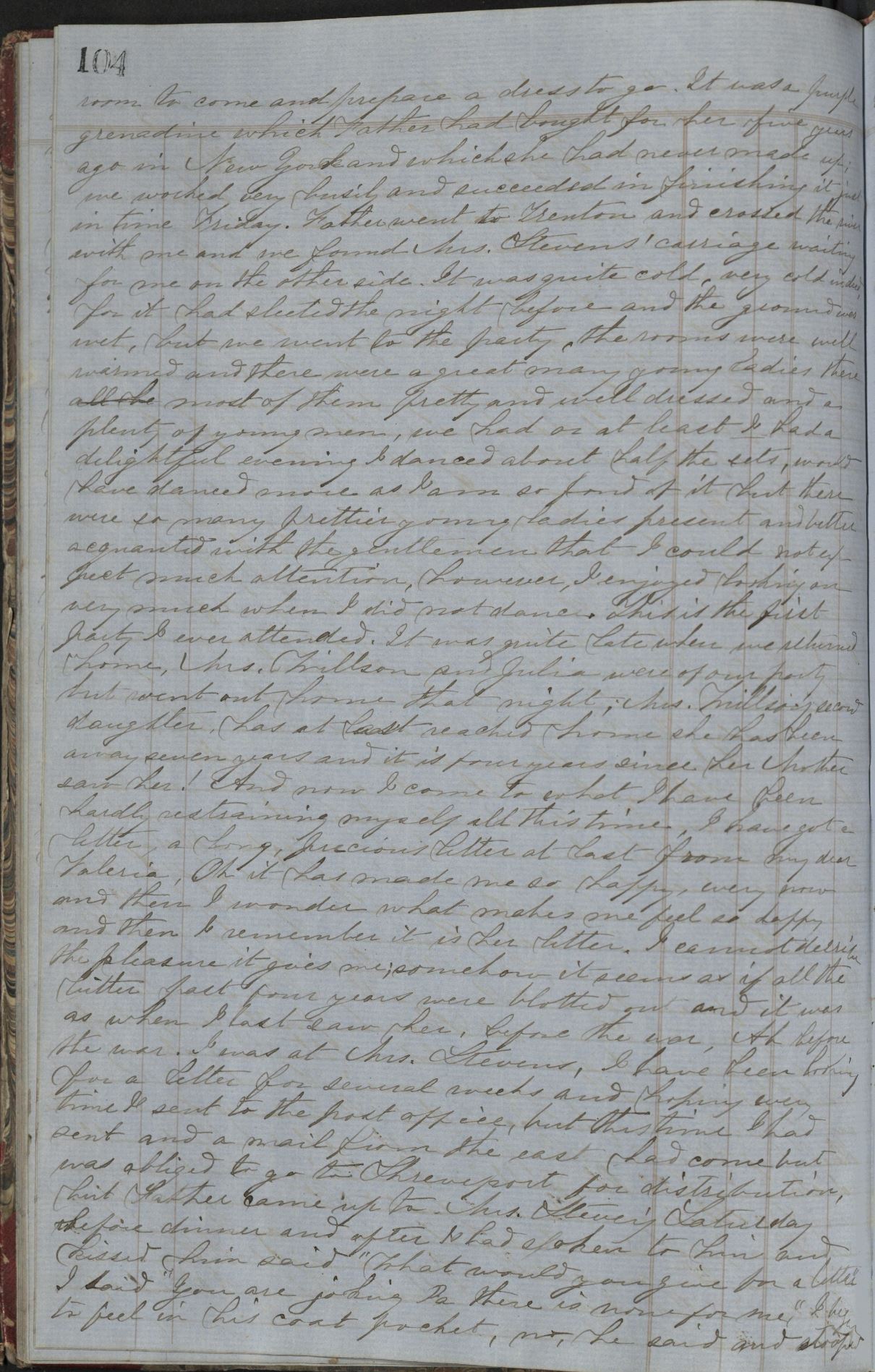 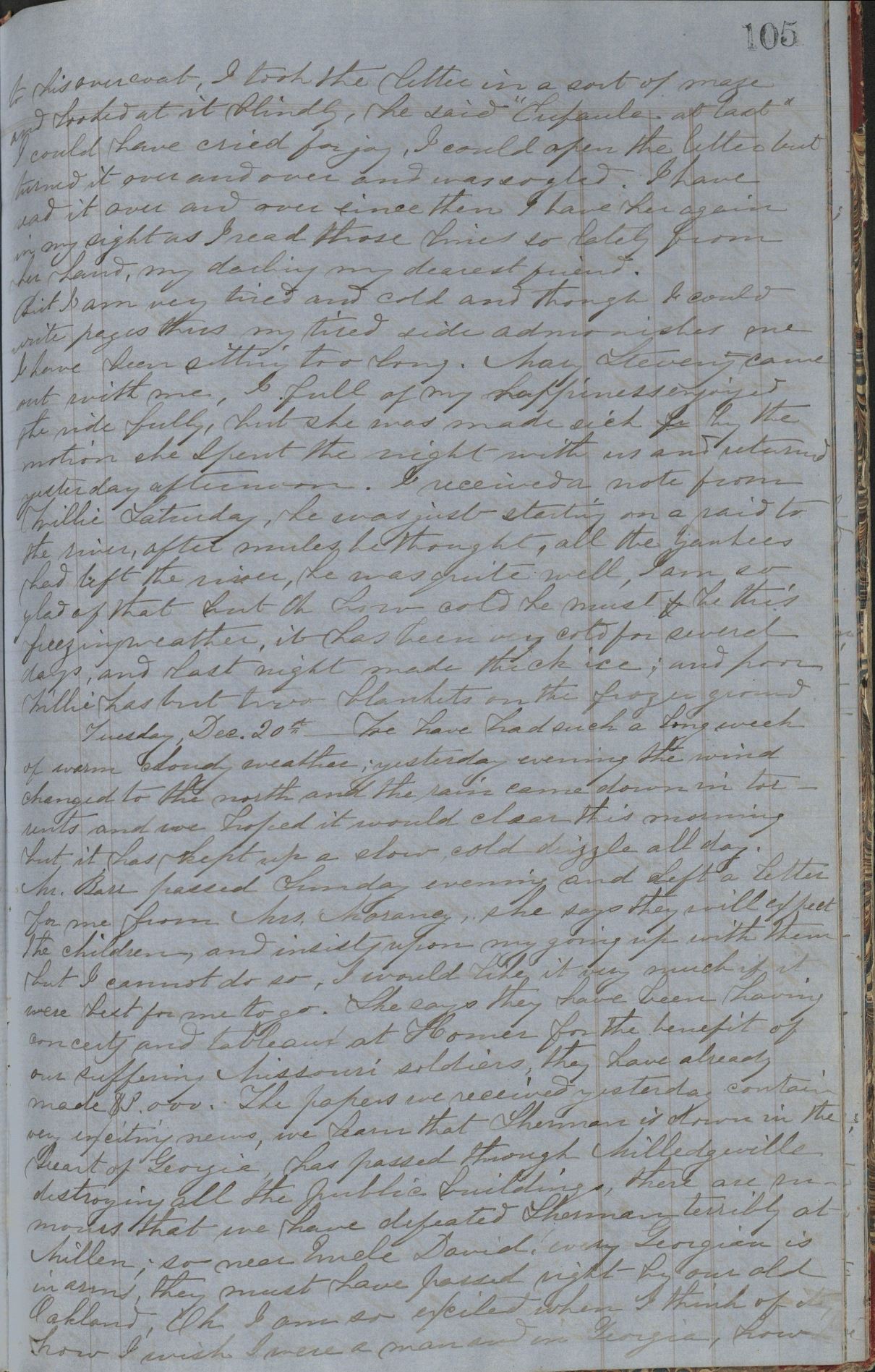 It has been so long since I wrote that I can scarcely remember where I left off. I have not had school for about two weeks. Father went to Downsville to carry the wheat to mill a week ago last Tuesday, and George and Loring went with him, they returned Wednesday it is true, but we were very busy making over some old dresses for Miss Mary and Eva and so we did not have school. Monday Miss Mary and I went over to Mrs. Dortch’s and spent the day and night, and such a delightful day as it was, Mrs. Dortch is such a sweet, agreeable lady and has such a pleasant husband, and nice boys and such a cunning little boy, and altogether there are so many such agreeables about the family, I could never eulogize them enough. We found Eliza Baker and her Grandmother, Mrs. Warfleld, there spending the day, which added to its pleasantness. The next morning before leaving Mrs. Dortch gave as a number of rose cuttings and one or two roots which I have not yet set out in my garden an account of the cold.

We called at Mrs. Willson’s on our return to Monroe, and while there a soldier came up who was on his way home from the other side of the Mississippi river, and wanted Mrs. W. to send him to Monroe, as we were going directly in we took him in the carriage with us; in return he entertained us with many miraculous stories which I have not time to recount here, but one was so extraordinary I cannot omit it. He had been in prison in Elmira, New York, for ten months; said the Yankees were very cruel to them, for instance, once they shot fifteen at once, with one ball, as they were lying asleep! “are you sure, sir?” said I “Oh yes, he said, the ball passed through the bodies of five, killing them instantly, and wounded the other ten so they died.” What a pity people can’t tell the truth!

We got to Mrs. Stevens’ some time before dimmer, I felt very weak and ill all day, and did not enjoy it as much as I usually do a visit to Mary. In the evening Eliza Baker came up to tea, and some gentlemen came in afterwards. I suppose it was on account of my dullness that the evening passed heavily to me; I have been so little in society for so long a time that the light conversation which generally forms the staple between young ladies and gentlemen is quite strange and distasteful to me, as it always was, and I am utterly unable to carry it on with any spirit.

The next day we received an invitation to spend the day at Miss Warfield’s, we did so and found it extremely pleasant; Mrs. Warfield is a very nice lady and exerted herself easily and agreeably to entertain us. She gave me some rose cuttings and quite a number of bulbous roots for my garden. It was quite late when the carriage came up from Mrs. Stevens’ for us, and the evening had grown cold though the morning had been very pleasant. We found we could not cross at the Trenton ferry and drove down to Monroe. There was a very obliging wagon master there, who gave himself a good deal of trouble to put us across, the flat was just loading, and had a government wagon with four mules on it; but he uncoupled the mules and drew up his wagon, and Uncle Jim drove down, when lo and behold! the front wheels only of the carriage could get on the flat, but they took out the mules, pulled in the carriage, took out the tongue, and we were all on. The flat was jammed, there was not room for the men to row hardly, Miss Mary and I sat in the carriage, the sky was darkly clouded, the north wind blew us down the river and we were twenty minutes crossing. Oh, how thankful and rejoiced we were when we reached this side, we closed up the carriage and rode comfortably home, they were all quite surprised to see us at such a late hour. We found Mr. Templeton here on his way to Texas. Mary Stevens had asked me to come in Friday and go to a surprise party to be given at Mr. M’Fee’s. I told Mother about it, and at first she did not appear to want me to go, I had not expected she would and was not disappointed, but was much surprised the next morning when she sent for me out of the school room to come and prepare a dress to go. It was a purple grenadine which Father had bought for her five years ago in New York, and which she had never made up; we worked very busily, and succeeded in finishing it just in time Friday. Father went to Trenton and crossed the river with me, and we found Mrs. Stevens’ carriage waiting for me on the other side. It was quite cold, very cold indeed, for it had sleeted the night before and the ground was wet, but we went to the party. The rooms were well warmed, and there were a great many young ladies there, most of them pretty and well dressed, and a plenty of young men. We had, or at least I had, a delightful evening, I danced about half the sets, would have danced more as I am so fond of it but there were so many prettier young ladies present, and better acquainted with the gentlemen, that I could not expect much attention, however, I enjoyed looking on very much when I did not dance. This is the first party I ever attended. It was quite late when we returned home, Mrs. Willson and Julia were of our party but went out home that night. Mrs. Willson’s second daughter has at last reached home, she has been away seven years, and it is four years since her Mother saw her! And now I come to what I have been hardly restraining myself all this time, I have got a letter, a long, precious letter at last from my dear Valeria. Oh, it has made me so happy, every now and then I wonder what makes me feel so happy and then I remember it in her letter. I cannot describe the pleasure it gives me; somehow it seems as if all the bitter past four years were blotted out, and it was as when I last saw her, before the war. Ah, before the war. I was at Mrs. Stevens’, I have been looking for a letter for several weeks and hoping every time I sent to the post office, but this time I had sent and a mail from the east had come, but was obliged to go to Shreveport for distribution, but Father came up to Mrs. Stevens’ Saturday before dinner and after I had spoken to him and kissed him said “What would you give for a letter” I said “You are joking Pa, there is none for me.” I began to feel in his coat pocket, no, he said, and stooped to his overcoat. I took the letter in a sort of maze and looked at it blindly, he said “Eufaula at last.” I could have cried for joy, I could open the letter but turned it over and over and was so glad. I have read it over and over since then, I have her again in my sight as I read those lines so lately from her hand, my darling, my dearest friend.

But I am very tired and cold, and though I could write pages thus, my tired side admonishes me I have been sitting too long. Mary Stevens came out with me, I full of my happiness enjoyed the ride fully, but she was made sick by the motion, she spent the night with us, and returned yesterday afternoon.

I received a note from Willie Saturday, he was just starting on a raid to the river, after mules he thought, all the Yankees had left the river. He was quite well, I am so glad of that, but Oh how cold he must be this freezing weather, it has been very cold for several days, and last night made thick ice; and poor Willie has but two blankets an the frozen ground.