Posted on 17 Feb ’15 by Rebecca Williams

Item Description: Entry, dated 17 February 1865, from the diary of Emma Florence LeConte, the daughter of scientist Joseph LeConte of Columbia, S.C. She writes about the capture of the city of Columbia. 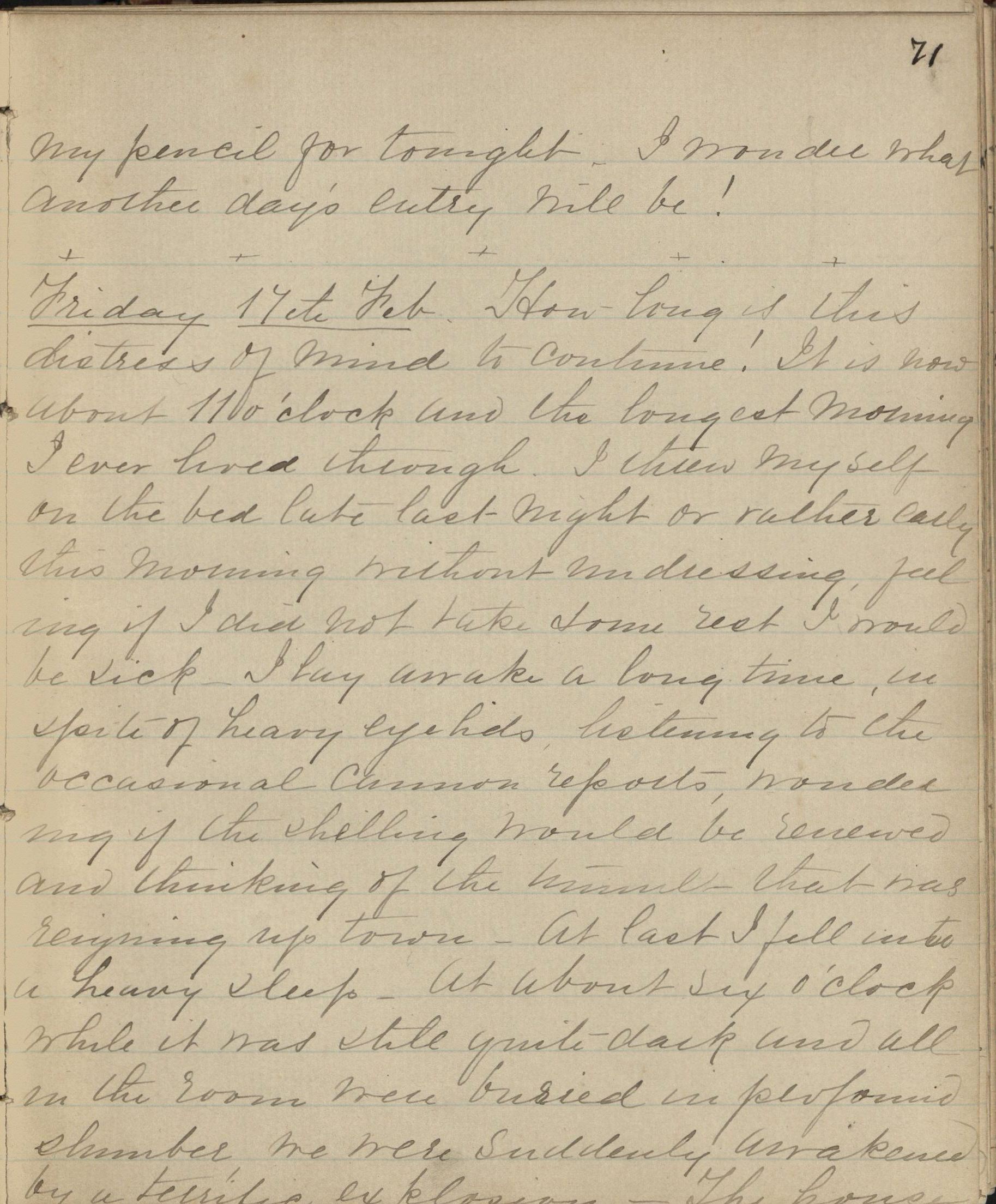 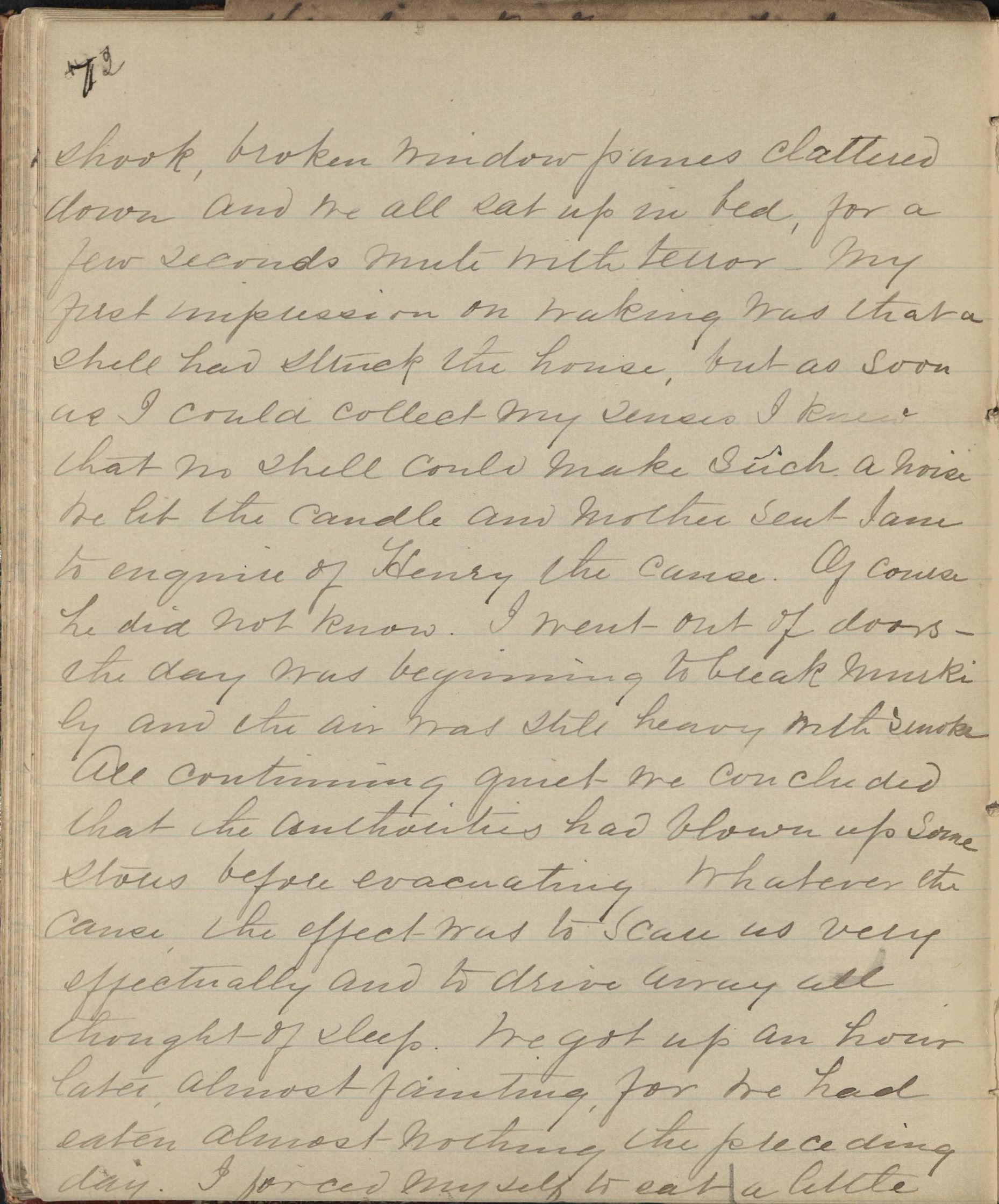 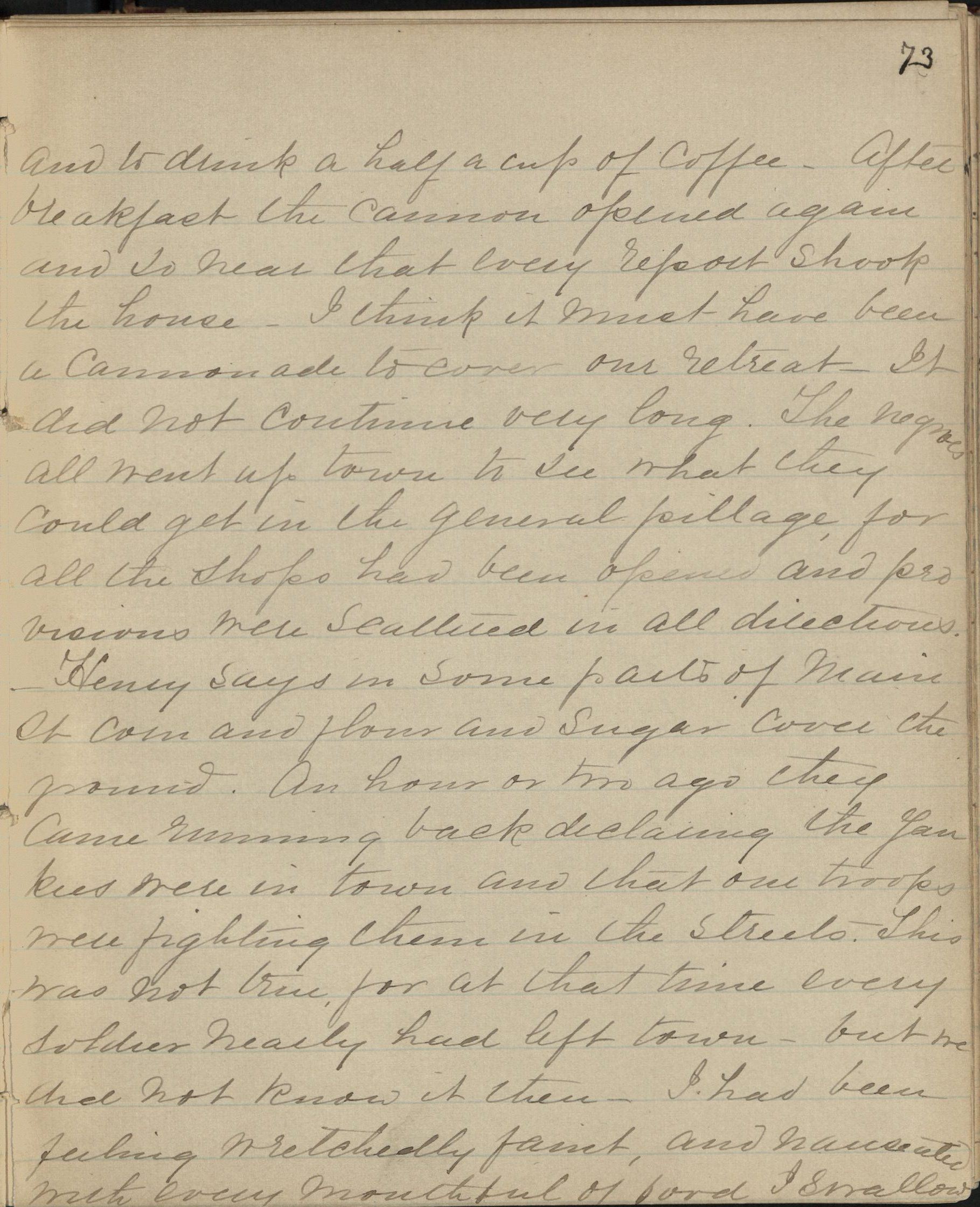 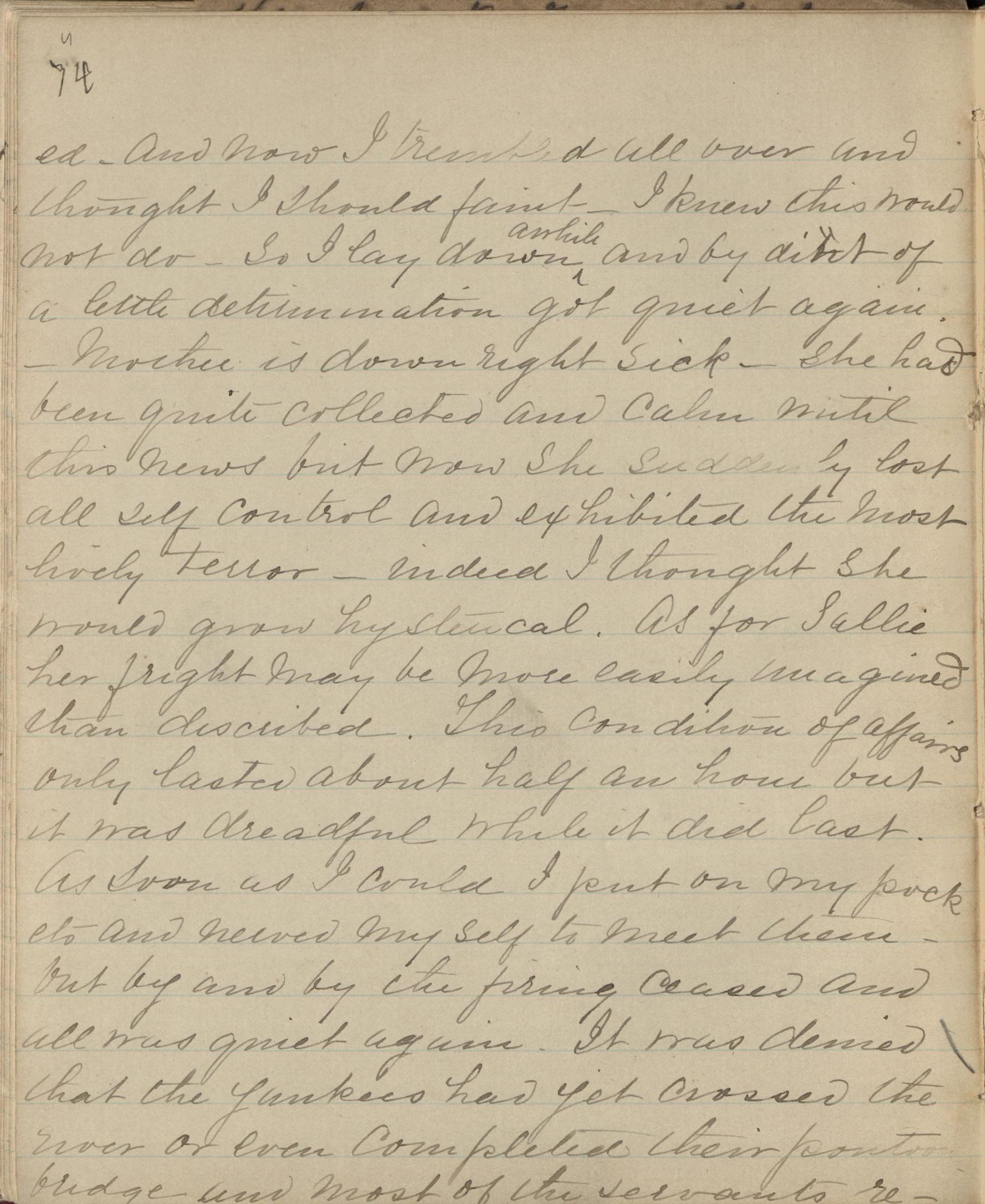 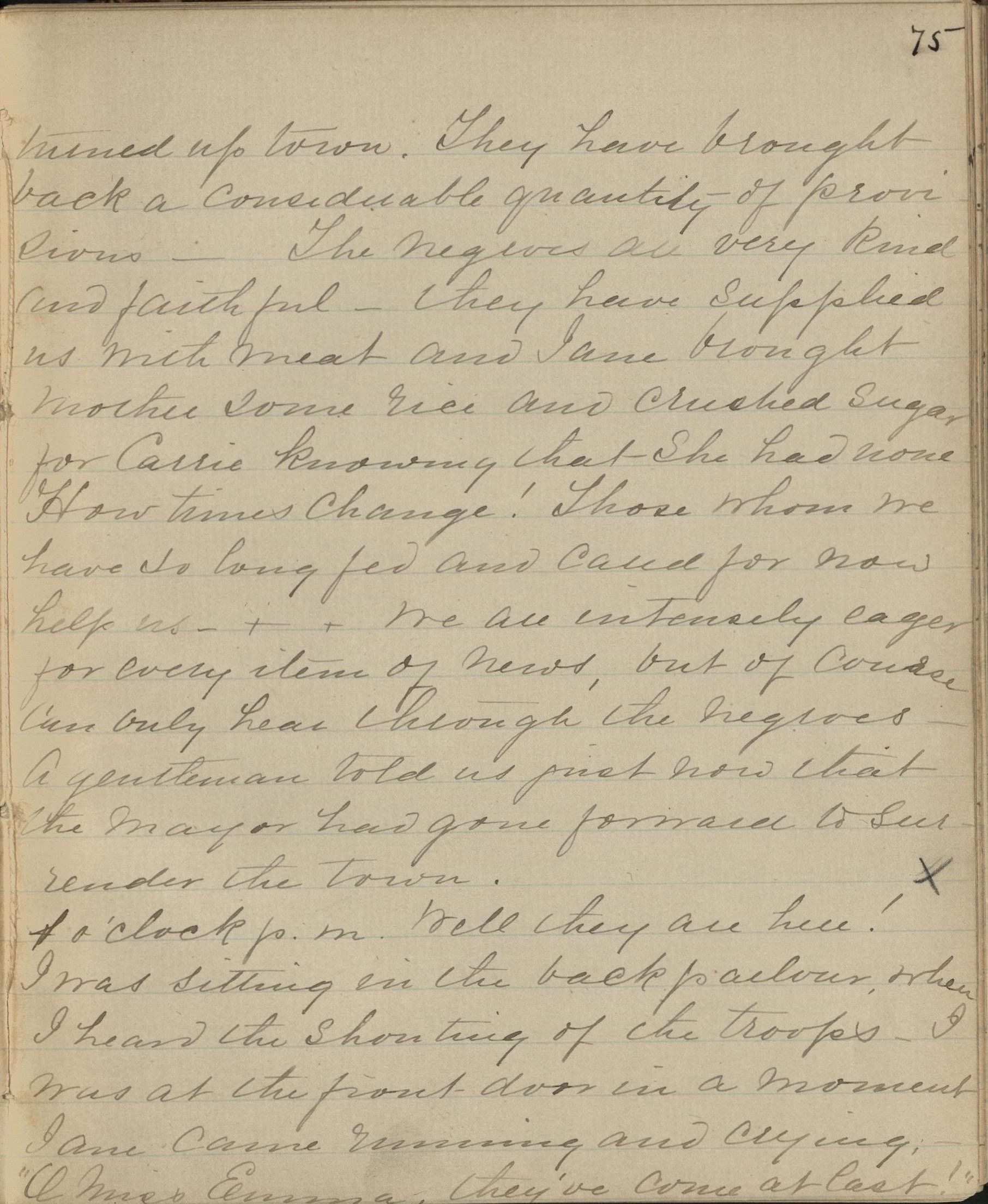 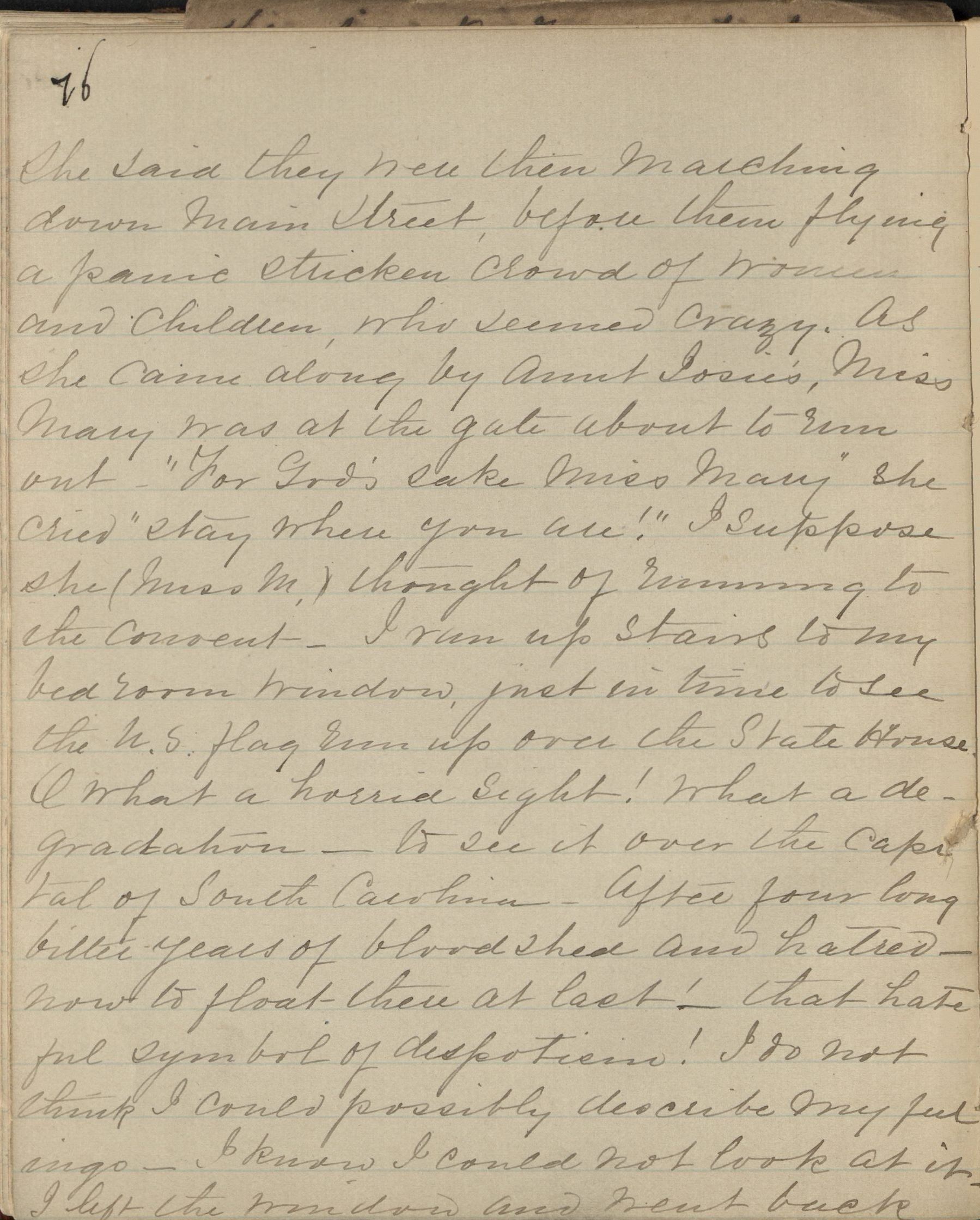 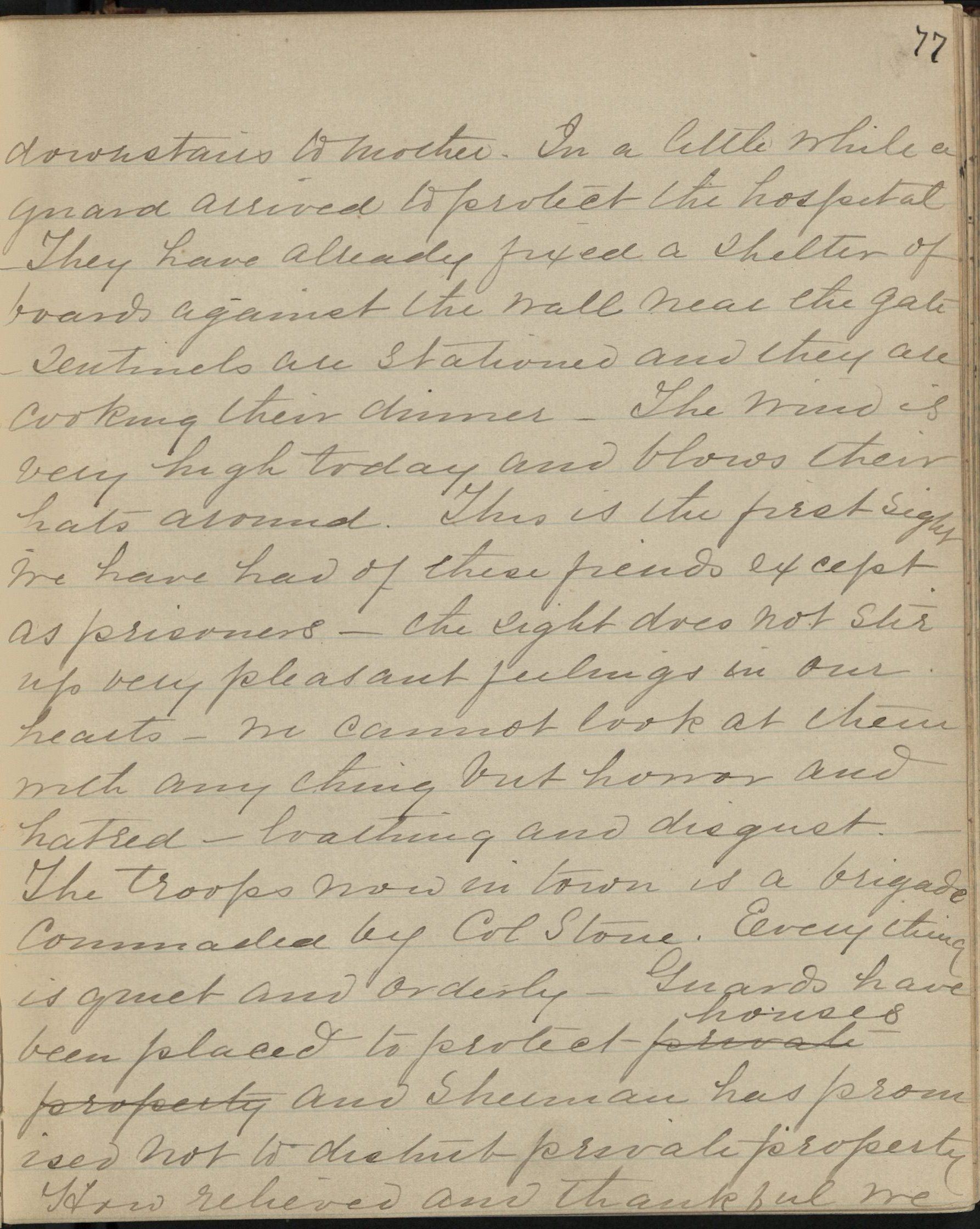 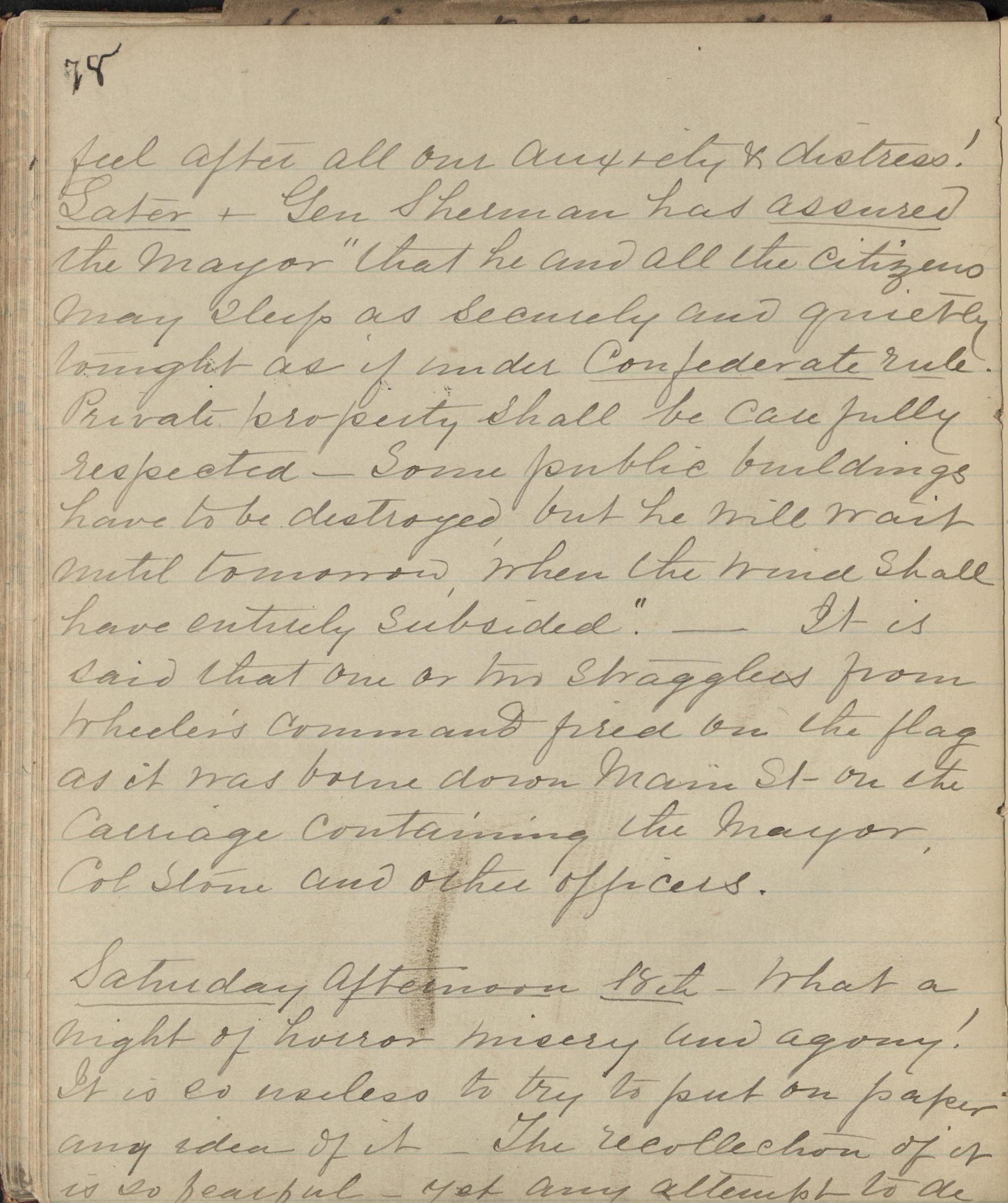 Friday, 17th Feb.
How long is this distress of mind to continue! It is now about eleven o’clock, and the longest morning I ever lived through. I threw myself on the bed late last night, or rather early this morning, without undressing, feeling if I did not take some rest I would be sick. I lay awake a long time in spite of heavy eyelids, listening to the occasional cannon reports, wondering if the shelling would be renewed and thinking of the tumult there was reigning uptown. At last I fell into a heavy sleep. At about six o’clock while it was still quite dark and all in the room were buried in profound slumber, we were suddenly awakened by a terrific explosion. The house shook – broken window-panes clattered down, and we all sat up in bed, for a few seconds mute with terror. My first impression on waking was that a shell had struck the house, but as soon as I could collect my senses I know that no shell could make such a noise. We lit the candle, and mother sent Jane to inquire of Henry the cause. Of course he did not know. I went out of doors. The day was beginning to break murkily and the air was still heavy with smoke. All continuing quiet we concluded that the authorities had blown up some stores before evacuating. Whatever the cause, the effect was to scare us very effectively and to drive away all thought of sleep. We got up an hour later, almost fainting for we had eaten almost nothing the preceeding day. I forced myself to eat a little and to drink a half cup of coffee. After breakfast the cannon opened again and so near that every report shook the house. I think it must have been a cannonade to cover our retreat. It did not continue very long. The negroes all went uptown to see what they could get in the general pillage, for all the shops had been opened and provisions were scattered in all directions. Henry says that in some parts of Main Street corn and flour and sugar cover the ground. An hour or two ago they came running back declaring the Yankees were in town and that our troops were fighting them in the streets. This was not true, for at that time every soldier nearly had left town, but we did not know it then. I had been feeling wretchedly faint and nauseated with every mouthful of food I swallowed, and now I trembled all over and thought I should faint. I knew this would not do, so I lay down awhile and by dint of a little determination got quiet again. Mother is downright sick. She had been quite collected and calm until this news, but now she suddenly lost all self-control and exhibited the most lively terror – indeed I thought she would grow hysterical. As for Sallie her fright may be more easily imagined than described. This condition of affairs only lasted about half-an-hour, but it was dreadful while it did last. As soon as I could I put on my pocket and nerved myself to meet them, but by-and-by the firing ceased and all was quiet again. It was denied that the Yankees had yet crossed the river or even completed their pontoon bridge, and most of the servants returned uptown. They have brought back a considerable quantity of provisions – the negroes are very kind and faithful – they have supplied us with meat and Jane brought mother some rice and crushed sugar for Carrie, knowing that she had none. How times change! Those whom we have so long fed and cared for now help us – *** We are intensely eager for every item of news, but of course can only hear through the negroes. A gentleman told us just now that the mayor had gone forward to surrender the town.

One o’clock p.m. – Well, they are here. I was sitting in the back parlor when I heard the shouting of the troops. I was at the front door in a moment. Jane came running and crying – “O Miss Emma, they’ve come at last!” She said they were then marching down Main Street, before them flying a panic-stricken crowd of women and children who seemed crazy. As she came along by Aunt Josie’s Miss Mary was at the gate about to run out – “For God’s sake Miss Mary” she cried “stay where you are”. I suppose she (Miss M.) thought of running to the Convent. I ran upstairs to my bedroom windows just in time to see the U.S. flag run up over the State house. O what a horrid sight! what a degradation! After four long bitter years of bloodshed and hatred, now to float there at last! That hateful symbol of despotism! I do not think I could possibly describe my feelings. I know I could not look at it. I left the window and went back downstairs to mother. In a little while a guard arrived to protect the hospital. They have already fixed a shelter of boards near against the wall near the gate – sentinels are stationed and they are cooking their dinner. The wind is very high today and blows their hats around. This is the first sight we have had of these fiends except as prisoners. The sight does not stir up very pleasant feelings in our hearts. We cannot look at them with anything but horror and hatred – loathing and disgust. The troops now in town is a brigade commanded by Col. Stone. Everything is quiet and orderly. Guards have been placed to protect houses, and Sherman has promised not to disturb private property. How relieved and thankful we feel after all our anxiety and distress! –

Later – Gen. Sherman has assured the Mayor, “that he and all the citizens may sleep securely and quietly tonight as if under Confederate rule. Private property shall be carefully respected. Some public buildings have to be destroyed, but he will wait until tomorrow when the wind shall have entirely subsided”. It is said that one or two stragglers from Wheeler’s command fired on the flag as it was borne down Main Street on the carriage containing the Mayor, Col. Stone and officers.