Posted on 21 Apr ’15 by Rebecca Williams

Item Description: Diary entry dated 21 April by Emma LeConte. LeConte lived in Columbia, South Carolina and was the daughter of the scientist Joseph LeConte. She reacts to the news that Abraham Lincoln has been assassinated. 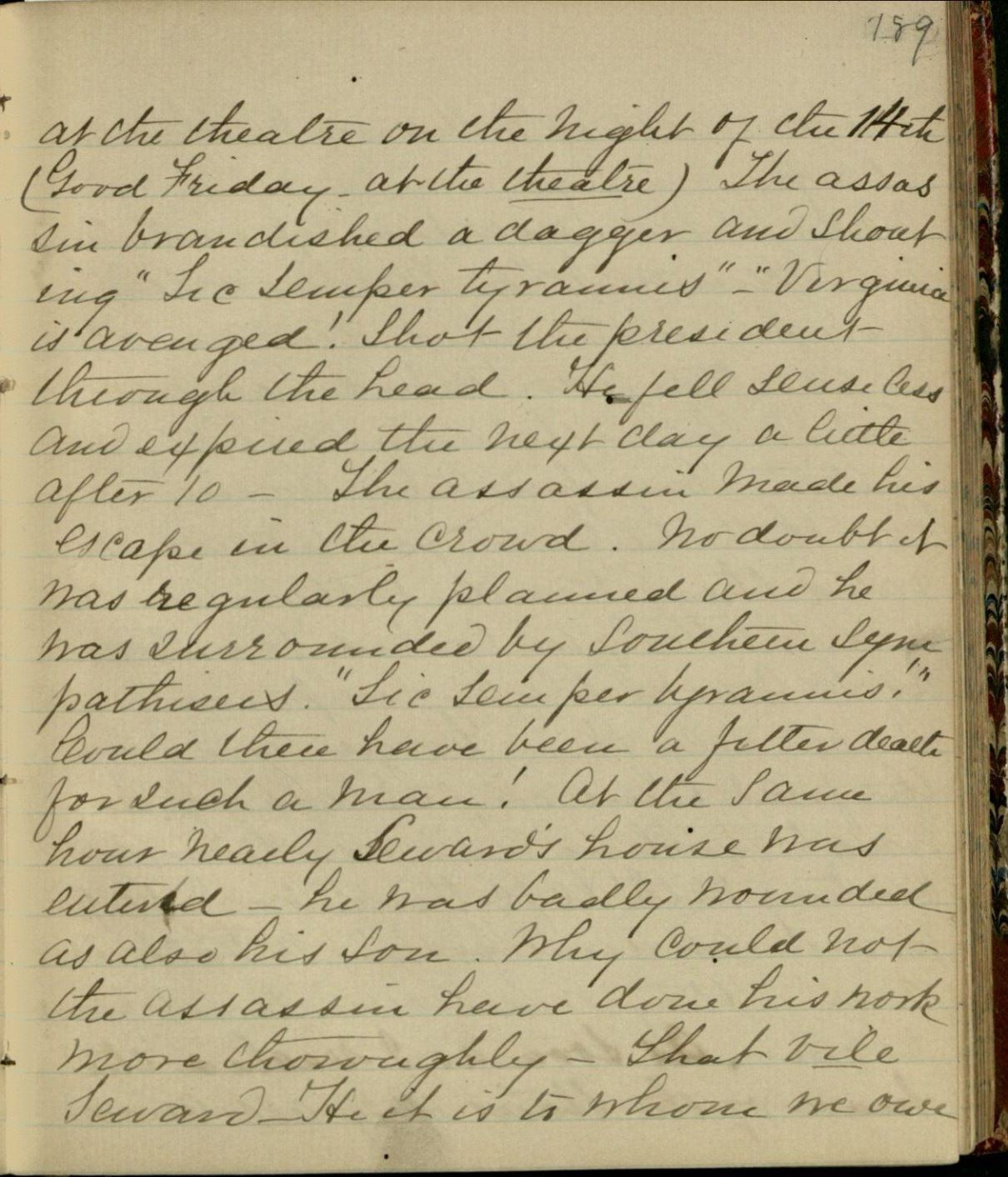 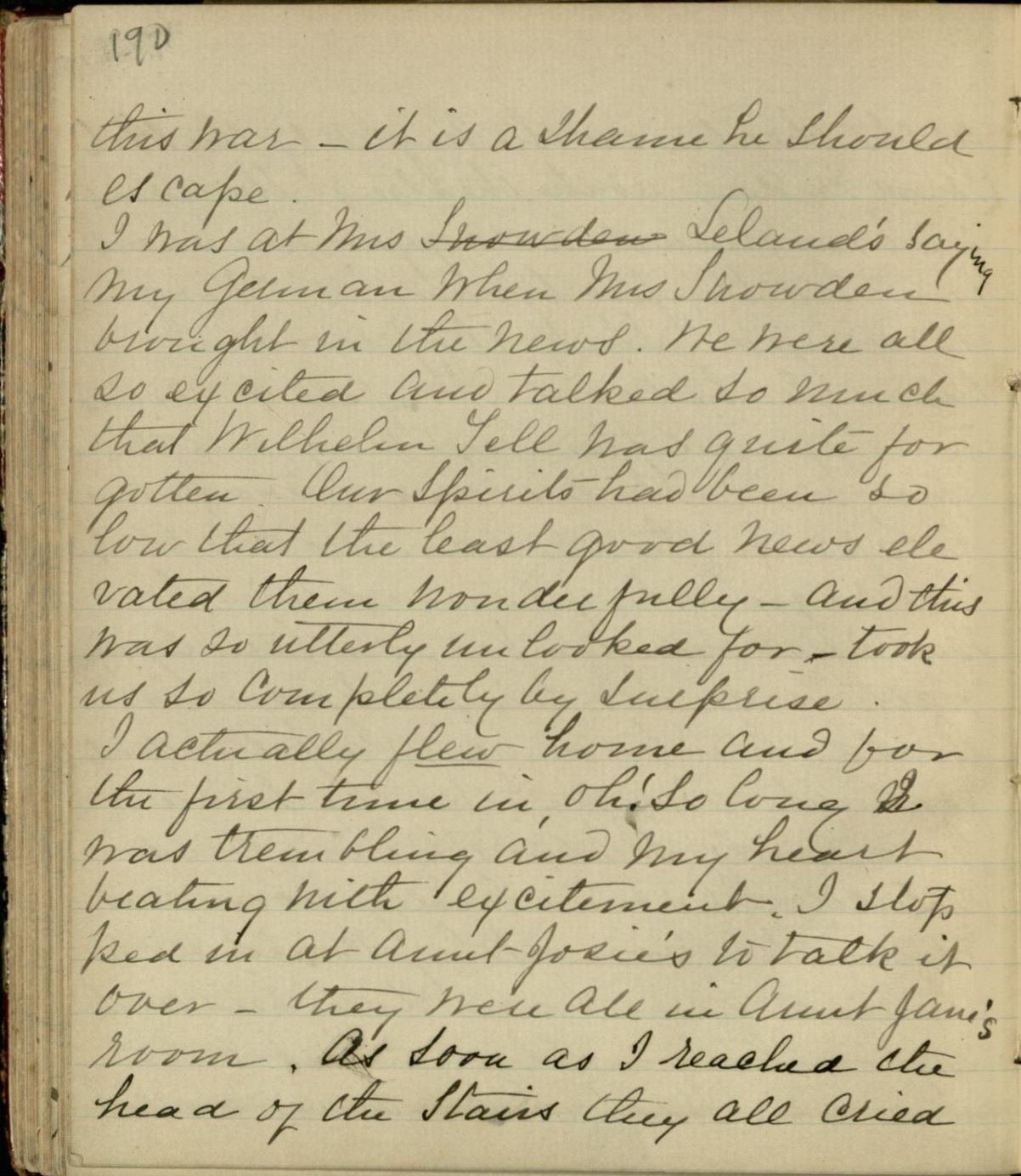 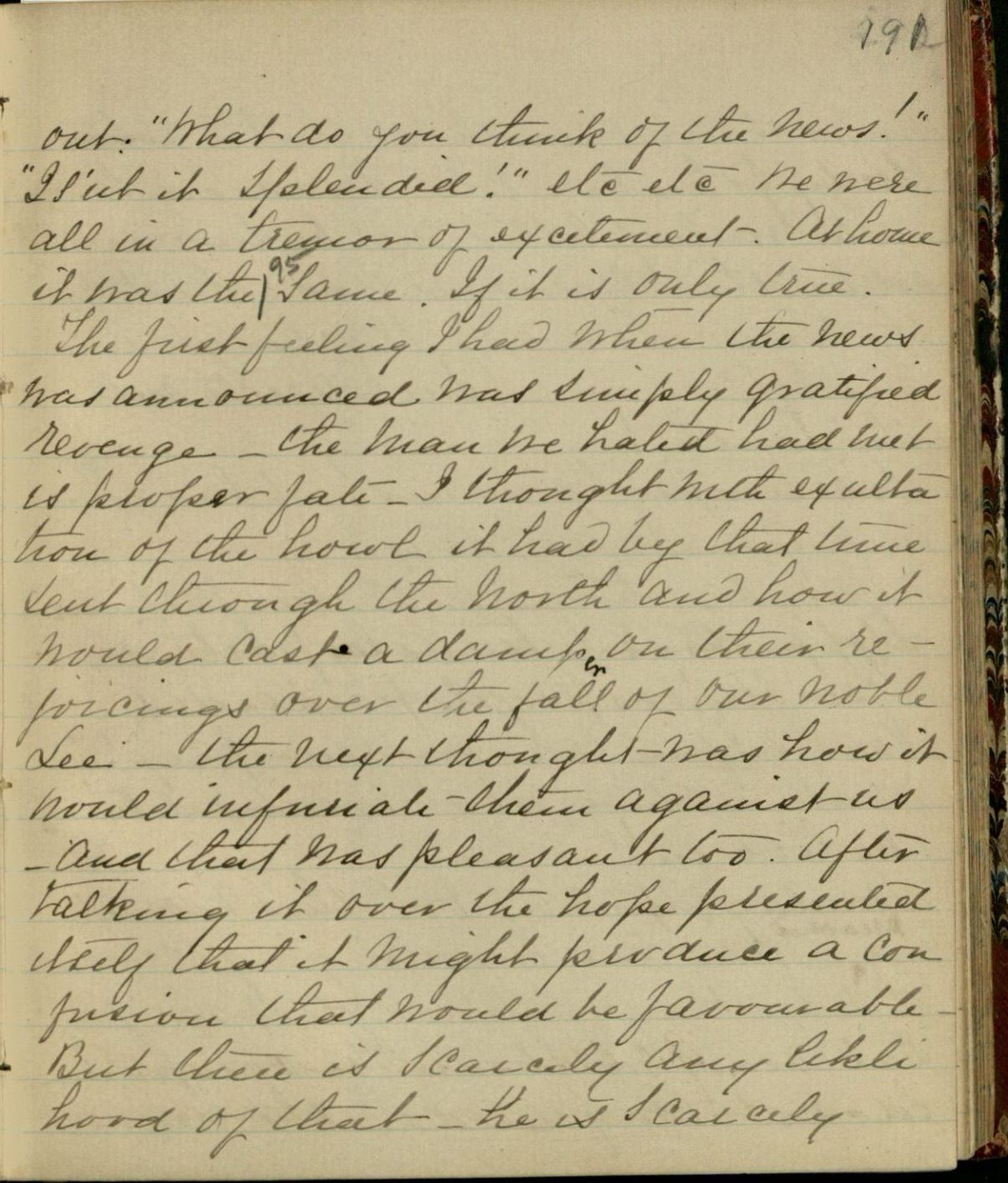 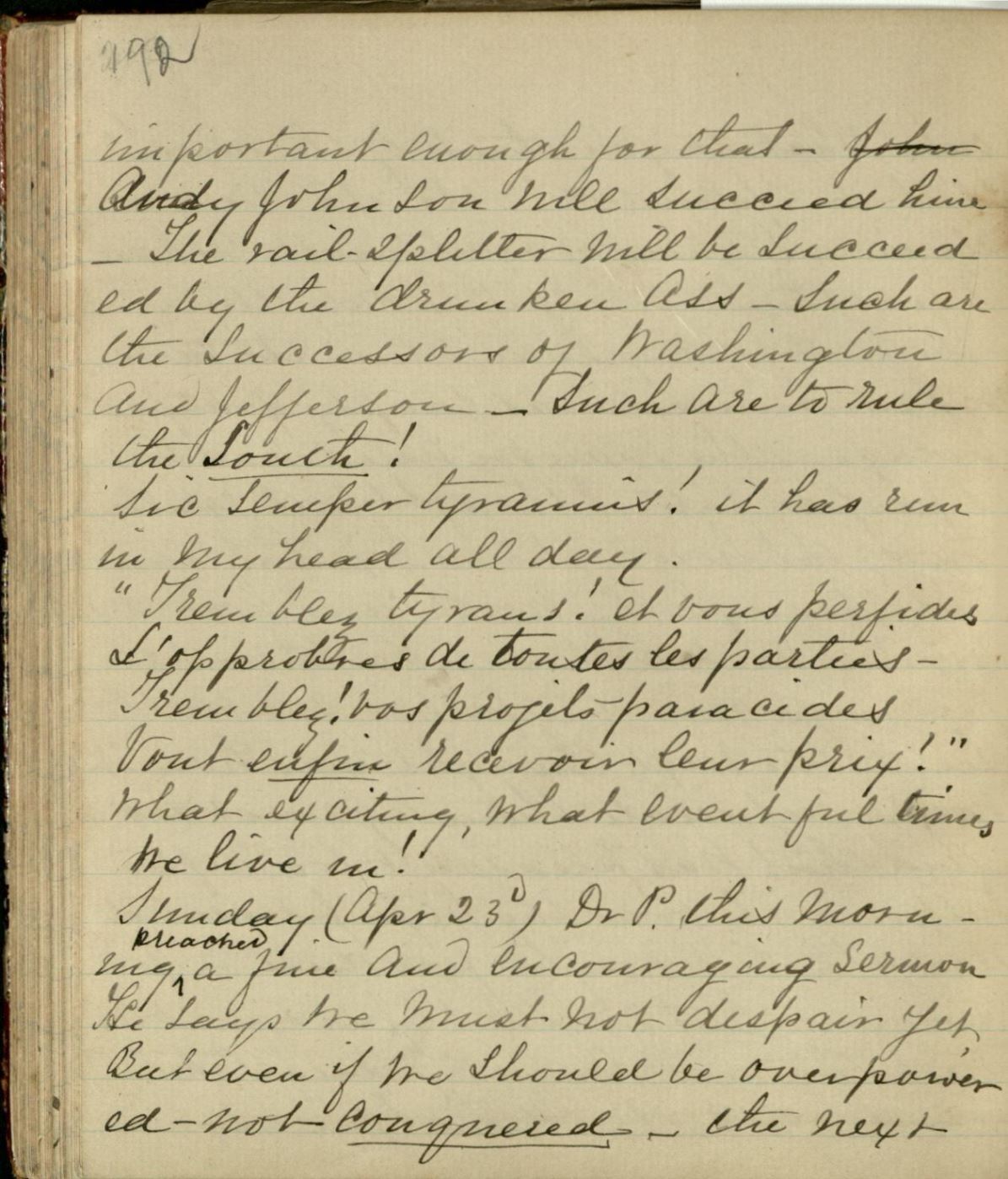 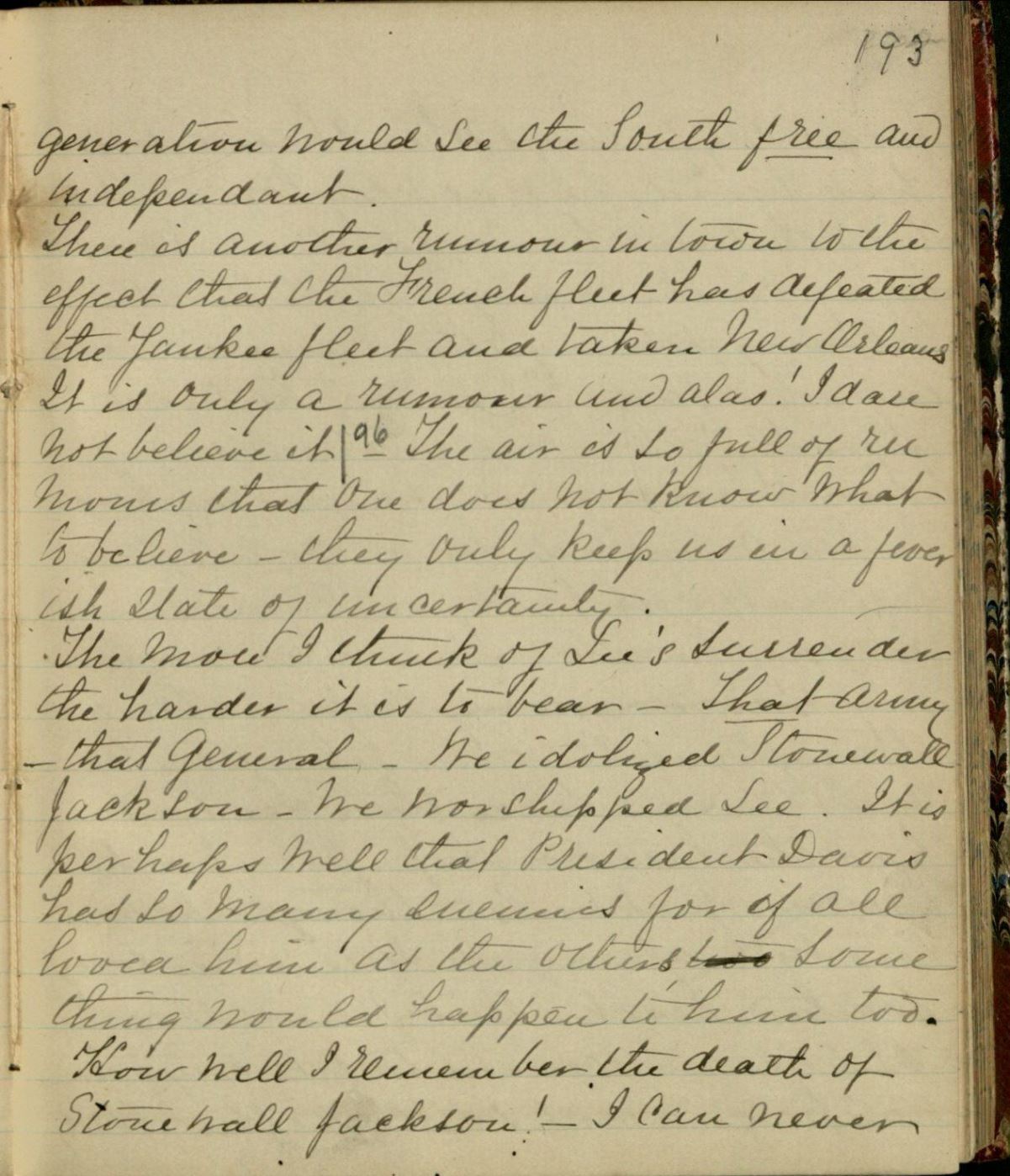 Friday, April 21st.
Hurrah! Old Abe Lincoln has been assassinated! It may be abstractly wrong to be so jubilant, but I just can’t help it. After all the heaviness and gloom of yesterday this blow to our enemies comes like a gleam of light. We have suffered till we feel savage. There seems no reason to exult, for this will make no change in our position – will only infuriate them against us. Never mind, our hated enemy has not the just reward of his life. The whole story may be a Yankee lie. The despatch purports to be from Stanton to Sherman – It says Lincoln was murdered in his private box at the theatre on the night of the 14th – (Good Friday – at the theatre) The assassin brandished a dagger and shouting, “Sic semper tyrannis – Virginia is avenged”, shot the president through the head. He fell senseless and expired next day a little after ten. The assassin made his escape in the crowd. No doubt it was regularly planned and he was surrounded by Southern sympathizers. “Sic semper tyrannis.” Could there have been a fitter death for such a man? At the same hour nearly Seward’s house was entered – he was badly wounded as also his son. Why could not the assassin have done his work more thoroughly? That vile Seward – he it is to whom we owe this war – it is a shame he should escape.

I was at Mrs. Leland’s saying my German when Mrs. Snowden brought in the news. We were all so excited and talked so much that Wilhelm Tell was quite forgotten. Our spirits had been so low that the least good news elevated them wonderfully and this was so utterly onlooked-for-took us so completely by surprise. I actually flew home and for the first time in oh, so long I was trembling and my heart beating with excitement. I stepped in at Aunt Josie’s to talk it over.

We are all in a tremor of excitement. At home it was the same. If it is only true! The first feeling I had when the news was announced was simply gratified revenge. The man we hated has met his proper fate. I thought with exultation of the howl it had by that time sent through the North, and how it would cast a damper on their rejoicings over the fall of our noble Lee. The next thought was how it would infuriate them against us – and that was pleasant too. After talking it over the hope presented itself that it might produce a confusion that would be favorable but there is scarcely any likelihood of that – he is hardly important enough for that. Andy Johnson will succeed him – the rail-splitter will be succeeded by the drunken ass. Such are the successors of Washington and Jefferson – such are to rule the South. “Sic semper tyrannis” – it has run in my head all day,

What exciting, what eventful times we are living in.