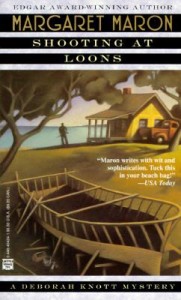 Judge Deborah Knott leaves her seat in Colleton County and heads to the Outer Banks in this, the third installment in Maron’s popular Deborah Knott series. Filling in for a temporarily incapacitated judge in Carteret County, Deborah is happy to be away from her nosy, trouble-making family and back in Beaufort, NC– home to her cousins, and the site of many happy girlhood summers. However, her nostalgic memories are rudely banished when she finds Andy Bynum, and old family friend, floating murdered in the surf. Deborah isn’t sure who would want to kill the amicable fisherman, but his death hangs like a pall over what was supposed to be her peaceful ocean getaway.

Andy’s death isn’t the only problem. North Carolina’s so-called Crystal Coast is on the brink of war–with increasing levels of tourism, there is continual tension between the High Tiders, who have been fishing the waters for centuries, conservationists, who want to curtail potentially harmful traditional fishing techniques, and developers, who are looking to get the most out of any land they can buy. Andy Bynum, a local and former poacher who unaccountably founded a conservationist organization, was in the center of the conflict. Deborah isn’t sure who killed him, but it’s a fact that many people wanted the stubborn community leader dead. But who pulled the trigger? Knott must carefully navigate a sea of lawyers, judges, greedy developers, tight-lipped locals, and unexpected old friends to find the killer.