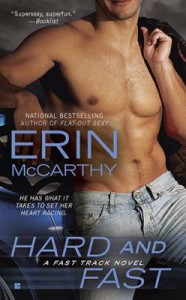 This book gets off to a fast start.  Who can resist a novel in which the heroine quotes Shakespeare and the hero compares himself to an old work boot?  Yet that’s just what Imogene Wilson and Ty McCardle do as they sit in her car debating  whether to go back into the party they’ve been at or take off to his condo for a night of more private adventure.  Ty is a stock car driver, just pushing past thirty and starting to think that he should begin dating women closer to his age with whom he might want to settle down.  Imogene is a graduate student in sociology at a Charlotte area university.   She and Ty meet because Imogene’s academic mentor is Tamara, the heroine in an earlier Erin McCarthy novel who is now married to NASCAR drive Elec Monroe.  Through Tamara Imogene meets drivers, their wives and ex-wives, and women who think it would be great to be a NASCAR wife.   Mixing with these people and coming across the book How to Marry a Race Car Driver in Six Easy Steps gives Imogene the idea for her thesis: she will test if it’s possible to follow a set of guidelines to success in an area as unpredictable as courtship.  Imogene is as straight-forward as they come, so early on she lets Ty know her interest in him is purely academic.  She even enlists his help to prepare her to move around more knowledgeably  in racing circles.  (The book says that drivers like a woman who knows the history of the sport.) Despite the odds, Imogene and Ty fall in love, but when Ty shares a secret that he had kept from Imogene and most everyone else, their romance hits a rough patch.  Readers of McCarthy’s previous race car romance, Flat-Out Sexy, will enjoy the reappearance of Tamara, Elec, Suzanne, and Ryder as characters in this book, and they can look forward to McCarthy’s next novel in which Suzanne and her ex-husband Ryder take center stage.