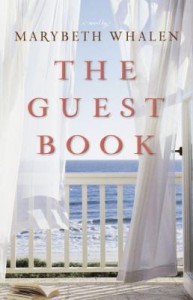 Macy Dillon and her family used to take a vacation to Sunset Beach, North Carolina every year. Her most treasured childhood memories are of walking the beach with her mother, brother, and especially her father. But Darren Dillion passed away when she was just sixteen, and Macy’s life has contained a gaping hole ever since. Macy is barely holding it together, working at the local grocery store, and suffering through her mother’s forced celebration of her father’s birthday each year. The only good thing that has happened since Macy’s father’s death is her now five-year-old daughter, Emma, even though Emma’s father walked out on them both shortly after she was born.

But this year at the birthday celebration they hold annually for her deceased father, Macy’s mom announces that they are once more taking a family vacation to Sunset Beach. Macy begins to hope. As a child, her father encouraged her natural artistic talent by asking her to draw a picture in the guest book at their beach house rental each year. Amazingly, another child, a young boy, would answer Macy’s drawings each year with a drawing of his own. The children traded drawings for ten years without meeting, but in what she knew would be her final drawing, Macy promised to come back and find him. Macy is determined that this trip to Sunset Beach will be the one in which she finds the boy. But when they arrive, no less than three men begin vying for Macy’s attention…and any of the three could be the artist. Will she ever find out his identity? And will her family ever find peace without her father?