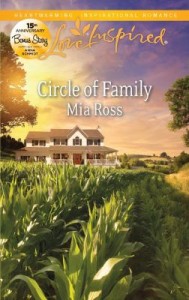 When Ridge Collins comes to Harland, North Carolina for his friend Matt’s wedding, he has no intention of staying in the sleepy little farming community.  Ridge’s dramatic entrance–he lands a vintage biplane in a field on the Sawyer farm just hours before the wedding–annoys the wedding organizer, Matt’s older sister Marianne.  Marianne likes everything predictable and orderly, and she is distrustful of showy men.  You can’t blame her.  Her ex-husband, Peter, was a good-looking wheeler-dealer who took advantage of Marianne’s trusting nature, and then dumped her when it suited him.  Only through self-discipline and sacrifice, and help from her extended family, has Marianne been able to make  a good life for her herself and her two children, Kyle and Emily.

Circle of Family unfolds the way that readers expect a romance to proceed.  Ridge stays on to help with the farm while his friend Matt is on his honeymoon.  He is a genial, handy person, and members of the Sawyer clan–including Marianne’s son and daughter–take a liking to him.  Marianne and Ridge spar over her suspicious, cautious nature and his vagabond ways.   Yet Marianne can see the good that Ridge is doing–working in the fields, fixing equipment, coaching the peewee football team, mentoring her son–and Ridge realizes that he is falling in love Marianne and falling out of love with a life without commitments or even a permanent address.  Matters come to a head when Peter, a deadbeat dad who has not seen his children in five years, shows up at the farm demanding to have regular visits with his son.  Marianne fears that Peter will demand full custody of young Kyle, but Peter’s game is more complicated than it appears.  To thwart Peter, Ridge makes an unexpected sacrifice that secures happiness for Marianne and the family that he hopes will soon be his.