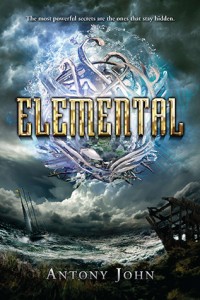 In the future, there will be a plague so great that it almost wipes the entirety of the human race off the planet. Sixteen-year-old Thomas lives with a small band of fourteen survivors, including his father and his brothers, Ananias and Griffin. This post-apocalyptic world is all Thomas has ever known, but like many teenagers today, Thomas feels as though he doesn’t belong. While everyone else in their small colony on Hatteras Island can control the four elements in some way, Thomas has no power. The others even seem afraid to touch him, as though his lack of power is contagious. Then, one stormy day, everything changes.

The adult Guardians (as they call themselves) have failed to predict a terrible storm. Quickly, Thomas and the other children flee to a shelter on the abandoned wasteland of Roanoke Island. But when they try to return, they discover something far more horrifying than a storm’s damage– their families have been kidnapped by pirates. Vowing to resist, the youngsters retreat back to Roanoke Island. With each passing day, they discover that their powers grow stronger and stronger, and that they possess more and different abilities than they ever thought. Spying on the pirates reveals still more– there is something special about Griffin, Thomas’ younger brother, and the pirates want him enough to kill. Although Thomas knows he doesn’t have a power, he has also been feeling stranger and stranger the longer they stay on Roanoke. Is it possible that the Guardians lied as well when they said he didn’t have a power? And if he does, what could his power be?

A gripping take on the legend of the Lost Colony, this dystopian novel brings the past to life in a future just as haunted by pirates, disease, and mysteries as the 16th century.