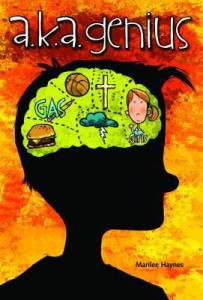 How can somebody who can’t even open a locker be called a genius? Well, Einstein couldn’t tie his shoes. So maybe Gabe Carpenter really is a genius. In any event, his IQ test results peg him as exceptionally bright.  However, Gabe isn’t sure that he wants to be labeled as some kind of child prodigy. To Gabe, middle school is about blending in and his survival strategy is to go unnoticed. If you blend in, then you can avoid the gossip mill. Unfortunately for Gabe, now that his sister Sabrina spilled the news, it’s going to be impossible for him to fly under the radar.

As if being the central subject for hallway taunts wasn’t enough, Gabe’s newfound status as resident genius jeopardizes his relationship with Maya, his second-best friend. Maya wears “the smartest student at St. Jude Middle School” label with pride and she’s not pleased to see Gabe steal that title away from her. Gabe’s teachers and parents have raised their expectations too. Getting Bs on tests isn’t acceptable any longer. Now that Gabe is a certified genius, his parents loan him out to tutor other St. Jude’s students, which wouldn’t so be difficult if Gabe didn’t have to tutor his crush, Becca. Teaching math while feeling tongue-tied isn’t easy, even for a genius.

The school also enrolled Gabe in a special extracurricular class for gifted students. Only six students in at St. Jude’s can take the class.  Maya, his former second-best friend, and Linc (short for Lincoln Jefferson Truman, thanks to a pair of overly ambitious parents), his best friend, are in the Greater Achieving Students class as well. Rachel, the cutest girl at St. Jude’s, Ty, the basketball star, and Cameron, wise-cracking smart talker round out the remainder of the Greater Achieving Students.

Sister Stephanie, or Sister Stevie as she prefers to be called, instructs the course. She explains that the class will focus on science and literature primarily and there will be no grades. The goal for the program is to enrich the selected students’ minds rather than quantify their intelligence like the rest of their classes. Principal Dooley and Sister Stevie decided that the Greater Achieving Students should participate in a state-wide competition that will pit them against middle schools all across North Carolina. Sister Stevie insists that the students work as a team to beat the reigning champion, Overton Prep. But getting six different personalities to collaborate is no simple task. Can the Greater Achieving Students at St. Jude’s pull it off? Or will tensions, like over Gabe’s genius, get in the way?

Marilee Haynes writes convincing from the perspective of a seventh-grade boy. She covers all the bases: girls, social acceptance, bodily functions, friendship, and pizza. Her lively characters and funny situations make a.k.a Genuis a playful and zippy read. But Haynes packs some substance into the book through a bit of family tragedy and the notion that a student is more than a grade or a label.