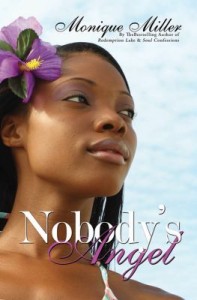 Ci Ci Jackson really is no angel.  As soon as she finished high school she jumped into a hasty marriage to a man who had no intention of being a steady husband to her and father to their children.  When that marriage broke up and Ci Ci lost custody of her children, she left rural Duplin County heading for the Research Triangle region of North Carolina, planning to start over.

And start over she did–with a new name, a new husband, and the habit of weighing all relationships based on what she can get out of them.  But she still carries a lot of hurt and anger from her earlier life and this spills out from time-to-time.  As Nobody’s Angel opens, Ci Ci (now calling herself Morgan Tracy) is about to be arrested for attempting to murder her new husband, Will.  While in jail awaiting trial, another prisoner, Desiree, offers Ci Ci/Morgan her friendship and Will visits to say that he has forgiven her, but she rebuffs their kindnesses and the religious sentiments attached to them.  Once she is again a free woman, Morgan resumes her ways, searching with a cold determination for the things that money can buy and a man to provide them.  Only when she meets her match does she come to realize that the path that Desiree, Will, and their church friends follow is the better way.

Nobody’s Angel is the latest book in Miller’s series of novels set in on near the fiction city of Silvermont, North Carolina.  For the earlier novel in the series, see The Marrying Kind and Quiet As It’s Kept.