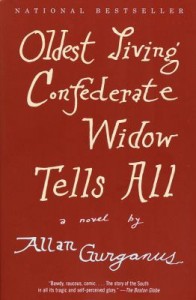 On-screen, the Oldest Living Confederate Widow Tells All is much like its novel counterpart. Clocking in at a hefty 718 pages, Allan Gurganus’ debut work is no quick read. And the miniseries isn’t exactly a half-hour sitcom either. Given the length and the detail of the novel, it’s not surprising it would take four hours to adapt the epic life story of Confederate widow, Lucy Marsden.

Lucy’s life story was heavily influenced by her marriage at age fifteen to Captain Willie Marsden, thirty-five years her senior, and, until his death, the last surviving Confederate soldier. Gurganus’ celebrated novel is told from the perspective of the still spunky ninety-nine year-old Lucy who resides in a North Carolina nursing home.

Oldest Living Confederate Widow Tells All spent eight months on the New York Times Best Seller list and sold more than four million copies. The novel also won Gurganus the Sue Kaufman Prize from The American Academy of Arts and Letters. All this proving it was worth the seven long years it took to Gurganus to write Confederate Widow.

Gurganus was born in Rocky Mount, North Carolina. He drew a great amount of inspiration from his grandmother, Willie Ethel Pitt Gurganus, who he would visit during his lunch breaks when in grade school. Despite their time together, she never shared her life stories with him. Lucy is his imagination of his grandmother’s experiences as a Confederate-era woman. 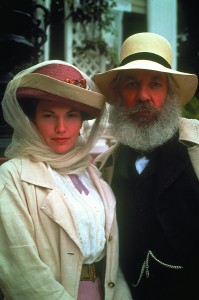 The adaptation won four Emmys (Art Direction, Costume Design, Hairstyling, and Best Supporting Actress) out of its nine nominations. The miniseries was filmed in Madison, Georgia rather than North Carolina. The novel was set in the fictional town of Falls, North Carolina.

Gurganus did not write the screenplay, which was instead adapted by Joyce Eliason. The New York Times review of the miniseries indicates that Gurganus played a small part in the production. And, Gurganus in turn spoke positively of the television adaptation.

In 2003, Ellen Burstyn starred as Lucy in a theatrical adaptation of Confederate Widow on Broadway. A critic from Variety notes that it was a very long two hours and twenty minutes, attributed partially to the fact that the page-to-stage adaptation was conceived as a one-woman show. Apparently the production closed after one official show. A few years later in 2007, the novel was adapted again for the stage, this time by Gurganus, as a part of the Theater of the American South Festival. The production was pared down to a one-act, one-woman play that was better received than its ill-fated Broadway predecessor.

Visit Sonar Entertainment’s site for a short clip from the miniseries and some production shots. But if you’re interested in watching the miniseries for yourself, copies of the movie are available through the UNC-Chapel Hill Library catalog in two locations in addition to the novel. The original blog post on Gurganus’ novel is available here.