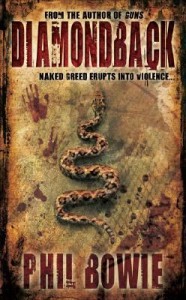 When the Cherokee were exiled from their mountains in 1838, their secrets and lore went with them, including how to find their precious gold mines. The new inhabitants of the Smoky Mountains have been searching ever since for these riches, finding some, but untold wealth still lies hidden in the North Carolina hills for those who know where to look. Moses Kyle isn’t the smartest of men, but he knows the backcountry of Haywood County, and one day he finds the ultimate motherload: a secret cave full of quartz and gold. But when the wrong people find out about his secret knowledge, they will do anything to extract the location. The local Cagle clan are many things, but patient isn’t one of them. Determined to souse out riches, they use their familial connections to a Pentecostal preacher (and his collection of snakes) to interrogate Moses.

Meanwhile, life has been difficult for John Hardin (formerly Sam Bass). Barely surviving the explosion that killed his girlfriend Valerie on the Outer Banks, he’s had to transition to a life in the Smokies. Even though the threat that placed him under witness protection is nearly gone, John is still living under the radar. When Moses Kyle goes missing and then turns up dead, John’s adopted mother, Hattie, begins to worry. She won’t rest until John looks into the situation, and once John goes looking, he finds more than he anticipated. Although he would like to keep living a quiet life with his successful aerial photography business, John can’t let these stones stay unturned. Along with his neighbor, the attractive, motorcycle-riding Kitty Birdsong, John investigates Moses’s mysterious death.

Sam Bass is a man with a past. When his heroic rescue of an elderly couple lands him in the news, dangerous characters from that past shatter his happy new life on Ocracoke Island. Bass’s beautiful girlfriend, a Cherokee by birth, is murdered, and Bass turns to her father for the training he needs to enact his revenge.