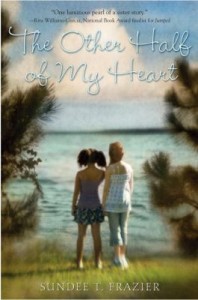 Minni and Keira King are fraternal twins, so they already look different from one another. But most people have trouble telling they’re related at all, or don’t believe it, due to a one-in-a-million genetic coincidence: Minni is white, and Keira is black. This phenomenon, known as “mixed twins,” occurs because only eight or nine chromosomes in the human genetic code determine skin tone. Each human being possesses the possibility to pass on a lighter or darker skin tone to their children, and both father and mother’s genes are in the mix. Born to a black mother and a white father, Minni and Keira often describe their family as a walking chessboard.

Now entering the sixth grade, the twins and their parents live in dreary, drizzly Washington State. But a phone call from their maternal grandmother in North Carolina means a visit to the sunny South. As a child, their mother competed in  the Miss Black Pearl Preteen pageant in Raleigh, winning the Miss Congeniality award. Grandma Johnson is determined that her granddaughters will continue the tradition, and is even more certain that one of them will win. But Mama and Grandma Johnson have very different ideas of what it means to be beautiful, and what it means to be black. While practicing for the competition, by turns both girls feel criticized and incomplete due to their many differences in appearance and talent. This pageant marks Keira and Minni’s coming of age, when they must learn to accept their uniqueness along with their identity as sisters.

Comments Off on Sundee T. Frazier. The Other Half of My Heart. New York: Delacorte, 2010.