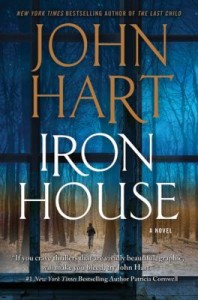 Michael knows how to kill, possibly better than anyone else alive. He dispatches his victims without emotion or drama, a virtue that makes him nearly invisible in New York City. He is the Old Man’s silent, deadly shadow. But before New York and the Old Man, there was Iron House.

A lifetime ago, he was a small but strong boy who protected his weaker, younger brother Julian at the Iron House Home for Boys in the Smoky Mountains. But one day something horrible happened, and 10-year-old Michael became a fugitive, fleeing into the snowy wilds of a North Carolina winter. He never saw his brother again, and just as he ran from Iron House, Michael also runs from his past. He is content to kill the dishonest and criminal, to be the Old Man’s strong right arm, to leave the boy he once was at Iron Mountain…until he meets Elena.

Carmen Elena Del Portal is more than just a woman; Michael suddenly finds that she is his whole life. When she finds herself pregnant, he knows he has to start over one more time. But the New York underworld won’t give him up so easily. The Old Man may wish for Michael to find a good life with a wonderful woman, but his henchmen are a different story. In no time Michael is on the run again, back to North Carolina and the brother whose existence he tried to protect by denying it. But if he thinks that life is simpler outside the Big Apple, he’s wrong. Dead wrong.

John Hart writes lovely prose, filled with a complicated cast of mobsters, lost boys, corrupt politicians, beautiful but mysterious ladies, and witches. Iron House looms over it all, a stark presence of which Michael, for all his running, may never be free. For an immensely entertaining, complex thriller, try Iron House!

Thirteen-year-old Johnny Merrimon refuses to believe that his twin sister is dead. After his sister’s disappearance, Johnny’s father left the family and his mother succumbed to drug and alcohol addictions. Now, a year after Alyssa’s disappearance and the crumbling of his perfect world, Johnny decides to take matters into his own hands and begins a personal search for his lost sister.   Detective Clyde Hunt shares in Johnny’s obsession over the missing Alyssa and keeps a protective, watchful eye on Johnny as he embarks on this treacherous exploration.   Through his search Johnny uncovers a disturbing side to his small hometown; news of a second missing young girl propels Johnny down an even more dangerous path.  This path brings new, life threatening revelations for Johnny; revelations that are felt throughout the town.

The chance for easy money tempts both the haves and the have-nots in this novel set along the Yadkin River near Salisbury. When Adam Chase, acquitted of a local murder years before, comes back to Rowan County, he finds that suspicion of him has not faded. He also discovers that the duplicity that wrecked his past may wreck both his future and the lives of the people he loves. When Chase tries to renew his tattered relationships, he uncovers secrets that upend his understanding of his past and set a new cycle of violence in motion.

When Ezra Pickens is found murdered, there is no shortage of suspects in Salisbury, N.C. The wealthy but unpopular lawyer made a lot of enemies over his long career and it’s left to his son and partner, Jackson, to unravel the mystery.