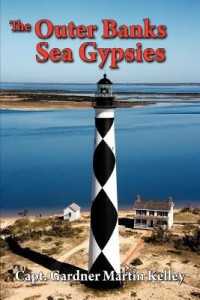 Captain Gardner Martin Kelley has “many tales to tell” from a long life spent working on yachts, steamships, and in a World War II Liberty Shipyard. Born in 1913 on an island off the coast of Maine, this ninety-eight-year-old author has crafted a gripping story of rum running and survival on the Outer Banks beginning in 1923, as the dawning of a new age in technology saw the end of the very last cargo sailing schooners.

His tale follows three individuals, beginning with the young sailor Ron Fickett, whose father is brutally murdered by scavengers after the elder Fickett wrecks their schooner in the infamous Graveyard of the Atlantic off the North Carolina coast. The second plot concerns Johnny Mapp, one of the many “bankers” who arrive to salvage material from the schooner and witnesses Captain Fickett’s murder. He decides then that he and his family should move on, away from such brutality. The Mapp family build a floating houseboat, living off the land and selling their catch from the bountiful waters to buy what they can’t hunt or gather. Meanwhile, Ron searches first for his father, and then for revenge when he learns the truth of his death.

Finally, Kelley’s story follows Cissy Mapp, Johnny’s younger sister, who is tragically kidnapped by Cuban rum runners and sold into slavery. She escapes and assumes the identity of a street urchin called Tiar, growing up among the orphans and street children of Havana. She sells her body to survive, but eventually finds her way back to her family … with a plan to corner the market in running liquor, illegal during this era of Prohibition.

A rousing tale from an author with first-hand knowledge of much of what he writes, readers will enjoy learning about Captain Kelley’s life through his writing, and through the many photographs of the author, the ships, and the land included in this self-published novel.