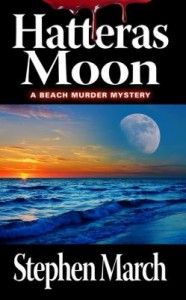 Jack Delaney and Virgil Gibson became friends in high school, when star athlete Jack noticed Virgil’s dedication to the football team, even though Virgil would always be just a bench warmer.  Jack and Virgil did some dumb, crazy things together–like jumping off the bridge over Oregon Inlet.  But after high school they went their separate ways: Jack to Vietnam and Virgil to college.  Jack was injured in Vietnam and came back to the Outer Banks to be a fisherman like his dad.

But Jack remained a dare devil, and before long Jack began using the trawler he inherited from his father to smuggle marijuana.  Soon Jack has a large house on the beach, additional property, and a life that suits him, if not the government.  Meanwhile, Virgil has grown dissatisfied with his life.  Teaching undergraduates at a small college has lost its allure, and his marriage has grown stale.  More than a decade after high school, Virgil returns to Hatteras Island for the summer to re-assess his life.

Looking up his old friend Jack is among the first things that Virgil does.  Jack’s life looks attractive, even though Jack has money problems and is being threatened by one of his business associates.  Ever one to take a risk, Jack branches out into a new endeavor, one that brings him in contact with dangerous men with a different agenda.  When a simple shrimping trip turns deadly, Virgil plunges into a dangerous game of revenge.

Hatteras Moon is set in the late 1980s and some readers will be reminded of the Iran-Contra Affair by certain plot elements.  But a knowledge of Reagan-era foreign policy is not necessary to understand this dark tale of greed, loyalty, and revenge.

Chuck is renting a rather depressing trailer from his older cousin Cross, who owns and operates the body shop where Chuck works.  Chuck gets into trouble working for his cousin at the body shop, which has a successful after-hours program of stripping and repainting stolen cars.  An unlikely partner named Wanda falls into Chuck’s life, bringing with her mischief, sensuality, whimsy, and a love of animals.

Cross is a violent man with a shady past, and when Chuck begins to stand up to him, Cross takes out his anger on Wanda and her pet armadillo and canary.  Chuck and Wanda retaliate by seeking revenge and a new life far from their Eastern North Carolina trailer park.

Zeb Dupree is down on his luck in New Orleans when he finds a one-eyed abandoned puppy in a trash can.  Zeb’s wife is leaving him for another man, his father recently committed suicide, and he just lost his job as a newspaper editor.   In the midst of this mid-life crisis, Zeb heads back to Cedar Springs, North Carolina, the town where he attended college on a scholarship in the 1960s.

The novel alternates between the present and flashbacks of Zeb’s life growing up in the fictional Seaton, N.C.   This emotional shuffling between the past and present intensifies Zeb’s struggling efforts to rebuild his life.   After his return to Cedar Springs, Zeb works as a condo painter and a fiddler in a traveling country-rock band, dates an artist named Jenny, and tries to reconnect with his family.   His family members are also plagued by the loss of their father and the stress experienced by a younger brother who is a Vietnam vet.   Zeb begins to find peace (or at least patience) when he buys the property surrounding his father’s old house and begins to renovate the structure and farm the land.