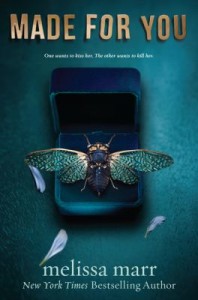 Eva Cooper-Tilling is the town darling of fictional Jessup, North Carolina. As the granddaughter of a prominent minster and a girl born into a family with wealth and status, Eva is very popular and above reproach to most of her peers. So, it is big news when Eva is the victim of a hit-and-run, and it’s even bigger news when evidence points to the accident being a deliberate act.

While in the hospital, Eva refuses to see anyone but her closest friend Grace. But during her stay, Eva runs into her old friend Nate and the two are soon on their way to redeveloping their old friendship, but with new feelings. However, Nate and Eva’s renewed closeness only seems to make the would-be killer even more upset. The bodies of Eva’s peers start showing up with messages to Eva.

A stalker-killer and amorous feelings for Nate aren’t all Eva is dealing with after the hit-and-run. Whenever someone touches Eva she receives a vision of their death. In order to avoid these flashes, she must initiate contact with the person before they touch her. Eva confides in Grace, who is skeptical, and in Nate, who believes her. When Eva realizes that the killer will continue to go after her peers to get his message across, she quickly decides to use her new ability to her advantage. Will she be able to discover the killer before he gets his hands on her?

Throughout Made for You, readers are provided with insights into the mind of the killer, who thinks of himself as “Judge.”  This tale is a great suspenseful thriller that will capture the minds of teenagers and older readers. Do you think you can figure out who the killer is before all is revealed?

Comments Off on Melissa Marr. Made for You. New York: Harper Teen, 2014.