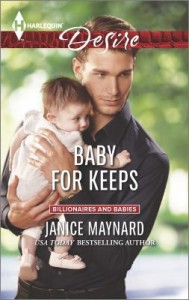 Is it true that most of us are still haunted by our high school years?   That’s certainly the case for Dylan Kavanaugh.  Although Dylan was a good-looking athlete from a prominent family, his memories of  his high school years are mixed.  Dylan is dyslexic; reading was a struggle for him, a struggle he hid from his friends, if not his teachers.  Knowing the seriousness of his disability, the school got him a tutor.  Mia Larin was two years younger than Dylan, but she was off-the-charts bright and a quiet, patient person who helped Dylan through many assignments, including his memorable take on Romeo and Juliet. Dylan still cringes when he thinks how he treated Mia.

Imagine Dylan’s surprise when Mia shows up back in their hometown–with a baby but no husband.  In the years since high school, Mia went on to get two doctoral degrees.  She was working as a medical researcher in the Research Triangle of North Carolina when she heard her biological clock ticking.  With no man in her life and a job that she thought was secure, Mia decided to have a child through artificial insemination.  Now she has lovely little Cora, but the funding for her lab dried up, and she is close to broke.  She has come back to the little mountain town of Silver Glen to regroup.

Once Dylan learns about Mia’s situation, he springs into action.  He sees helping her–with a job and a place to stay–as a way to ease his conscience over how he treated her in high school.  But Mia’s not the shy, young nerd she was in high school.  She has her pride–and she has quite a nice figure.  Mia had a crush on Dylan in high school, a crush that he never noticed.  Now, as grownups there is a mutual attraction, but should they act on it?  This being a romance, they do, but that’s not the end of it.  Self-images formed in high school, professional setbacks and opportunities, and Dylan’s fear of fatherhood make a long road to happily-ever-after.

Comments Off on Janice Maynard. A Baby for Keeps. Don Mills, Ontario: Harlequin, 2014. 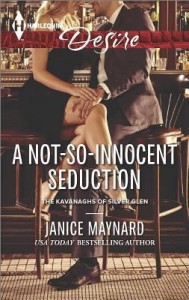 “Being human is to be lonely. It’s a rare gift in life to find the person that completes you.”

When Zoe Chamberlain’s VW bus, Bessie, breaks down in Silver Glen, North Carolina, Zoe takes it as a sign that it’s time to kick back for a while. Zoe is constantly on the road and has spent many nights sleeping in Bessie, so booking a room at the Silver Beeches Lodge for six weeks straight is a huge indulgence. The most Zoe expected was to enjoy pampering at the lodge and to have time to explore the beautiful town of Silver Glen. Zoe gets much more than she bargained for in the form of one of the owners of the Silver Beeches Lodge, Liam Kavanagh. Life on the road can get really lonely, and there might be more to explore here than just the town.

Liam Kavanagh has lived in Silver Glen all of his life – his ancestors actually helped to build the town. Since the death of his father, while Liam was still a teenager, Liam has shouldered his family, including his mother, a multitude of siblings, and the family business, the Silver Beeches Lodge. Liam loves his job and the fact that he has loads of family right down the road, but there just has to be something more. Then Zoe Chamberlain walks into the doors of the lodge and takes his breath away. Liam knows he just has to get to know her, but that’s easier planned than accomplished.

Liam is a handsome man and Zoe is interested. The two of them start to spend time together, but where Liam shares himself with Zoe, she continues to hold back. Now, Liam knows how secrets and the pull of mystery can lead to devastation–he witnessed it with his father. So, how can he be falling in love with Zoe when he doesn’t believe he can trust her? Zoe is enjoying her time in Silver Glen and the man she’s spending time with, but the problem is that time runs out. It is only a matter of time before she’s discovered and has to move on, but how can she leave the place and the man that are just beginning to feel like home?

A Not-So-Innocent Seduction is the first novel in The Kavanaghs of Silver Glen series. The second novel in the series is Baby for Keeps; it tells the tale of Dylan Kavanagh, who plays a part in helping his big brother Liam take a chance on his love for Zoe.