Jody Meacham. Through the Heart of the South. San Jose, CA: Doodlebug Publishing, 2010. 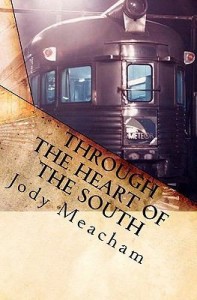 It’s the summer of 1968, and Chris McAndrew should be relaxed and looking forward to his senior year of high school in Shortridge, North Carolina. But this year, the local black school, Booker T. Washington High, is closing, and all of the students there will matriculate at the formerly whites-only Shortridge High. The School Board fought long and hard against this integration, and when nothing prevented it, did everything they could to make this year as uncomfortable as possible for the black community. Class activities and trips are eliminated, and if any black player should even think of scoring the winning point in a football game, there will be hell to pay. Chris is convinced it’s just plain wrong to treat anyone this way, but speaking up means being labeled a “nigger-lover” by the rest of the whites in Shortridge, especially his girlfriend Susan Marks’s angry father, Wade.

But as Chris and his best friend Cam get to know the new students, especially Malachi Stevens, a particularly gifted singer and football player, it gets harder to be friends in the classroom but treat them as less than human when school lets out. Susan and the rest of the town continue to try to convince Chris that “they” are the ones taking everything from the white population and polluting it, but somehow that doesn’t make sense. The situation finally comes to an ugly head when a local NAACP representative is murdered and found by his young daughter, and a teenage biracial couple flee to South Carolina to get married, only to return under a shadow when they find out it’s illegal. With the Vietnam War hanging over their heads and the railroad industry that supports Shortridge sliding under their feet, the graduating class of 1969 must at least agree on one thing: the times, they are a’changin’.

This heartfelt and engaging coming-of-age novel is Meacham’s first, and is based partially on his own experiences growing up in Hamlet, North Carolina.