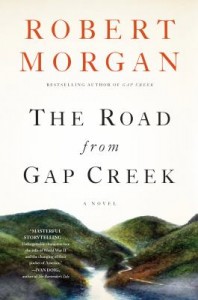 Readers are punched hard and early on with the death of Julie and Hank’s favorite son, Troy. The news devastates the family. Troy volunteered in the Civilian Conservation Corps where he met a recruiter for the Army Air Corps. The Army sent Troy to work on a base in Georgia. He reassured his family that he wouldn’t get sent into active duty. Until the Army shipped him off to England.

Annie, upon the news of Troy’s death, is propelled into the past. She recollects the family’s history in a stream of events: the move from Gap Creek to Green River, Troy’s beloved dog, Old Pat, and later Troy’s less accepted fiancée, Sharon, Velmer’s typhoid fever, fallout from the Depression, acting in high school plays, church life, bootleggers. Morgan does not adhere to chronological order, as he shifts between Annie’s recollections and present day. Her stories aren’t arranged in a strictly logical sequence. Rather, they present the effect of a patchwork memory. Morgan deftly combines Annie’s string of loosely collected memories, so that stories that seem like confined events later make sense in the scheme of the family’s history. He evokes a true feeling of everyday life where the characters on the page have breath and a pulse.

But most convincingly of all, Morgan depicts the force of family. Annie emphasizes the lack of opportunity in dead-end Green River, for herself and for Troy. She dreams of acting, traveling elsewhere, and owning fine clothes. She wants out of Green River. But when she’s offered the chance to model, possibly legitimate, possibly a scam, Annie never finds out. During that moment, she realizes she couldn’t leave her family that depends so much on her behind. Annie does not exist in isolation; she is a strand in the Richards family web. This fact becomes much truer and resonates much stronger when Annie begins her own family. The microcosm of the Richards family and its history echoes that of people and history at large.

Fans of Gap Creek will enjoy this chapter of the Richards family’s struggles and joys, but newcomers will be equally charmed by Morgan’s naturalistic story-telling. Morgan could write the Gap Creek saga ad infinitum. It’s a slice of life, and an interesting one to dig into. The Road from Gap Creek observes a period of momentous and irrevocable change in American history, and the Richards family history.

Set in the North Carolina mountains in the 1920s, This Rock continues to explore the themes and setting used by Morgan in his popular 2000 novel Gap Creek. The story follows the young brothers Muir and Moody Powell. Muir is earnestly committed to becoming a preacher, but finds his attempts at spreading the word frustrated by his older brother, who is much more interesting in running moonshine and gambling. As Muir struggles to understand his faith, the boys’ mother fights to keep the family together in the still raw wilderness in which they live.

Gap Creek follows a newlywed couple in Appalachian North and South Carolina in the early 1900s. Julie Harmon Richards, an independent hard-working woman, narrates the story of the difficulties she and her husband face just trying to get by. Battling fierce weather, personal tragedies, and thieves, this novel details the difficulties of mountain life. Morgan gives careful attention to the details of farm work, with a particularly memorable description of the butchering of a hog. Gap Creek was a selection of the Oprah Book Club in January 2000.