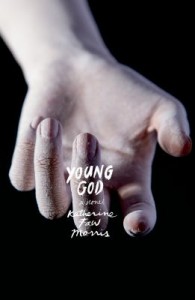 Nikki has been living in a group home, under the care of the Department of Social Services, because both her parents are drug users and minor criminals.  As Young God opens, Nikki is spending time at a falls with her mother and her mother’s younger companion, Wesley.  When her mom slips off the cliff and falls to her death, Nikki is alone.  Alone but resourceful.  After a brief interlude with Wesley, Nikki steals his truck and heads out to find her father who has recently been released from prison.

Coy Hawkins, Nikki’s dad, was a drug dealer before he went to prison.  Nikki is disappointed to see that her father has chosen pimping as his post-prison occupation.  Nikki’s determination to get her father back into dealing–and dealing on a larger scale–will have dramatic consequences for both of them in this dark tale of ambition, violence, and betrayal.