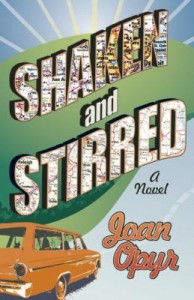 Tar Heels know that you can’t go home again–but sometimes you have to.  Poppy Koslowski has been living clear across the country from her loving, but dysfunctional, family.  Growing up, Poppy and her mother lived with her maternal grandparents in Wake County, North Carolina.  Or, that’s how it was until her grandfather, Hunter, ran off with the boozy mother of Poppy’s friends.  Before too long, Poppy herself left–to college, then graduate school, to jobs, moving ever further north and west, until she settled in Portland, Oregon.

As Shaken and Stirred opens, Poppy is recovering from a hysterectomy and is feeling sore and sad.  Poppy’s long-time BFF, Abby, who is a nurse, is keeping a watchful eye on her, and she’s present when Poppy gets the phone call telling her that her grandfather is dying.  Poppy can’t refuse her mother’s request that she come home to help her and Nana through this difficult time.  Abby volunteers to come too–Poppy is not back to full strength and Wake County is home turf for Abby too.  Abby can visit with her mother and help Poppy’s family make sense of Hunter’s medical condition.

But being back in North Carolina brings back so many memories for Poppy–her parents’ separation, her grandmother’s strict sense of propriety, her attempts to fit in at school and at home, her grandfather’s drinking.  Even as a child, she knew that her grandfather’s behavior was irresponsible, but he took an interest in her and took her on some of the most memorable adventures of her youth.  But all that came to an end when Hunter took off with Jean–the mother of Poppy’s first love, Susan.  Now Hunter’s whole life will be reviewed, and that old can of worms–and many others–will be opened.