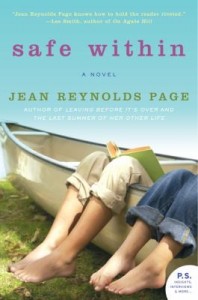 Elaine and Carson Forsyth have been married and living in Chapel Hill, North Carolina for nearly thirty years when he is diagnosed with pancreatic cancer. At first Elaine and Carson carry on with their lives but later Carson decides he wants to spend his remaining weeks in Elaine’s childhood home–a whimsical house her parents built in the trees above a lake just outside of the Triangle. Elaine is devastated at losing her husband, but what’s worse when he passes on she’ll be left with her acerbic mother-in-law. Greta Forsyth does not like her daughter-in-law. Although both her son and his wife have tried to convince her otherwise, Greta knows what the woman who walked in on Elaine and that other boy saw all those years ago. She knows that her supposed grandson, a handsome young man in his late twenties called Mick, is really a cuckoo’s child. Her son might be taken in, but Greta is not that kind of fool.

Elaine doesn’t know how to get through to Greta; at this point in their long, bitter relationship, she’s stopped trying. Mick, her son, knows to leave his grandmother alone, but he can’t be absent for his father’s last few weeks of life. He comes home to Carolina from his shipyard job in Rhode Island, but runs into trouble he doesn’t expect when he stops to catch up with some old acquaintances. His high school sweetheart, a beautiful local girl named Kayla, went away for a time with her mother after she and Mick broke up. When the two returned, they brought Kayla’s new little brother with them. Kyle is six now, and everyone but Mick is sure they know who his parents are in reality. Caught between Greta’s accusation that he’s not his father’s son and Kayla’s family’s anxiety over his attempt to reach out to little Kyle, Mick must decide who he will be for himself. As the family dynamics shift with Carson’s death, Greta and Elaine must also reconsider their assumptions.

The illness of Lola’s mother changes the Vines family in ways that no one could have ever imagined. When her parents, Rosalind and Roy, married against the wishes of his parents and left Virginia for good, they assumed that they would never have to revisit that painful time. They moved to Linton Springs, North Carolina, made a family with their two daughters, Lola and Janie Ray, and have a happy life.

Unfortunately, Rosalind begins to notice strange rashes on her arms and legs and discovers that she has a blood disorder. Roy, heartbroken that he cannot afford her medical costs, makes a desperate plea to his parents to loan him money. They are still bitter about the way that he severed their relationship years ago, and they strike a deal with him: take home Luke, the grandson that they assume is his child, in exchange for the resources. Although this is an impossible decision, Roy is determined to save his dear wife.

No one in the Vines family anticipates the upheaval that Luke’s arrival causes. The parents and children ignore the small-town gossips who pounce on the story and quickly figure out how to function as a content family. However, Roy and Rosalind have a difficult time accepting the ongoing manipulation of Roy’s family, especially his twin brother, Mont. Although Lola, wise at sixteen, figures out the truth of Luke’s background, her parents go to great lengths to protect Luke’s feelings. Knowing the facts, they fear, would crumble his sense of self, and, because the family becomes so attached to him so quickly, they are especially protective of him.

Although change comes quickly to the Vines, they maintain the core values of  their family: support and love.

This story is told through the observations and feelings of Lola, Luke, Rosalind, and Roy.

Comments Off on Jean Reynolds Page. Leaving before It’s Over. New York: Avon, 2010.

Jean Reynolds Page. The Last Summer of Her Other Life. New York: Avon, 2009.

Julie Maries (Jules) Fuller returns to her hometown of Ekron, North Carolina to be with her mother who is dying.  Jules has put her life in the film industry in Los Angeles on hold to nurse her mother, but she also hopes her mother will show her how to be a good mother to the baby she is carrying.  Jules’ mother dies too quickly to help her, and Jules soon finds that she is facing a challenge greater than single parenthood.  A young boy who is in a class where she has been a guest teacher accuses her of making sexual advances.

The accusation against Jules spreads fast across the little town.  The locals start to talk, not just about this incident, but also about other things about the Fullers that have been problematic to some people: Mr. Fuller’s drinking and accidental death, Jules’ “wild” youth, her brother Lincoln’s homosexuality. Jules has her defenders, including her brother, her high school boyfriend, and the uncle of the boy making the accusation.  Soon the reader finds that the men and their families are connected to Jules’, and that the Fullers are not the only family in Ekron with turmoil and secrets.

The author handles some difficult material–family violence, child sexual abuse, intolerance, and the cruelty of gossip–with grace, producing a rewarding novel in which several characters find their way to emotional maturity and peace with the past.