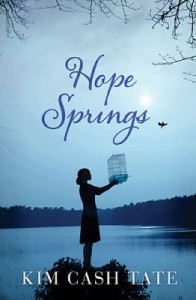 Hope Springs is a small, fictional town 40 minutes east of Raleigh, North Carolina. Geraldine “Grandma Geri” Sanders, the matriarch of the Sanders clan, holds family reunions here every summer and every Christmas, welcoming her far-flung chicks back to the nest where they grew up. Some, like her granddaughter Libby who lives in Raleigh, haven’t strayed so far. But her other adult grandchildren are so far away; some haven’t visited in years. Sisters Cyd and Stephanie grew up in St. Louis, Missouri, where they spend most holidays with their husbands’ families. Janelle has refused to make the journey down from her home in Maryland ever since she lost her husband two years ago.

The Sanders aren’t the only family in Hope Springs hosting a reunion: the Dillons, their neighbors for many years, are all congregating after the death of their patriarch, Jerry Dillon, who also happened to be the local pastor. His son Todd and daughter-in-law Becca are also heavily involved in ministry, but have moved outside of Hope Springs. Now all the adults from both families have a chance to reconnect over shared happiness and sorrow, and each person must ponder what God truly wants for him or her in their hearts. When Grandma Geri contracts cancer, everyone pulls together, and what is meant to be a Christmas visit turns into a months-long extended stay.

While the novel is told through the eyes of Stephanie, Janelle, and Becca, we witness everyone’s journey together as a family in more ways than one. Will Stephanie be able to adjust to her family after so many years away? Will Janelle eventually overcome her husband’s death, and even find new love? Will Becca do what’s right for herself and her children? Most importantly, will everyone survive in a house full of young children and toddlers? Only God has the answers.