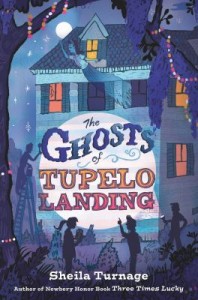 A laugh floated down the stairway, secret and low. My heart jumped. So did Dale. “Steady, Dale,” I said, my voice shaking. “Don’t leap to conclusions. A good detective starts with the obvious and works toward the strange.”

Sixth grade is about to start, and scrappy orphan Mo LoBeau is convinced that the Desperado Detective Agency needs a new case to crack. Since the Agency (comprised of Mo, her friend, Dale Earnhart Johnson III, and his dog, Queen Elizabeth) successfully solved a murder, they’ve only been hired on for two lost pet cases. Mo wants something ground-breaking to rev up business and make a name for Dale and herself as sixth grade sleuths. Luckily, she doesn’t have to wait for long–a new case is right about to fall into her lap.

The novel opens the day of the auction of The Old Tupelo Inn, which creates big buzz around the small town of Tupelo Landing (population now 147, following the past summer’s murder). Just about everyone in the town is at the auction, including Mo, Dale and one of Mo’s caretakers, Miss Lana, the owner of the local diner and Old Hollywood aficionado. Miss Lana has her heart set on an umbrella stand, but after an unfriendly woman from out of town (dubbed “Rat Face,” by Mo) makes a move to buy the Inn, Miss Lana hastily outbids her and by accident becomes the new owner of The Old Tupelo Inn along with the partial contents of the property and some very serious fine print.

According to the fine print, the inn is haunted by a ghost. Mo, and Dale after plenty of coaxing, set out to identify the ghost. Their mission couldn’t have come at a better time. A few days later, Miss Retzyl, their new teacher, tells the class that as part of the 250th anniversary of Tupelo Landing, she wants each student to interview a town elder. Mo’s arch-enemy Anna Celeste Simpson (aka Attila) somewhat unfairly claims Mo’s adoptive grandmother and the richest and nicest old person in town, Miss Lacy Thornton.

But Mo is ready to one-up Attila. She names the unidentified ghost of The Old Tupelo Inn as her interview subject. To Mo, “there ain’t nobody older than dead.” If she and Dale can determine the ghost’s identity, then they’re sure to have the best report and earn themselves a little extra credit in the process. Finding a ghost and convincing it to reveal who it is and why it’s haunting the inn isn’t an open-and-shut case however. Meanwhile, the presence of a new boy called Harm Crenshaw in Mo’s class irks Mo almost as much as living in Tupelo Landing irks Harm. He informs everyone he meets that he is only temporarily staying in Tupelo Landing until his brother Flick (a confirmed, good-for-nothing punk) can collect him to return to Greensboro. And Miss Lacy signs on to bankroll Miss Lana’s staggering bid for the ramshackle Old Tupelo Inn, yet it surfaces that Miss Lacy might not be as rich as everyone believes her to be. Could Miss Lana and Miss Lacy’s ownership of the inn be in jeopardy?

The Ghosts of Tupelo Landing is novelist Shelia Turnage’s second Mo LoBeau mystery. Turnage creates a magical setting in the fictional Tupelo Landing — it’s a wacky, charming small town. Outrageously spunky and spirited Mo has a lively voice and her narration makes the pages turn quickly. Don’t let the young adult packaging stop you from picking up Turnage’s follow-up to Three Times Lucky. With Mo as your guide, Tupelo Landing is quite an entertaining place to pass some time. Click here to read a blog post on the first novel in the series, Three Times Lucky.

Moses “Mo” LoBeau is no stranger to mysteries. Found as an infant floating down the Tar River on some debris during a powerful hurricane, the rising sixth grader’s very existence is something of an oddity around Tupelo Landing. Which is not to say that she is shunned by the (fictional) eastern North Carolina town; on the contrary, Mo is a star. Helping her guardians, Colonel LoBeau (who found and named her) and Miss Lana, run the local cafe (which serves such specials as peanut butter and banana on Wonder Bread and Mountain Dew as the drink du jour), Mo is beloved by all of the hotspot’s customers. Although she would love to know who her “Upstream Mother” is, and she tries to find her by sending letters in bottles along nearby tributaries, Mo is content. But then Joe Starr, a lawman with too many questions about the Colonel, shows up, and  Miss Lana goes missing.  The town is shocked when Mr. Jesse is found murdered and Mo’s best friend, Dale Earnhardt III, was the last to see him alive. With all this trouble so close to home, Mo steps up as pint-sized detective to crack the multiple cases. In doing so, she preserves  the only family she has ever known and returns her close-knit village to normalcy.