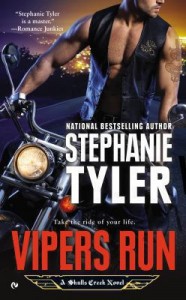 Calla Benson works in the office of a private investigator named Bernie. When Calla’s grandmother died last year, Calla was supposed to inherit her grandmother’s money and the bar that she owned. However, Calla’s half-brother, Ned, got to the money and the bar first. Ned used their grandmother’s debit card to get to her money and forged Calla’s signature on the bar deed in order to sell it. After turning to Bernie for help finding her brother, Calla ended up working in the PI’s office. Calla may handle the office for Bernie, but his cell phone is where the most important calls come in and it is usually with him. When Bernie’s cell is left in the office and won’t stop ringing, Calla can’t help but answer – not knowing that this one call will change her life forever.

Christian Cage Owens is a former Army Ranger and also a member of the Vipers Motorcycle Club in the fictitious town of Skulls Creek, North Carolina. Cage was born into the motorcycle club life, but he was born into the Heathens Motorcycle Club. Escaping as a teenager from this corrupt club, Cage didn’t know anything but MC life and so he turned to Preacher, the leader of the Vipers. The Heathens have had it out for the Vipers ever since Cage turned on them. To protect his brother Vipers, Cage has searched out the Heathens’ secrets. Cage gathered evidence that can bring down the Heathens MC, but they found him before he had the chance to pass on the information. Cage uses his dying breath to call his Army-buddy- turned-PI, Bernie, who will know what to do with the information. Cage is surprised when Calla answers but gives her the information, ultimately endangering her life. Nevertheless, Calla provides Cage with a reason to fight for his life.

Left with Cage’s promise to find her, Calla goes on the run and ends up in the house of another friend of Cage and Bernie’s. Calla is mourning the death of a man that she never even met face-to-face, when that same man appears ready to make good on his promise. Neither can deny the connection that was forged between them, nor the passion that they share for one another.

Vipers Run is the first novel in the new Skull Creek series. This book is a romantic suspense in which the two characters will have to face the demons in their past. Calla may not be as naïve as she appears, but is she ready for the MC world? Cage has kept his promise so far, but will he look at Calla the same after learning the details of a fun college night turned nightmare?

The Hamptons live an Edenic life on their plantation the western North Carolina. Mrs. Hampton died young, but Mr. Hampton has had the pleasure of watching his children Walter and Norva grow to adulthood. The snake who enters this garden is Norva’s new husband Lawrence Hastings, a man she met in London. Hasting is lascivious and greedy, and his plot to seize the Hampton’s family’s wealth almost succeeds. The novel is thought to be set in Yancey County; the time is the early nineteenth century.