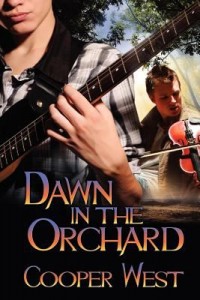 Holden, North Carolina is just about the last place Gary Winston ever wanted to be. He moved away from Insbrook, North Carolina, his own stifling hometown, as soon as possible, and college in Chicago was a convenient excuse. His great-aunt Harriet’s death has brought him back to North Carolina, begrudgingly. She named Gary as the heir to her pecan farm and ramshackle home. The housing market around Holden is poor, so Gary doesn’t stand much chance of selling the place, at least not quickly. And, at the present moment, he doesn’t have anywhere better to go.

Gary’s relationship with his boyfriend Roger has fizzled out. Roger couldn’t admit his sexuality openly and he kept their relationship hidden. Roger’s insecurities rubbed off on Gary and manifested as performance anxiety. A professional musician with a performance anxiety is, Gary recognizes, more than a little oxymoronic. Obviously, Gary’s inability to play in front of an audience has stalled his musical career. Since his anxiety surfaced, Gary has become relegated strictly to some spotty studio work. Broke, he’s been testing the patience of his friends through regular couch-surfing. Thankfully, his burdensome inheritance gives him a place to rest his head at night at the very least.

With the prospect of property taxes and his lack of income, Gary starts hitting pavement around Holden. But, small town that it is, there aren’t many job openings. Nobody around town wants to hire experienced barista from a big city up North. The best option left is the harvest from the pecan farm on Great-Aunt Harriet’s property. Turns out that Harriet had a contract with a local family to gather the harvest and one of the farmers looks quite familiar.

Chuck Everett was born and bred in neighboring Cornerstone, another small Southern town. According to Holden’s resident lawyer, Fred George, the Everett’s have lived in Cornerstone “since before the War.” Chuck harvests Harriet Lee’s pecan crop with his father. He also operates one of the many antique shops in Hogan and plays the fiddle on the side. Gary is attracted to Chuck immediately, but he plays it cool. Chuck comes from an old-fashioned family that expects certain behavior and condemns non-traditional lifestyles, and Gary is not certain if Chuck is gay or straight. After Gary and Chuck safely discern each other’s intentions and interests, their relationship begins to blossom. Novelist Cooper West depicts their intimacy with vivid detail. Whether or not Gary and Chuck’s relationship will thrive, depends upon how well both men can compartmentalize and put aside their other problems.

Comments Off on Cooper West. Dawn in the Orchard. Miami, FL: Dreamspinner Press, 2011.