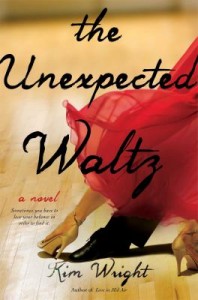 Kelly Wilder Madison finds that she has walked into Canterbury Ballroom in Charlotte, North Carolina, when she meant to walk into the grocery store next door. At fifty-two, she has recently lost her older husband and has no idea what the next step in her life should be. Kelly never thought of making that next step dancing. But Kelly has never believed in accidents either. So when she is offered a free introductory lesson, she takes it and decides to come back for more.

After spending the past twenty years of her life, “pretending to be a whole lot nicer, stupider, and more conservative than she really is,” Kelly must step out of her comfort zone in order to succeed in an activity that requires her to stand out, take big steps, and risk it all. Soon, Kelly realizes that she enjoys the demands put upon her by dance and is feeling more herself than she has in years. At first, Kelly is reluctant to venture into the group class. When she does, she begins to make friends in this new world, which reminds her that there was more to her life before she settled down and became a homemaker.

On the road to rediscovering life, Kelly bonds with Carolina, a young mother in hospice. Carolina shows Kelly that it is never too late to begin anew. Also, Kelly forms an attachment to her dance instructor, Nik, who she longs to protect like he’s the son she never had. Free-spirited Elyse, who has been Kelly’s best friend since their days of youth, also inspires Kelly to breakout. These connections all help Kelly to regain confidence in herself. She gains the courage to confront the fact that she failed her marriage as much as it failed her. She also develops the strength to face the man who got away. Finally, she learns to embrace the little moments that can lead to life changing experiences.

“Kelly is the only one who knew me when we were both young and pretty, when we were impulsive and the world seemed full of men, and we would find ourselves sometimes transported by sex, picked up and carried into situations that, in the muddle of memory, seem a bit like movie scenes. She is the only one who would understand that I am relieved to find a sliver of this girl still inside me.”  So muses Elyse, a 30-something married woman, after a chance encounter on a plane with an amorous investment banker.

That chance encounter makes Elyse rethink her comfortable, but unexciting life.  Should she push for more from her husband? Begin an affair with Gerry? Her circle of women friends–especially Kelly–are are privy to some of  Elyse’s thoughts, but in the end it is Elyse herself who must decide what her life will be.