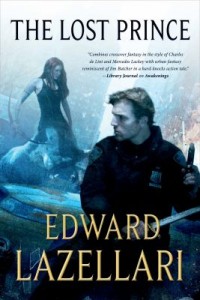 What if your entire life was an illusion? What if you were living a double life — and you didn’t even know it?

In Awakenings, the first book in Edward Lazellari’s Guardians of Aandor series, readers meet Cal MacDonnell, a police officer, and Seth Raincrest, a struggling photographer. At first glance, the two men seem to have little in common – except for one distinguishing characteristic. Both men suffer from retrograde amnesia. They have no memory of their prior lives. Unexpectedly and inexplicably, fantastical creatures begin to hunt down MacDonnell and Raincrest. Over the course of the novel, Lazellari develops, through multiple plot lines and perspectives, that Cal and Set originate from an alternate, medieval land, called Aandor. They traveled to Earth to protect the infant prince of Aandor from a group of assassins. But the prince was lost and their memories were wiped clean after an accident.

With the sequel, The Lost Prince, Cal and Set gradually remember more details about their former lives. During the prologue, more characters experience sudden seizures that return their memories of Aandor. Malcolm Robbe is an industrial titan and the top weapons producer in America. Allyn Grey is the reverend at the First Community Baptist Church of Raleigh. Or so their earthly memories would lead them to believe. Recollections of Aandor and their botched mission complicate their relationships on Earth. Reverend Grey, for example, shocks his family by integrating his pagan beliefs from Aandor with his Christian ministry. And Cal’s wife, Cat, is set on edge when Cal remembers his betrothed, a wealthy and beautiful lady.

However, the search for the prince is the driving action in the second chapter of this series. The guardians, with their refreshed memories, are desperate to get their hands on the prince before the vicious sorcerer Dorn finds him. Dorn is bent on purifying Aandor from supposedly lesser races. He lives in the neighboring land of Farrenheil and wishes to control Aandor.

Daniel, the thirteen year-old prince, stumbles between regular danger and momentary safety. Dorn and the guardians aren’t the only ones searching for Daniel. Law enforcement and the press have branded Daniel as the “teen killer” after murdering his abusive stepfather. For the time being, Daniel is safe, but only marginally so.  Seedy private investigator Colby Dretch has sheltered Daniel with his sister Beverly and her lascivious sixteen year-old daughter, Luanne in a trailer parker situated in the “boonies” of North Carolina. However, Colby doesn’t hold Daniel’s best interests at heart. He has a secret agenda. Dorn employed Colby to locate and deliver Daniel to him. Now that Daniel is willingly in his care, will Colby surrender him over Dorn? Or will Cal and Seth or another one of the newly awakened guardians rescue Daniel first?

Although Lazellari has included enough detail for new readers to catch on to the story, readers might want to start with the first book in the series for a fuller experience given the length and intricacy of the novels and the quantity of characters. Lazellari handles the complexity of the characters’ double lives well. The characters express a range of reactions to their reinstated memories. Some are not troubled by the duality, while others are conflicted by the duality and where they truly belong.

When a writer buys a used desk he finds a diary written by David McGregor, a North Carolina man, over a period of several years in the late 1960s. This book is that diary, which did not record the entirety of McGregor’s daily life, but rather one specific part of it: his torrid affair with his wife’s best friend.

Three of the four novellas in this collection are set in North Carolina. “He’s One, Too” is set in fictional Falls, N.C., which is probably based on the author’s hometown of Rocky Mount. The Practical Heart won the 2002 Sir Walter Raleigh Award for the best work of fiction by a North Carolinian.