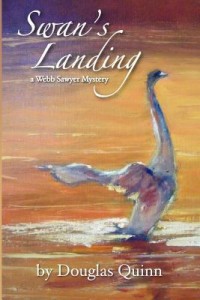 In this the third novel in the Webb Sawyer mystery series, Webb’s son Preston has moved from the Outer Banks to New Zealand, but Preston’s ex-girlfriend, Sunshine Bledsoe, still keeps in touch with Webb.  Sunshine is aptly named–she’s a pretty, cheerful young woman whose sunny nature belies her difficult family life.  When Sunshine’s parents divorced, her dad moved to Richmond, but her mother, a recovering drug addict, remained in the area.  Isabeau and Sunshine’s relationship is a reverse of the traditional mother-daughter one: it is Sunshine who checks in on Isabeau, a waitress with a tenuous hold on financial and emotional stability.

As this novel opens, Sunshine is convinced that her mother is in trouble.  Isabeau’s employer, restaurant owner Amy Overton, has a note from Isabeau saying that  she’s taking a few weeks off for a vacation, but Sunshine doesn’t think her mom had the money for a trip.  Initially, Webb is not inclined to take Isabeau’s disappearance very seriously. Webb is more interested in working on his off-again, on-again relationship with pub owner Nan Ftorek, which is now back on.  Still, Sunshine is someone he is fond of and when he learns that another of Ms. Overton’s employees is also missing, his investigation kicks into high gear.  Webb follows a twisted trail that involves a shady minister, a local developer with a past, and a sadistic cop.  The body count gets high before Webb and the local sheriff bring the bad guys and their enablers to justice. 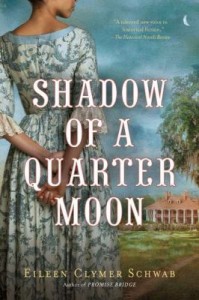 “Jacy Lane, you are nothing more than a foolish quarter moon!” While Jacy is the pride and joy of her father, the wealthy plantation owner Mr. Bradford Lane, she is often the subject of her mother Claudia’s anger. Raised to be a fine southern lady in northeastern North Carolina, Jacy has enjoyed a comfortable existence marred only by her mother’s inexplicable bouts of rage. But her mostly happy life comes to an abrupt halt, first when a cruel landowner foists his ungentlemanly attentions on her, and then when Bradford Lane dies suddenly. When Jacy refuses to submit to the fate her mother Claudia has planned, the woman finally reveals the reason for her ill-treatment of Jacy: Jacy is the illegitimate child of Bradford and his true love, a half-white, half-black house slave. When the young Jacy heard her mother call her a “quarter moon”, she was really saying “quadroon”- a term for a person who is only three-quarters white. Naturally fair-skinned and kept paler with wide-brimmed sun hats, no one, not even Jacy, had guessed her true parentage.

Stunned by this revelation, Jacy begins a transformation. Galvanized by the further discovery that her birth mother and full brother are still enslaved on the plantation, she decides to deliver them, and the handsome horse trainer Rafe, to freedom. It is only when the three are safely away that Jacy realizes her true home is with them, no matter where they are or the color of their skin. Abandoning the relative safety of the plantation, Jacy strikes out to follow her family through the Underground Railroad to the north, true love, and acceptance of her own identity. Along the way she encounters great danger, temporary defeat, and the worst kind of human indecency, but ultimately emerges as a triumphant, strong woman with the ability to look her fears in the eye.

Thomas Senestre delights in sarcasm (if he delights in anything), even if his acerbic commentary remains mostly unvoiced. Recently promoted by default to Lieutenant in the Jackson City Police Department, he knows he leads a tepid life at best; that of a rather inept, single, insomniac policeman eking out existence in a cramped, cockroach-infested apartment. His closest friend and drinking partner is the city undertaker, which seems to fit Senestre’s personality perfectly. So Senestre drinks. And snarks.

This existence is rudely interrupted by a plea for help from a woman claiming to be a friend of his wayward mother. Adora Phelps is being stalked, or thinks she is, and begs her friend’s policeman son to come do some snooping of his own. Suspicious and feeling vaguely put-upon, Senestre nonetheless answers her summons to the small Outer Banks town of Pantego, where he encounters irritating locals, the batty Adora, and water (which he hates). Is Adora truly in danger? Will Senestre unwittingly learn who his absent father was? Will he ever manage to fall asleep?

Z.K. Burrus’ brooding debut novel bites its way to a grisly, suspenseful end. Set in locations based on Elizabeth City and Manteo, North Carolina, local readers may not recognize their sunny home state through the sleep-deprived, cryptic eyes of Thomas Senestre, but they will surely chuckle over his dark witticisms.

The Death Defier, or Diablero, is a creature who once was human but who acquired magical powers that allowed it to escape death.  But maybe death is a better fate than to live as a death defier–a collection of bones and will, memories and hate. The diablero is a creature who takes its energy from the living things it kills.

When some strange deaths occur on Ocracoke Island and in the Great Dismal Swamp, newspaper reporter Hunter Singleton is assigned to the story. Investigating the murders brings him back into contact with his estranged wife, Lisa, but also with his old friend, Jason Summerfield, a museum curator in Pasquotank County.  Summerfield tells Hunter the legend of Blackbeard’s involvement with the black arts and the strange circumstances of the pirate’s death.  Meanwhile, in Virginia, an antiques dealer makes a pact with a diablero that sends the creature back to the Carolinas where Hunter and his allies try to end the killings. This is a tale of magic, greed, betrayal, and revenge.

Check this title’s availability in the UNC-Chapel Library.

Daniel Hartman, the pastor of the Glory Community Church, was introduced in the first novel in this series.  In Glory Be! Reverend Hartman was dealing with division within the church over the use of a $600,000 bequest.  The pastor can be forgiven if he believes that money is the root of all evil because now, in Gone to Glory, he is contending with the fallout from bad investments that caused that $600,000–and more–to evaporate.  The church financial secretary was conned into risky investments by Quentin Fisher, a man who posed as a Christian financial adviser.  Fisher is now dead, and the church is suing the company he worked for.

McKinley Investments is a legitimate company, with insurance to handle suits such as this.  Lori Dorsett, the undercover investigator who the insurance company sends to town, expects that she will quickly find the information she needs to derail the church’s case.  Lori sidles up to Reverend Hartman, hoping that by playing him she can get the inside scoop on the church’s plans.  That’s when things get complicated.

This is the second volume in the Benrey’s Glory, North Carolina series.

A $600,000 bequest has created factions in the Glory Community Church.  The bequest was given to support the church’s music program.  The traditionalists want the church to use the money for a new pipe organ while younger members of the congregation push for equipping an auxiliary sanctuary with instruments and a sound system for more contemporary style services.

Innkeeper Emma McCall is part of the church choir but she hasn’t paid much attention to the controversy.  That changes when a VW Beetle is deposited on her inn’s front porch one morning–along with a note criticizing her lack of support for the contemporary music service.  It seems that there have been a series of pranks around town, possibly related to the church controversy.  The police, including Rafe Neilson, the handsome deputy chief who comes to talk to Emma, think that the pranks don’t rise to the level of crimes.  That changes when Lily Kirk, retired librarian and head of the traditionalist faction, dies in a suspicious car accident. Was Lily’s death related to the church controversy or something in Lily’s past?  As Emma pokes her nose in the investigation, Officer Neilson notices more than just that cute nose.

This is the novel that kicks off the Benrey’s Glory, North Carolina series.

In this third novel in the Benrey’s Glory, NC series, handsome glass expert Andrew Ballantine comes to town to advise Glory Community Church on the replacement of their stained glass window.  When he is poisoned at a Christmas tea party at the Scottish Captain Inn, nurse Sharon Pickard comes under suspicion. Sharon had the opportunity to administer the poison and because of a medical mission trip to Sri Lanka years earlier, she knows all about the poisoned that was used.  As the police investigate the crime, Sharon nurses Andrew back to health.  They fall in love. To prevent another attempt on Andrew’s life, they must race to solve the crime.

Glory is a delightful little North Carolina town. The main street is still intact, there is a lovely bed-and-breakfast, church is important, and the people are nice. Despite all of this, the town has more than its share of secrets and murders. In each volume in this cozy mystery series, a murder happens and an innocent person comes under suspicion. As the murder investigation unfolds, some uncomfortable secrets from the past emerge, but in the end a deserving soul finds romance and justice is done.

Comments Off on Janet and Ron Benrey. The Glory, North Carolina Novels.

When a hurricane blows through town it knocks the steeple off the roof of the Glory Community Church and onto a Storm Channel broadcast van. The weather reporter and camera man inside are injured and one town resident is killed. Town officials blame the church’s administrator, Ann Trask, both because she was in charge of the building and because an incident in her past seems to demonstrate a lack of good judgment under pressure. However, it may be that the victim succumbed to murder rather than the storm. As Ann and camera man Sean Miller try to solve the mystery, they find romance and Ann rediscovers parts of her faith. This is the third of the the Benreys’ series of books set in the fictional Glory, NC, all three of which are part of Steeple Hill Books’ larger “Love Inspired Suspense” series.

As far as anyone knew, the last person to see Nell Cropsey alive was her boyfriend Jim Wilcox, who left her crying on her front porch in November 1901 after he ended their relationship. The people of Elizabeth City, N.C. looked desperately for the young woman, relying on bloodhounds and even psychics in a search that brought national attention to the small town. Nell’s body was finally found floating in the Pasquotank River, a few weeks after she disappeared. Jim Wilcox was accused of the murder, even thought the evidence against him was only circumstantial and he hotly proclaimed his innocence. In this “nonfiction novel,” Simpson dramatizes the true story of Nell Cropsey with the touch of a novelist, relying on first- person narrators and period details to give an intimate look at small-town eastern North Carolina at the dawn of the twentieth century.