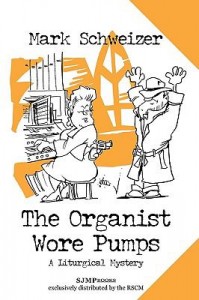 It’s been two years since St. Barnabas Episcopal Church in St. Germaine, North Carolina burned to the ground, and the holidays are just around the corner. Police Chief  Hayden Konig, also the organist at St. Barnabas, is looking forward to a long month of Advent music and writing bad prose between Thanksgiving and New Year’s. Unfortunately, but not surprisingly for those familiar with St. Barnabas, murder and mayhem intervene. First, Old Man Hiram Frost, the town grump, dies after the bank forecloses on his property. At the resulting auction, Hayden gets sucked into a bidding war with a stranger over three cases of French wine. A week later, the mystery bidder shows up again…floating face-first in Tannenbaum Lake. Additionally, St. Barnabas has a new deacon: the aptly named Donald Mushrat (that’s Moo-shrat). Deacon Mushrat is oily, overfond of the word “awesome” and obsessed with tithing. Everyone feels blessed that the beloved Rector Gaylen Weatherall will still be giving the sermons, but thanks to a terrible car accident, Rector Weatherall is put out of action for a time, opening the way for Deacon Mushrat’s pontificating. Even worse, Konig was in the car with Gaylen during the accident…and his arm is broken. A substitute organist is found, and Konig will just have to grit his teeth and endure their “creative differences.” But when another murder occurs and it becomes clear that a killer is stalking St. Germaine, the Chief finds he has bigger fish to fry.

Filled with the hilarity and quirky characters that are distinctive of The Liturgical Mysteries, this book includes a live creche, an inflammatory (literally) Christmas parade complete with a tap dancing Virgin, a scoodle of skunks, and the “liberation” of a priceless medieval reliquary by a gang of hyperactive children trapped in the church for a lock-in. It may be many things, but at least St. Germaine is never boring.