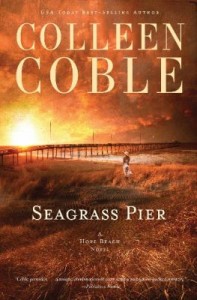 Elin Summerall is taking it easy after a life-saving heart transplant. However, her new heart seems to have other ideas. Elin is having violent dreams – dreams that are flashbacks to her donor’s murder. Elin can’t stand idly by and keep quiet about what she knows, which leads to unwanted attention from the press and unbelief from the authorities. Not to mention that the killer is now stalking Elin. Having lost her husband, Elin is living on her own with her young daughter and aging mother. After a break-in at her house, Elin decides it’s time to get away and takes off to Hope Island, on the North Carolina coast.

The police are doubtful of Elin’s claims that she is having flashbacks to the murder of her donor, but one off-duty FBI agent, Marc Everton, is willing to try anything that may lead to solving this case. Marc’s best friend was murdered while investigating the case. When Marc finds out that Elin received the victim’s heart, he searches her out to get some answers. Captivatingly, Marc and Elin have a history – a history that catches up to Marc when he sees Elin’s five-year old daughter for the first time and realizes that she is his daughter as well. Elin kept his daughter from him for five years, but he doesn’t plan on missing out on any more of her life. Marc doesn’t know if he’ll ever be able to forgive Elin. However, Marc must put his feelings aside and solve this case so that he can keep Elin and their daughter safe. To do this, he’ll have to follow Elin to Hope Island.

Marc lives with Elin and her family on Hope Island while they work together to discover what Elin knows that could lead to her donor’s killer. Living in such close proximity soon causes forgotten passions to rise between the two. Before long, Marc is faced with the option of stepping into a ready-made family, and Elin is hoping for the chance at a love-filled marriage. Nevertheless, someone doesn’t want them together–someone is seeking to silence Elin before she can reveal what she’s discovered. Marc and Elin are in a race against time to unearth the secrets held in Elin’s new heart. Will the couple unearth more than what they are looking for? Is Marc ready to forgive Elin and possibly gain more than just a cordial relationship with the mother of his child? Is Elin ready to take another chance on love?

Seagrass Pier is the third novel in the Hope Beach series. Interested readers should consult our blog posts on the first two novels in the series, Tidewater Inn and Rosemary Cottage.